He lived and worked in Vienna and made a name for himself above all in the field of three-dimensional design ( sculpture , environments , room installations ). But performances , graphics and posters can also be found in his work.

West studied at the Academy of Fine Arts Vienna with Bruno Gironcoli . The first exhibitions followed in the 1980s, but his preoccupation with sculpture began earlier with the so-called “fitting pieces”: free, transportable, indefinable forms made of plaster of paris , paper mache or metal that are placed on the body as supports, prostheses or growths could. Among other things, he wanted to visualize neuroses : "I claim that if you could see neuroses, they would look like this" . Communication and interaction with and through art has always been a fundamental theme of his work. From 1987 onwards, all kinds of seating furniture were created, alienated, ironized, made of prefabricated parts or covered with fabric. The pieces of furniture of recent years also address the question of the boundary between art object and everyday object, which since the early 20th century has become a constant companion of the visual arts, which has been a source of discussion. In 1993 West designed the Austrian contribution to the Venice Biennale . From 1992 to 1994 he was a professor at the Städelschule , Frankfurt am Main. Works by the artist were shown at documenta IX in 1992 and at documenta X in Kassel in 1997 .

West's older brother was the Viennese “worker poet ” Otto Kobalek (1930–1995), a Viennese original in the circle of Helmut Qualtinger . For the 2009/2010 season in the Vienna State Opera , Franz West designed the large picture “Three - From Process to Temperament” as part of the “Iron Curtain” series of exhibitions conceived by museum in progress . In 2011, Franz West was awarded the golden lion at the Venice Biennale for his life's work.

Franz West was married to the artist Tamuna Sirbiladze . He received an honorary grave from the City of Vienna in the Central Cemetery (Group 33 G). The pink grave sculpture was made by former assistants of the artist. For this purpose, a much smaller sculpture created by Franz West was enlarged. The decision to do so was made by his widow and the Franz West Private Foundation after Franz West's death. 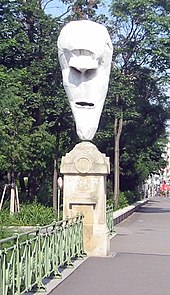