Igls is a village as well as a district , cadastral municipality and locality of the municipality of Innsbruck . On April 1, 1942, the community of Igls was incorporated into both the township and Innsbruck; Igls only became a separate village again from the 1961 local directory . 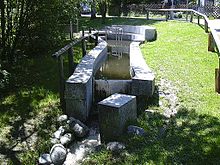 The place is located at  870  m on a low mountain range south of the center of Innsbruck , at the foot of the Patscherkofel . In Igls, the Ramsbach flows to the Viller Bach , and from there, roughly along the Sill-Vill-Steige, into the Sill Gorge to the Sill .

Igls has around 500 buildings with around 2000 residents. The local area also includes Heiligwasser (pilgrimage church with alpine inn) and the Hohenburg and Taxburg castles . 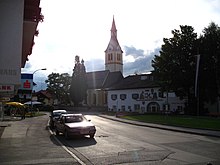 Igler Strasse, with the parish church 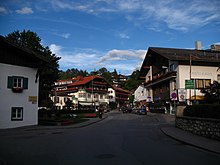 Row graves were uncovered in Igls, which probably date from the migration period. The 1064 m high Goldbichl in the south of Igls is an important archaeological site.

The name comes either from the 11th century by Vogt Eigilis from the Tegernsee monastery , which had possessions in Igls, or from the 8th century from the parish patron, St. Egidius , abbot of Saint-Gilles in Provence , called Gilles . Another possible origin of the name is also discussed as ecclesia (Latin for church), as the Roman settlement Veldidena (today Wilten) is located in nearby Innsbruck and the so-called Roman road is still located in the south.

The former Romanesque parish church has been known from a letter of indulgence since 1286; in the 15th century it was rebuilt in the late Gothic style and consecrated in 1479. In 1705 it was rebuilt again and given a baroque style.
The pilgrimage church Heiligwasser (Maria Schnee / Hl. Ottilie) , built in 1662, stands above Igls at an altitude of 1240 m . The pilgrimage goes back to an apparition of Mary, and the spring near the small baroque church is said to have healing properties.

In the 19th century the rural village developed into a summer retreat for Innsbruckers who had their villas there. The first hotels were built.

Igls gained international fame through the Olympic Winter Games in 1964 and 1976 with the artificial ice bobsleigh and toboggan run as well as the Olympic downhill run from Patscherkofel . The facilities are still used today for international sports competitions (such as the 2012 Youth Olympics ).

In spring 2019, the Schlosshotel Igls was demolished, except for the surrounding property.

The terminus "Igls Bahnhof" of tram line 6 ("Igler" Mittelgebirgsbahn) of the Innsbrucker Verkehrsbetriebe is in Igls . The village is also connected to the public transport in the Tyrolean public transport system by bus line J and N7 as well as by regional bus lines 4132 and 4141 operated by ÖBB-Postbus GmbH . The valley station of the Patscherkofelbahn is also located in Igls . There is a middle station at Heiligwasser, the mountain station - which, like the summit, is in the Patscher municipality - offers a beautiful view of Innsbruck and the Inn Valley.

In the southern forest of Igls there is a freely accessible glacier pot . Hiking signs point to this under the term glacier mill.

The following is a list of personalities related to Igls (in descending order by date of birth):