The Innsbrucker Nordkettenbahnen in Tyrol open up the Nordkette , the southernmost mountain range of the Karwendel .

They lead in three sections from downtown Innsbruck , via the Hungerburg district , to the Seegrube station ( 1905  m above sea level ), and on to the Hafelekar mountain station ( 2269  m above sea level ). The Section 1, of Innsbruck's old town to the Hungerburg is accessible by the cable railway " Hungerburgbahn ", sections 2 and 3, the station Seegrube and Hafelekar by two cable cars with a total of three cabins.

The first pre-concessions for a cable car construction from the Hungerburg to the Hafelekar were granted at the beginning of the 20th century. In 1925, Karl Innerebner discussed his project for a suspension railway on the Hafelekar. But it was not until 1927 that the then still independent municipality of Hötting made a building decision. On July 15, 1927 was the construction of the aerial tramway by the company. Adolf Bleichert & Co. to start, on July 9, 1928, the first 2,885-meter leg was Hungerburg -Seegrube ( 1905  m above sea level. A. ) opened. On July 21 of the same year, the second, upper, 752 m long section Seegrube - Hafelekar was opened. In the lower part of the route there were two cabs in shuttle operation, and in the upper part of the route one car. The station buildings were planned by the architect Franz Baumann .

In the years 1929–1932 297,028 passengers were carried and a profit of 204,481 schillings was made. In 1937, a boarding point was set up at Stütze 3. This was in operation until 1966 and was abandoned after being destroyed by avalanches. In 1940 the Innsbruck municipal utilities took over the railway. In 1945, the Jenbacher works delivered new cabins. In the 1950s, the railway was rebuilt several times in order to increase the transport performance, including a general renovation of the railway from 1958–1960. In 1979 the Innsbrucker Verkehrsbetriebe took over the Nordkettenbahn. In 1996, the Zeller Bergbahnen took over the Nordkettenbahn, which, however, was bought back by the city of Innsbruck after differences over measures to increase its attractiveness. The technical systems became obsolete over time and over a longer period of time led to plans to convert or rebuild the railway.

Renewal of the Nordkettenbahn in 2004

The renewal of the systems was advertised as an international competition in 2004, which was concluded in December of this year with the winning project. The British-Iraqi architect Zaha Hadid , who also designed the new Bergiselschanze in Innsbruck, was in charge of the architectural design . From the end of 2005, work on the slightly modified draft was carried out as part of a public-private partnership . The Innsbrucker Nordkettenbahnen GmbH as a subsidiary of the city of Innsbruck, STRABAG and Leitner AG were involved . STRABAG will operate the railway for a limited period of time, after which the systems will be returned to the city of Innsbruck. The work was completed with the commissioning of the new facilities in December 2006.

The entire project was divided into three sections: the re- routing and construction of the Hungerburgbahn as well as the renewal of the railways between the Hungerburg and the Seegrube station or the Seegrube station and the Hafelekar mountain station. In the technical design of the sections of the Nordkettenbahn, in addition to increasing the transport capacity, aspects of monument protection had to be taken into account. The station buildings designed by Franz Baumann in the 1920s were largely preserved; the necessary changes were carried out under the direction of the architects Schlögl and Süß. The Hafelekarbergstation ( Mühlau area ), the company building and Hotel Seegrube (Hötting area) as well as the Hungerburg valley station (Mühlau area) are listed as historical monuments .

The renovation included minor alterations to the station buildings, the dismantling of facilities that had been added since the construction in 1927/28 and a complete replacement of the technical systems. The new lifts now have a transport capacity of 800 people per hour between the Hungerburg valley station and the Seegrube middle station and 620 people per hour between the Seegrube and the Hafelekar mountain station.

The Seegrube and especially the Hafelekarspitze are vantage points over the city of Innsbruck and the Inn valley as well as the Karwendel .

In summer the area is the starting point for hikes on the Nordkette and in the Karwendel. A few meters west of the Hafelekar station is the entrance to the Innsbruck via ferrata , below the Hungerburg - Seegrube section of the Nordkettenbahn runs the Nordkette single trail , one of the most demanding routes in Europe for freeride mountain bikers. The Goetheweg runs from the Hafelekarhaus of the Nordkettenbahn to the Pfeishütte north of the Rumer Spitze. In winter, the cable car, together with two chair lifts, forms a winter sports area , whose Skylinepark snow park is particularly popular with snowboarders and freeskiers . Famous are the ski routes from the summit of are Hafelekars , particularly in deep snow to reckless piste skiing invite between the mighty rock. At the end of the winter season, many athletes are drawn to the Seegrube for snow gliding . After being renamed Nordpark in the meantime , the ski area has been renamed Innsbrucker Nordkettenbahnen again since 2009 . 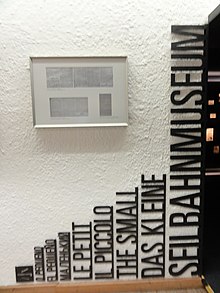 The Small Cable Car Museum has been showing the history of the railway since May 2011 . The museum is located on 15 m² in the valley station on the Hungerburg and is open when the railway is operating.