from Wikipedia, the free encyclopedia
f0

The city ​​center is a district in Innsbruck , which includes the old town founded in 1180 and the later extensions to the south and east, the then Neustadt.

The city center is one of the 20 statistical districts of the city of Innsbruck, it belongs to the parliamentary group and cadastral municipality of Innsbruck . To the west, separated by the Inn , the city center borders on the Höttinger Au and Mariahilf-St. Nikolaus , in the north on the Saggen , in the east on Dreiheiligen-Schlachthof and Pradl  and in the south on Wilten .

View from the city tower over the roofs of the old town to the south to Maria-Theresien-Straße, in the background the Bergiselschanze

The district consists of four statistical districts ( census districts ). The old town (15.0 ha, 1217 inhabitants, 152 buildings; as of April 2014) corresponds to the original settlement founded in 1180 on the right bank of the Inn, it is formed by the Inn and the former city moat (today Marktgraben and Burggraben) and continued to the north of Rennweg limited. The old town is considered to be the nucleus of the city of Innsbruck, even if it is younger than many of the villages that were later incorporated ( Hötting , Amras , Wilten ) and also the original market settlement founded around 1165 on the left bank of the Inn (Mariahilf-St. Nikolaus). The layout of the old town with Herzog-Friedrich-Straße as the central axis goes back largely to the time it was founded. The Gothic character was later redesigned in the Inn-Salzach style.

The statistical district Innere-Stadt-Nord (31.2 hectares, 1384 inhabitants, 140 buildings) is enclosed by Rennweg, Museumstrasse, the railway line, Kapuzinergasse, Kaiserjägerstrasse and Karl-Kapferer-Strasse. Important institutions are the university's theological and social and economic faculties , the state theater and the city halls. A significant part is taken up by the courtyard garden .

The Inner City West (45.6 hectares, 2246 inhabitants, 264 buildings) includes the area around Innrain and Anichstrasse and is bordered by the Inn, Maximilianstrasse and Maria-Theresien-Strasse. This is where the main building and numerous other university facilities as well as the university clinic are located .

The Inner City East (41.8 ha, 1327 inhabitants, 222 buildings) is the area east of Maria-Theresien-Straße, which is enclosed in the north by Museumstraße and in the south by Salurner Straße with Bozner Platz in the center . The majority of the station area also belongs to this statistical district.

Today's inner city on the map of the Imperial and Royal Provincial Capital Innsbruck , around 1840
See also : “History” in the Innsbruck article

At the same time as the first Inn bridge was built around 1165/1170, Margrave Berchtold V (III.) Von Andechs founded a market settlement on the left bank of the Inn, called Ynbruggen or Anbruggen (today's district of Mariahilf-St. Nikolaus ). In 1180/82, through an exchange contract between Berchtold V and Wilten Abbey, today's old town was founded on the right bank of the Inn as an extension of the original market. Between 1187 and 1204 the new settlement was granted city rights. This was surrounded by a curtain wall and a moat (in the course of today's market and castle moat).

However, the city soon grew beyond this limit and a suburb developed along the road leading south to Wilten and on to Brenner , today's Maria-Theresien-Straße. This settlement, known as nova civitas ("Neustadt"), originally belonged to the Hofmarkgericht of Wilten Abbey. On June 5, 1281, Count Meinhard II signed a contract with Wilten Abbey, in which, in return for exemption from the wine tariff, jurisdiction over the Neustadt came from Wilten Abbey to the city of Innsbruck. At that time, however, the area did not extend to today's Triumphpforte , which later formed the border between Innsbruck and Wilten, but to about the height of today's old country house . The part south of it is only assigned to the city of Innsbruck from around 1440. In the first few centuries the Neustadt was mainly home to handicrafts and businesses. The houses were usually made of wood, and it was not until the 17th century that today's buildings were erected in the Baroque and Rococo styles.

In 1315, with the support of Duke Heinrich of Carinthia and Tyrol, the municipal Heilig-Geist-Spital was founded, which, as was customary at the time, was located outside the city walls and which is still reminiscent of the hospital church at the beginning of Maria-Theresien-Straße. Behind it was the hospital cemetery , which was laid out at the same time and served as a municipal cemetery since 1510 and was closed in 1856.

Suburbs also developed on the other two arterial roads, the Innrain to the west and the Silbergasse (today's Universitätsstrasse) to the east. In 1679 the weekly market was moved from the old town to the Innrain. In 1721 a chapel dedicated to St. John Nepomuk was built. It was replaced in 1729–1732 by the baroque Johanneskirche , which for a long time formed the western end of the Innrain.

In addition to the court church built between 1553 and 1563 and the new monastery, the imperial court hospital was located on Silbergasse . From 1561, at the request of Emperor Ferdinand I, the Jesuits built their college here. The Jesuit church was built between 1627 and 1640 . Today's Academic Gymnasium developed from the Jesuit Latin school . With the abolition of the order in 1773, the buildings of the Jesuit college were made available to the newly founded university.

On the occasion of the wedding of Archduke Leopold to the Spanish Princess Maria Ludovica of Spain in Innsbruck in 1765, the Triumphal Gate was built at the southern end of the Neustadt and the moat was filled in.

It was not until the middle of the 19th century that the open spaces between the suburbs were filled with Wilhelminian style buildings and streets such as Museumstrasse or Anichstrasse were laid out. The train station was opened in 1858 and the area between it and Maria-Theresien-Straße was built on as planned. In particular, numerous hotels were built between the train station and Margarethenplatz (today's Bozner Platz). From 1885 to 1889, the first buildings of the city hospital (today's state hospital ) were built at the west end of Anichstrasse and Maximilianstrasse .

As one of the last Innsbruck districts, the city center received an (unofficial) city coat of arms, which was adopted in 1995 by the Association of Downtown Merchants and the Old Town Interest Group. The four-part shield with a central shield shows a golden eagle in the top right field in blue, the coat of arms of the Counts of Andechs . The upper left field consists of the coat of arms of Wilten Abbey . In the lower right field there are two obliquely crossed silver pilgrim sticks with three scallops inserted on the left, right and below as an attribute of St. James the Elder . The lower left field contains the state coat of arms, the red Tyrolean eagle . The center shield shows the Innsbruck city arms. With the symbols of the Andechs and Wilten Monastery, the coat of arms recalls the founding history of the city, which was made possible by Count Berthold's acquisition of the area of ​​today's old town by Wilten Monastery. The attributes of St. James refer to both the patron saint of the parish church, today's cathedral, and the location on one of the old pilgrimage routes to Santiago de Compostela . The Tyrolean eagle reminds us that Innsbruck has belonged to the County of Tyrol since 1263 and has been the state capital and seat of the state parliament and the state government since 1849. 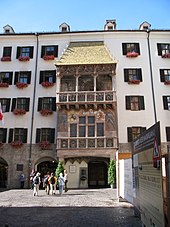 In the old town are Innsbruck's landmark, the Golden Roof , and other sights such as the Helblinghaus , St. Jakob's Cathedral and the Hofburg .

The city ​​tower , next to the Golden Roof, the city's landmark, was built between 1442 and 1450 and was subsequently used as a guard, fire and clock tower as well as a city prison. The city tower is the highest viewing platform in Innsbruck and offers a unique panoramic view of historic Innsbruck.

The Katzunghaus , a late Gothic town house built in the 15th century, stands out primarily through its corner bay window. The reliefs there are works from the workshop of Gregor Türing (born 1543) and show musicians and minstrels on the one hand, and various types of tournaments on the other. The reliefs remind us that knightly fighting games once took place here on the old town square.

The Trautsonhaus is a gothic arbor from the 15th century with a light shaft, which in 1541 under its then owner Hanns Trautson von Matrei, Sprechenstein and Schrofenstein, hereditary marshal of Tyrol, since 1541 Freiherr, by master Gregor Türing its present shape and height as well received the two magnificent bay windows.

The Ottoburg is a late Gothic residential tower at the entrance to the old town and has been documented since 1476. The later Emperor Maximilian I lent the tower to Prince Rudolf von Anhalt in 1497, after his death in 1515 only bourgeois owners followed. Presumably that is why the house was called "Eepurg", "öd Burg" (empty castle) and 1628 "Öttburg" since 1565/1568. Based on this form of name, at the end of the enlightened 18th century, the association with Duke Otto II of Andechs , who was formerly considered the city founder of Innsbruck and is said to have resided here in his "Ottoburg", arose .

The Golden Eagle in Herzog-Friedrich-Strasse was rebuilt after a fire in 1450 and is one of the oldest and, thanks to its porch, one of the most stately inns in Innsbruck. The late Gothic facade frescoes were rediscovered in 1957/1964.

Along Maria-Theresien-Straße there are other sights such as the Anna column , the old country house or the Triumphal Gate . 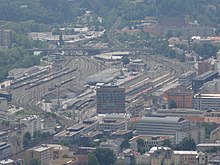 The city center is the seat of most of the city and state authorities ( town hall , country house), many higher schools, the main university building and the university clinic . There are numerous cultural and event facilities such as the State Theater , the State Museum or the Congress House, as well as retail and gastronomy businesses, whereby Maria-Theresien-Straße in particular is a supraregional shopping street and, together with the old town, is also an attraction for tourists.

At the eastern edge of the city center is the main train station , opened in 1858, where the Unterinntalbahn , the Brennerbahn , the Arlbergbahn and the Mittenwaldbahn meet. Together with the market square on the Innrain, the main station is an important hub for inner-city public transport. Next to the main station is the bus station, from which regional bus routes run to the surrounding communities. Almost all bus and tram lines of the Innsbrucker Verkehrsbetriebe  cross the city center.