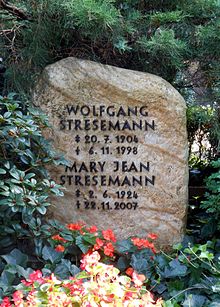 Gravestone of the Stresemann couple at the Dahlem forest cemetery, Hüttenweg 47, 14195 Berlin – Zehlendorf

Stresemann grew up in Berlin, attended a grammar school there and initially studied law, as he originally wanted to go into politics following his father Gustav Stresemann ( Reich Chancellor , Foreign Minister , Nobel Peace Prize Laureate ). At the same time he studied music with Jean Paul Ertel (composition, piano) and with Walther Gmeindl (instrumentation, conducting). As early as the 1920s, he was performing as a conductor in Berlin. In the field of law , he did his doctorate with a thesis on "the case law of the cartel court". During his studies in Heidelberg Stresemann became a member of the Rupertia Association . In 1957 he became an honorary member of the Neogermania Berlin and Bonn fraternity .

Because of the Jewish origins of his mother Käte Stresemann - and the fact that the National Socialists who had ruled his father since 1933 had fought his father politically until his death - Wolfgang Stresemann closed all opportunities to perform and work. Under the impression of increasing persecution of the Jews, Stresemann emigrated with his family to the USA in 1939. There he worked as assistant to Bruno Walter and from 1949 as chief conductor of the orchestra of Toledo (Ohio) , also as a music critic.

In June 1953 Stresemann conducted the Berlin Philharmonic Orchestra for the first time . On August 18, 1953, he married the American pianist Mary Jean Athay (1924–2007) in Munich. In 1956 he finally returned to Berlin and was initially director of the Berlin Radio Symphony Orchestra until 1959 .

From 1959 to 1978 and again provisionally from 1984 to 1986 Stresemann was director of the Berlin Philharmonic Orchestra and thus the man behind Herbert von Karajan .

In his retirement he developed a late career as a writer.

He was buried in the Dahlem forest cemetery. His grave is dedicated to the State of Berlin as an honorary grave . Stresemann's estate is archived in the Berlin Academy of the Arts .

His daughter Christina - former assistant to Jutta Limbach  - is the presiding judge at the Federal Court of Justice .