The Tyrolean State Theater is in Innsbruck . The big house has about 800 seats. The Kammerspiele as a second venue is housed in the neighboring Haus der Musik . The program includes drama , opera , operettas , musicals and dance theater ; the Tyrolean Symphony Orchestra is responsible for the music .

The Tyrolean State Theater is located in the immediate vicinity of the historic old town , surrounded by the Hofburg , Hofkirche , Hofgarten and the SOWI faculty of the University of Innsbruck . Right next to it is the House of Music Innsbruck .

In 1629, the architect Christoph Gumpp the Younger converted it from one of the ballrooms on Rennplatz to a comedy house - Archduke Leopold's large theater . In 1654 a new house built by Christoph Gumpp was opened on the other side of the Rennweg, exactly where the current state theater is. In 1765 the court theater was renovated. During the Bavarian occupation in 1805, the Innsbruck theater was called the Royal Bavarian Court National Theater . In 1844 it was closed due to disrepair. 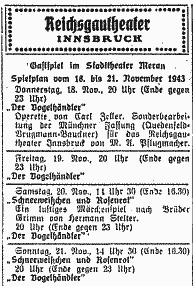 Bozner Tagblatt of November 15, 1943: Performances by the Reichsgautheater Innsbruck in the City Theater Meran

A theater company was established and raised 40,000 guilders for a new building . The new house was opened in 1846. From 1938–1945 the Innsbruck City Theater became the Reichsgautheater Innsbruck , after the end of the Second World War in 1945/1946 the Tyrolean State Theater . In 1959 the Kammerspiele were opened in the basement of the city hall building. The Tyrolean State Theater (Great House) was closed in 1961 and rebuilt and significantly expanded in the following years. It was reopened in 1967. In 1991/1992 the adjacent Kammerspiele were renovated and converted into a flexible room theater.

In 2003 the new rehearsal stage, planned by the architects Karl and Probst from Munich, was completed as an extension to the Great House. With its three venues, the Landestheater meets the requirements of a modern stage operation and ensures that sophisticated theater can continue to take place in Innsbruck. As part of the construction work in 2003, the facade of the State Theater was renovated and the forecourt was redesigned. The city halls with the Kammerspiele right next to the big house were demolished in 2015/2016. The House of Music was opened at the same location in 2018 , with a small studio stage ("Black Box") and the new Kammerspiele with around 200 seats, as well as a rehearsal hall for the Tyrolean Symphony Orchestra and rooms for the Tyrolean State Conservatory and the Institute for Musicology at the University of Innsbruck .

With the founding of the Tiroler Landestheater und Orchester GmbH Innsbruck , an event holding company was created in 2005 . When financing these, the distribution key between city and country was adjusted in favor of the city of Innsbruck (55:45 - this corresponds to a relief of the urban finances of more than 700,000 euros every year). 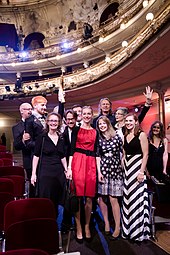 Ensemble, direction and team of Anna Karenina at the Nestroy Awards 2015

In 2015, the play Anna Karenina by Armin Petras, based on the novel by Leo Tolstoy , staged by Susanne Schmelcher, was awarded the Nestroy Theater Prize for Best Federal State Performance .