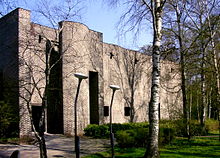 The Markuskirche ( Swedish Markuskyrkan ) is a church in Björkhagen in the Skarpnäck district , south of Stockholm . The church building from the 1960s became known for its consistently brutalist architectural style by the architect Sigurd Lewerentz .

After an architectural competition that was advertised in 1955 and in which Peter Celsing and Sigurd Lewerentz also took part, Lewerentz was awarded the contract. Lewerentz had made a name for himself since the 1920s through his structural contributions to the forest cemetery in Stockholm ( Skogskyrkogården ), which is now a World Heritage Site .

Construction work began in 1958. The project developed into a form of work between the architect and the construction workers, especially the bricklayers, unusual for modern times. Lewerentz's constant presence at the construction site created a kind of construction hut with a high level of mutual respect and trust among those involved. A few anecdotes arose in this construction hut, which also illustrated that Lewerentz had very clear and strict views. One tiler said that if he did it the way Lewerentz wanted, “he wouldn't get it right now”, to which Lewerentz replied: “Straight ahead, straight ahead, why does everything always have to be straight? It should be pretty, no matter if it's crooked ”. He had the following exchange with a plumber. The plumber: “Can I do it like I always do?” Lewerentz: “No, I know one thing. That's the only thing you shouldn't do. "

Lewerentz consistently implemented his brutalist architectural style in the Markuskirche. The appearance of the facades and the interior are determined by red, coarse brick and wide, unpressed plaster joints. You look in vain for cover strips, skirting boards and door frames . The electrical lines are deliberately visible on the masonry and thus form their own architectural means of expression. The insulating glass panes of the windows are placed directly in the wall openings without a frame, only with permanently elastic cement. The painting work is extremely economical, natural materials such as brick, clinker tiles and beams made of glued laminated timber determine the colors.

The artistic decorations, such as baptismal fonts, altar decorations, church silver and candlesticks, were designed by the artist couple Barbro and Robert Nielsson. The Bronsfontaine, "lotus flower", on Spiegeldamm in front of the main entrance was also made by Robert Nielsson.

It took five years to build, from 1958 to 1963. Even during the construction period, the church attracted a great deal of attention in Sweden and internationally. In 1962 Sigurd Lewerentz was honored with Sweden's most prestigious architecture prize, the Kasper Salin Prize , for the St. Mark's Church.