The Museum of Asian Art is an art museum of the Berlin State Museums and is located in the Humboldt Forum in the Berlin Palace . Founded in 2006 by the association of the Museum of East Asian Art and the Museum of Indian Art , it consists of the South , Southeast and Central Asia art collection with approx . 20,000 objects and the East Asian art collection with approx. 300 objects. The former is one of the most important collections of its kind, the latter lost in 1945 by shipments as looted art in theSoviet Union the majority of their holdings.

Today's museum includes objects of art , handicrafts and archeology from the East , South , Southeast and Central Asian cultural areas. Parts of the collection go back to the art chamber of the Brandenburg-Prussian Great Elector in the Berlin Palace , from whose holdings the Museum of East Asian Art was founded in 1906 as the first of its kind.

In 1963, the Museum of Indian Art emerged from the Indian department of what was then the Museum of Ethnology . In December 2006 the two collections were combined in the Museum of Asian Art. Until January 8, 2017, the museum was located in the Museum Center Berlin-Dahlem . After several years of closure, the museum is scheduled to reopen as part of the Humboldt Forum in the Berlin Palace from late summer 2021 .

Wilhelm von Bode , General Director of the Royal Museums in Berlin, founded the Museum for East Asian Art in Berlin in 1906. The collection grew through donations, among others from the patron Marie Meyer and the ethnologist Ernst Grosse . Initially, it was located on Museum Island . In 1924 the exhibition moved to the building of the Kunstgewerbe-Museum , which at the time also housed the Museum of Prehistory and Early History and later the Art Library . In 1926 the German Society for East Asian Art was founded to support the museum . Thanks to its consistent expansion, the collections were among the most important internationally until the Second World War .

After the end of the war, the Soviet military administration in Germany transported around 90 percent of the stocks to the Soviet Union as looted art through “trophy commissions” . They have been in the Hermitage in Saint Petersburg ever since . Only a few pieces returned to Berlin. The almost complete loss meant a deep turning point and made it necessary to rebuild the collection, which could only be carried out gradually. From 1952 the Pergamon Museum served as an exhibition space for East Asian art. Because the Pergamon Museum was located in East Berlin in divided Berlin, the Museum Center Berlin-Dahlem in the Zehlendorf district was used as a separate exhibition space in West Berlin from 1970 onwards .

After the fall of the Berlin Wall , a reorganization of the Berlin museum landscape began with German reunification . The two separate collections were merged at the Dahlem site in 1992 and expanded in 2000.

The collection originally belonged to the Museum für Völkerkunde (today: Ethnological Museum ) founded in 1873 , from 1904 as the "Indian Department". The four " Turfan Expeditions " established the collection on Central Asia between 1902 and 1914 and expanded it continuously. The Second World War, however, led to a painful loss of inventory, partly due to the destruction of the museum building, partly due to the transport of a large number of art objects to the Soviet Union as looted art .

After the end of the war, the collections that had previously been outsourced were brought together in Dahlem in 1956/1957 and presented a few years later at the instigation of the first director Herbert Härtel as part of an independent "Indian Art Department". On January 1, 1963, the Museum of Indian Art was created from this. In 1993 the Society for Indo-Asian Art Berlin was founded as a sponsoring association and publishes the Indo-Asian magazine once a year .

From 2010 to 2018, Klaas Ruitenbeek headed the Museum of Asian Art. Lars-Christian Koch has been director of the Museum of Asian Art together with the Ethnological Museum since 2018 . The reopening of the museums as part of the Humboldt Forum in the Berlin Palace took place on September 22, 2021 with the participation of Federal President Frank-Walter Steinmeier. 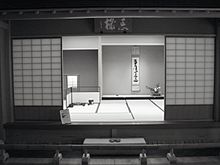 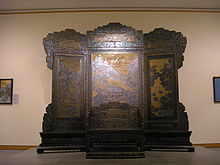 Travel throne ensemble from the imperial workshops at the beginning of the era of the Kangxi emperor (1662–1722). The screen shows the western paradise - mythologically located on the Kunlun mountain - with scenes of mountains, valleys, seas, terraces, lakes and palaces. It depicts the arrival of his ruler - the Queen Mother of the West ( Xiwangmu ) - who, riding a Fenghuang, awaits the arrival of the Eight Immortals. 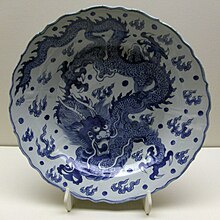 Porcelain bowl from the Ming Dynasty

The collection encompasses the entire South , Southeast and Central Asian region, with particular emphasis on the art genres of sculpture (South and Southeast Asia) and wall painting (Central Asia). The objects date from the 3rd millennium BC. Chr. To the present. The permanent exhibition in Dahlem showed stone, bronze, stucco and ceramic sculptures and stone reliefs with Hindu , Buddhist and Jain themes as well as wall paintings, clay sculptures and textiles from Buddhist cult facilities on the Northern Silk Road (today: Xinjiang , PR China ) , Indian miniature painting and precious handicrafts from the Islamic Mughal period .

Stone, bronze and wood sculptures as well as cult objects from Nepal , Tibet and Southeast Asia complete the overview of the artistic creation of the Indo-Asian cultural area. Particular highlights are the important Gandhara collection ( Pakistan and Afghanistan , 1st – 5th centuries) and the replica of a Central Asian Buddhist cult cave using large parts of the original surface. In the courtyard there is still an artificial stone copy of the east gate of the famous Stupa  I of Sanchi in central India .

The East Asian Art Collection houses the largest and most important collection of Chinese , Korean and Japanese art in Germany. With around 13,000 exhibits, the holdings encompass all cultural epochs from the Neolithic to the present day.

The permanent exhibition in Dahlem presented the three countries of the Asian sub-region separately. A central room showing the art of Buddhism united the galleries, as Buddhism can be found as a common element in all three cultures. The Chinese department showed, among other things, its extensive inventory of porcelain work , which has been significantly enriched by the Georg Weishaupt collection , and lacquer art . More than 3000 years old bronzes , jade objects and ceramics bear witness to the country's early civilization and high culture . A porcelain goblet from the later era of Emperor Wanli (1573–1620) from the Ming dynasty is of outstanding cultural and historical importance. Furthermore, a traveling throne of the Chinese Emperor Kangxi from the 17th century was exhibited in a separate room . To him a unique part folding screen made of rosewood , it is rich with mother of pearl inlays in paint - and a gold background decorated.

In its China-Japan gallery, the museum used selected examples to present the art of writing and writing, which was originally the central collecting area of ​​East Asian art. Since many works of the Chinese script and Japanese script as well as some old pictures are particularly sensitive to light, they were shown in temporary exhibitions and exchanged after three months. The same was true for many exhibits of lacquer and textile art . The connection with the Japanese woodcuts and the important graphic collection of the museum always resulted in new contexts and focuses. In the Japanese section, a Japanese tea room (Bôki) opened up to visitors to the exhibition . There you could also attend the Japanese tea ceremony (Sadō) at certain times by prior arrangement .

A study collection offered interested museum visitors the opportunity to gain an in-depth look at the collection, an attached reference library is only accessible to specialist visitors.