Nandi ( Sanskrit नन्दी nandī , m., "The lucky one"), a humpback bull in Hindu mythology , is the mount ( Vahana ) and the faithful servant of the Hindu god Shiva .

Sometimes Nandi leads Shiva's retinue, the Ganas ; he almost always acts as a guardian and guardian of the threshold before every Shiva- Linga as well as before the temples of God. In a few temples, however, he is himself a revered center. He is also the patron god of the four-legged animals and the four corners of the world.

Relief stele depicting Uma-Maheshwaras (= Parvati and Shiva) on Mount Kailash with Nandi in front of it, Bihar (10th / 11th century).

Mythology names Kashyapa as Nandi's father, who is identical with the creator god in the shape of a turtle, Prajapati . The mother is considered to be Surabhi , the “original cow” and wish- fulfiller . Nandi is Dharmadevata - Lord of Dharma , embodiment of the eternal law. One of the many stories tells how Nandi Dharmadevata was frightened one day by the ever-circling infinity. In his desperation and looking for a way out he came to Shiva and threw himself at his feet. He begged to take him as a mount. In his answer, Shiva points out the increasing weakness of the Dharma in the various ages , assumed in Hinduism : “I am happy to do that, Lord of the Dharma. In the golden age you will walk on all four legs without discomfort. In the silver age on three and in the copper age on two legs. In the dark, iron age you will eventually have to laboriously stand on one leg.

The protection of the cattle is one of the fundamental characteristics of Hinduism. Dyaus Pita (Father Heaven) and Prithivi Mata (Mother Earth), the oldest pair of gods in the Vedas , are symbolized by the bull and the cow. The cow is worshiped as a living animal, while the bull plays a major role in Hindu inconography as the companion animal of several deities, such as Yama , the lord of death and righteousness. In the struggle of the goddess Durga , the bull embodies the evil she has overcome. The meaning of Shiva's humpback bull seems to be contradicting itself, on the one hand it is the ardent admirer of Shiva and the embodiment of his creative aspects, on the other hand it embodies like Shiva transience and destruction. 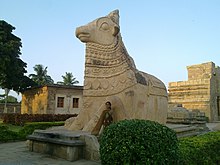 The iconography often depicts him as a resting animal in front of a Shiva shrine, with the representations becoming larger and larger over time and reaching significant proportions, especially in southern India ( Karnataka , Andhra Pradesh , Tamil Nadu ). While the smaller Nandis are often protected by a canopy-like stone construction that is open at the side, the larger ones are mostly in the open air. In many cases, nandis are also placed inside the vestibule ( mandapa ) of a temple.

In medieval India popular stele images show him how the "Holy Family", consisting of Shiva and his wife Parvati (sometimes with Ganesha) carries on his back.

In his extremely seldom depicted anthropomorphic figure, he appears as Nandikeshvara , a man with a bull's head, three eyes and four arms. This shape is similar to that of Shiva, with the deer in one hand and the battle ax in the other, but only Nandikeshvara folds two of his hands in prayer. He worships his Lord with total devotion ( bhakti ).