A bronze picture , also called bronze for short , is a work of art made from bronze . The process of " casting in lost form " was already masterly mastered in antiquity. In addition to casting, there is also the technique of driving the metal for flat objects , see Toreutic .

Important Greek bronze works are known from the classical era, which were already famous in antiquity and were copied many times, especially in the Roman era. One of the most famous masters was Praxiteles , whose stone sculptures were not only distributed in bronze replicas , but who also created numerous bronze works of his own. In addition to Praxiteles, Skopas and Lysipp were popular, around 1500 ore sculptures were ascribed to the latter, although mostly only copies have been preserved. These late classical masters, in turn, went back to the great models Polyklet and Pheidias . Originally, every successful competitor in Olympia, Corinth and Nemea had the right to set up their own bronze sculpture in the sanctuary. In the Christian era a great many bronzes were smashed and melted down. As a result, very few bronzes from the early period have survived. In recent times, however, a number of bronzes have been recovered from the sea. On the basis of these finds, the high manufacturing art of the foundry trade could be studied: copper, tin and lead were heated to 1000 degrees and poured into clay molds. Studying the technology not only made it possible to distinguish between the original and the copy more clearly, it also became clear that the bronzes in the Classical and Hellenistic periods were produced in a few workshops in a central location, mostly in the Naples area . From there, the finished statues were transported in small sailing ships across the Mediterranean to Egypt, Spain and Sicily, as well as to the Greek colonies in Asia Minor. There they were placed as jewelry in the villas of rich nobles.

The Lex de imperio Vespasiani (69 AD) is famous ; this plate is now kept in Rome in the Capitoline Museum . Other works made of bronze, which were placed together with this plate on Lateransplatz in the Middle Ages , are: the Capitoline she-wolf , an equestrian statue of Mark Aurel (reinterpreted as “Constantine Rider” in the Middle Ages), the thorn extractor and fragments of the colossus .

Most of the ancient bronze portraits are likely to have been melted down in late antiquity or in the Middle Ages. The bronze figure of the Capitoline Wolf was long considered Etruscan ; however, according to more recent findings, it only dates back to medieval times. Many Roman sculptures are considered copies of Greek models - a suspicion that does not exist in the case of the bronzes from Volubilis ; these are usually in the 2nd / 3rd Dated 17th century AD.

In the 5th or 6th century the equestrian statue of Theodoric was made in Ravenna , which Charlemagne brought to Aachen (probably destroyed as early as the 9th century). The last Roman bronze portals were made in the 5th century.

Large bronze doors and some other objects such as candlesticks, baptismal fonts, grave slabs and figurative representations have been preserved from the Middle Ages . 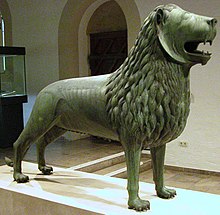 North of the Alps there were probably several workshops throughout the Middle Ages (e.g. initially in Aachen , later in Hildesheim , Magdeburg and in the area around Liège ).

The pine cones in Aachen Cathedral were considered antique for a long time; According to more recent findings, it may not have been produced until around the year 1000.

The " Braunschweiger Löwe " erected by Heinrich the Lion around 1166 on the square in front of the Brunswick Cathedral is the oldest surviving large-scale sculpture from the Middle Ages north of the Alps and the first larger figurative hollow casting since ancient times . The original has been in the medieval department of the Herzog Anton Ulrich Museum , Dankwarderode Castle , since 1989 to protect it against harmful environmental influences . Since then, a true-to-original copy can be seen in front of the cathedral.

Further works from the Romanesque period in Germany: Sog. Helmstedter Kreuz (today in the treasury of St. Ludgerus in Essen- Werden ), tomb slab of Rudolf of Swabia (in Merseburg Cathedral ), Crodo altar (so-called Kaiserstuhl in the cathedral porch in Goslar ), tungsten candlesticks (in Erfurt Cathedral ).

Significant works of the Middle Ages and the Early Renaissance in Italy are: bronze ball of the cathedral of Siena (1264), architrave relief of the Porta della Postierla in front of Orvieto (1274), statue of Peter in St. Peter in Rome (1280) - these works were done by someone from Germany Foundry named "Rosso" made in full casting. Pieces soldered together are the statue of Boniface and the doors of the Baptistery of San Giovanni in Florence by Andrea Pisano (1336) and Brunelleschi (1401); the doors made from one piece by Lorenzo Ghiberti already belong to the Renaissance (completed in 1424).

The small figure of a dancer from Mohenjo-Daro , which dates back to the 2nd or 1st millennium BC, is considered the oldest preserved bronze sculpture in the world . Is dated. Bronze casting experienced a heyday during the rule of the Tamil Chola dynasty (10th – 13th centuries) in southern India.

China is considered one of the most important countries for bronze casting in East Asia. In the Middle Ages, influences from India and Southeast Asia made themselves felt again in Tibet and Nepal, but mainly only small bronzes were produced. Bronze sculptures were also known in Vietnam and Korea.

There are three types of refills. For example, after the first sample copies had been cast, Arno Breker released the mold for a limited edition, of which the foundry still makes high-quality castings. If a mold no longer exists, copies that are true to the original can be made. In addition, there are the coarse casts, which, however, differ considerably from the original in the details.