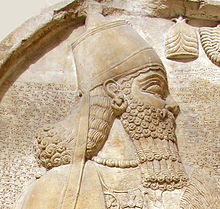 Aššur-nâṣir-apli on a stele from the British Museum in London .

Aššur-nâṣir-apli II. On the lion hunt, relief in the Vorderasiatisches Museum Berlin in the Pergamonmuseum .

Aššur-nâṣir-apli II. (Also Ashur-nasir-apli , Assur-nasirpal ) ruled as Assyrian king from 883 to 859 BC. He was the son of Tukulti-Ninurta II.

Under him the New Assyrian Empire regained the dimensions of the time of Tukulti-apil-Ešarra I. Campaigns Aššur-nâṣir-apli u. a. against Babylon and Urartu . In a campaign against the Arameans , 300 talents of iron were mentioned as spoils of war, which show the economic boom of the Arameans.

The accounts of his conquests are written in exaggerated phrases. The flat mountain range of Jabal Bishri southwest of the Euphrates is described as high mountains, the tops of which birds cannot reach .

The tributes and the booty were needed, among other things, to finance construction projects in Aššur , Nineveh and Kalḫu . Aššur-nâṣir-apli moved the capital from Assur to Kalḫu. The inauguration of Kalḫu was celebrated for ten days. Around 70,000 guests were present (Assyrians, foreigners from at least twelve countries, including Sidon , Tyros , Muṣaṣir , Kumme , Gurgum , Gilzanu and Melid ), as described on the banquet stele . The palace also had a beautiful garden. In Imgur-Enlil he built a temple of the dream god Mamu , whose gates he had decorated with bronze reliefs.

Aššur-nâṣir-apli carried out administrative reforms. A tight network of messengers made it possible to get news of uprisings quickly, which could thus be nipped in the bud. Under Aššur-nâṣir-apli II, the deportations were expanded on a large scale. His successor was his son Salmānu-ašarēd III. His wife was Mullissu-mukannišat-Ninua , who was also the mother of the successor.