The New Babylonian Empire (also late Babylonian Empire and Chaldean Empire ) was a large empire of the late Babylonian period , which lasted from 626 to 539 BC. Existed. The kings of this empire are often called Chaldeans , although the rulers did not call themselves that. The use of the term goes back to the Old Testament and Greek authors. The actual origin of the neo-Babylonian rulers has not yet been clarified. The empire ended in 539 BC. With the subjugation of Babylonia by the Achaemenids (who founded the Old Persian Empire). 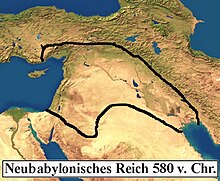 New Babylonian Empire, around 580 BC Chr.

Nabopolassar allied with the still in and around Mannai living Medes , who later also the legacy of the Elamites competed in the East. The son of Nabopolassar was married to the granddaughter of the Medean king. Through this alliance the way to Nineveh , the Assyrian capital, was free. In 614 BC Kalach ( Nimrud ) was razed to the ground and 612 BC. Nineveh fell after a three-month siege. Until 610 BC The scattered Assyrian armies were completely wiped out. The subjugation of the Assyrian cities lasted until 605 BC. When Nabopolassar died, after which Nebuchadnezzar II (605–562 BC) immediately hurried to Babylon to take the throne. During his reign, Nebuchadnezzar developed extraordinary skills as a statesman, military leader, peacemaker and builder; for example the hanging gardens of Babylon are ascribed to him. His reputation in the world at that time was so great that he was used as a peacemaker between warring tribes.

Nebuchadnezzar had the temples rebuilt in all the cities of the country, built canals, the so-called Median Wall and the processional street with the Ishtar Gate . He promoted agriculture , horticulture and trade so that the economy quickly recovered and flourished.

The Median Wall was a 20 Parasangen (personal measure, approx. 110 km) long, approx. 3.2 m high and 6 m thick wall, which was built from mud bricks and bitumen between the Euphrates and Tigris approx. 37 km north of Baghdad Babylonia was supposed to protect against incursions by the Medes in the north, hence the name Median Wall . The Greek Xenophon mentions it around 401 BC. In its anabasis .

In connection with the usual extensive destruction, Nebuchadnezzar II subjugated the small states in Syria and the Levant and made the subjugated countries subject to tribute . Judah attempted at least one insurrection, but it was suppressed and resulted in Jerusalem being destroyed, according to biblical tradition. Parts of the population were exiled to the city of Babylon or taken to other new places of residence in the Babylonian Empire (e.g. Nisibis ). From Babylonian documents it can be seen that soon afterwards high positions were held by parts of the exiled population. The return from Babylon only took place in the years after the city was conquered by Cyrus II.

In 562 BC BC Nebuchadnezzar died and left his son Amel-Marduk a well-ordered and consolidated empire. After only two years, Amel-Marduk was killed in an uprising and the Babylonian general Neriglissar ascended the throne. Severe disputes with the priesthood finally led to the fact that 555 BC BC Nabonidus seized the throne through a revolt. Nabonid was a follower of the god Sin and thus drew the wrath of the Marduk priesthood. This brought him violent disputes over the reorganization of the agricultural and leasing system.

After the Persians conquered the Lydians , it was only a matter of time before they would attack Babylonia as well. Nabonidus wanted to counteract the impending danger through strategic measures and returned from his voluntary exile from the Tayma oasis . He also had the most important statues of gods in the country brought to Babylon as assistance. His son Belshazzar , who had represented Nabonidus during the exile, now handed over the government office to Nabonidus.

In Babylon, the dispute between Nabonid and the priesthood was so advanced before the return that Cyrus II offered himself up to the priesthood as the new ruler in his absence. After a brief battle in which Nabonidus was defeated, the Persians marched on October 6, 539 BC. BC entered Babylon without a fight. On October 22nd, Cyrus II followed into the city to the triumph and jubilation of the priesthood.

The Aramaic language became the lingua franca. The scholars continued to use the Akkadian language and the cuneiform script. Many scholars from Egypt , Persia , India and Greece came to expand their knowledge. During this time Chaldean astrology was developed from the astral teachings of the Babylonians , which later formed the basis for the Hellenistic.

Dependents (oblates) could be given to temples to serve a certain deity. However, they were not considered slaves. In addition, the great temples also had slaves who were marked with the symbol of the corresponding deity.

There is numerous evidence of the existence of slaves ( ardu or qallu ) from the Neo-Babylonian period . They are not mentioned in the Neo-Babylonian laws, but the sale of a slave was evidenced by a cuneiform document from numerous private archives. Slaves could also be given away as part of a dowry, and often they were loaned out to pay a debt. Often the slaves were born in the household, but prisoners of war were also sold. Criminals have also been sold into slavery, but bondage seems to have been rare. Slaves were also given to craftsmen as apprentices, and the contract often stipulated penalties if the craftsman did not train them accordingly. The release of a slave was also recorded on a clay tablet.

Kings of the New Babylonian Empire