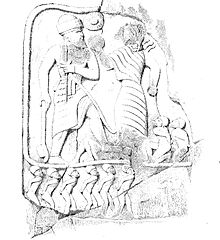 Anubanini, king of the Lulubi. The relief is located in the Iranian province of Kermanshah .

The Lulubi (also Lullubu or Lulubäer ) were a since about 2250 BC. Evidence of a tribe that was probably related to the Gutaeans and / or Subartu and until around 880 BC. Is occasionally mentioned. The ruler Shulgi mentions a campaign against Lullubum, which cooperated with Simurrum, Urbilum and Karahar, who probably also belonged to these mountain peoples. The Lulubi rebelled among the Guteans. The name is almost only known from Akkadian and Sumerian inscriptions and denotes mountain dwellers, in this case, inhabitants of the Zāgros Mountains or the Iranian highlands . These are peoples without writing, about whose language, culture and mythology practically nothing is known. Most mentions imply that they are neither Hurrians nor Assyrians, Sumerians, Akkadians or Babylonians. Nevertheless, as bearded people, they are portrayed more of a European appearance with clothing similar to, but not identical to, the Akkadians.

They became known through a rock relief in Sarpol-e Sahab , which shows the armed king Anubanini , together with a goddess (possibly Inanna / Ištar ), standing on defeated enemies. The frequent mention at this time underscores that they were definitely a power factor in Mesopotamia, which one cannot exactly define. The Lulubi often undertook raids to Mesopotamia , but are only mentioned every few centuries, most mentions come from the Akkad / Ur-III period. In the Erra myth they appear as enemies of the Babylonians and their wives are portrayed as a kind of witch, which Babylonian called Maqlû . Fincke identifies them as Lullu or Lullim in Shusharra's ancient Babylonian texts . The name Lullāyu appears in Central Assyrian texts, and the name Lulume appears next to Zamua among the enemies of Adad-narari II. The Lulubi are also mentioned in the epic "Lugalbanda and the thunderstorm bird" ( Lugalbanda and Anzu ), according to which Lugalbanda received the divine properties of power, speed and flying from the thunderstorm bird Anzu.

The regions that these mountain tribes inhabited roughly coincide with today's Kurdish language areas and were probably similarly fragmented. Presumably they are Indo-Iranian ancestors of different peoples who appear under a new name much later. However, this is only one of many possibilities.

The boundary between Lullubum and Gutium is unclear. Horst Klengel assumes that the range of Lullubium was significantly expanded in the first millennium.

Zadok doubts that the Lulubi really existed as a separate ethnic group.

Some scientists identify the settlement area with Zamua in the central Zāgros region.

Their settlement land is identified by Frayne in an inscription in modern Halabja as Lulubuna .

No language certificates have survived. In 1930 Speiser submitted a list of Lullubean names, but this is not completely reliable.

Speiser and Klengel follow Hüsing's argument that the language is related to Elamite , whereby Speiser assumed a relationship with Lurestan . The only known word of their language for sure is ki-ú-ru-um , it corresponds to the Akkadian word for God . 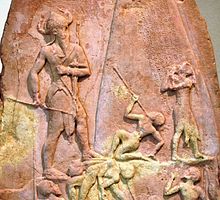 The Lulubi under their King Anubanini were defeated by Naram-Sin of Akkad . The 2 m high Narām Sîn stele (now in the Louvre ) shows the king in a short apron, with a bare upper body and with a crown of horns , as he faces the defeated Lulubi in the mountains. He wears a bow and club and holds an arrow in his right hand. It is difficult to decide whether the enemy is killing himself with a spear or is struck by the Great King's arrow. The stele was originally set up in Sippar , but was found in Susa , where it was carried off by the victorious Elamites .

The Sumerian King Sulgi of Ur undertook campaigns against the Lullubians in the 44th and 45th year of reign , according to the year name .