This article covers the city in Israel. For more meanings, see Nazareth (disambiguation) .

Together with its sister city Nof HaGalil , until 2019 Nazareth-Illit ('Upper Nazareth'), both cities have a population of 118,233 (as of 2018); Nof HaGalil has 41,169 inhabitants and Nazareth 77,064. Nazareth is a very old city and today it is primarily inhabited by Muslims and Christians . Nof HaGalil is much younger and is mainly inhabited by Jews. Nazareth and Nof HaGalil are two independent cities and have separate administrations.

The place is not mentioned in either the Tanakh or the Talmud . Its special significance lies to this day in the fact that it is considered the hometown and father city of Jesus for Christians . According to the Gospels , his parents, Mary and Joseph , lived here . In Nazareth the Archangel Gabriel came to Mary and announced the birth of the future Savior ( Annunciation of the Lord ). Since the census of the Roman Empire was taking place at this time , according to the Gospel of Luke all heads of families had to go to their place of birth ( Lk 2,3  LUT ), which is why Joseph moved with the heavily pregnant Mary to Bethlehem , where Jesus was born. According to the Gospels, however, he grew up in Nazareth, where his family returned ( Mt 2.23  EU ; Lk 2.39  EU ). In the Gospels and the Christian tradition, Jesus himself is therefore also referred to as “ Nazarenes ” (e.g. Mk 1.24  ELB ), which means his origin “from Nazareth” (see Lk 4.16-24  ELB ).

The earliest non-Christian mention of Nazareth is an inscription from Caesarea Maritima from the late 3rd or early 4th century, in which the place is named as the seat of one of 24 orders of priests.

Today Nazareth is one of the most important pilgrimage sites in the Holy Land . The Roman Catholic Basilica of the Annunciation , consecrated in 1969, rises at the place where, according to tradition, the house of Mary stood and the Annunciation Angel came to her . It bears the inscription Hic verbum caro factum est - "Here the word became flesh".

The old town of Nazareth lies in a hollow in the terrain. The hollow is almost 100 m lower than the range of hills that surrounds the city in a horseshoe shape. The slopes rise moderately steep. Today they are almost completely built over.

Nazareth is located on the approximately 1,100-kilometer Israel National Trail and the Jesus Trail . Day hikers can also discover culture and historical impressions around Nazareth, e. B. following the Israel Trail hike the mountain Arbel.

Due to the lack of any mention of the town of Nazareth in the Tanakh, in the Talmud or in extra-biblical sources from the first and second centuries (such as Flavius ​​Josephus ), its existence at the time of the birth of Jesus itself has been questioned since the 19th century. Archaeological excavations have proven that the area around today's city has been settled since the 2nd millennium BC: A grave field found in the mountainside goes back to this time, and an Iron Age village goes back to the 13th century BC. The remains of a small village founded in the late Hellenistic period ( between 141 and 30 BC ) were also uncovered. 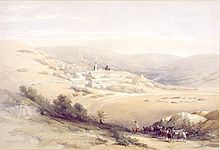 The archaeological findings suggest that the area around what is now Nazareth was very sparsely populated in the 1st century. At the top of one of the slopes, agricultural buildings from that time could be discovered, the remains of terrace walls and the foundations of three towers. In addition, a grave was found during excavations by Ross Voss and Stephen Pfann from 1996. Another twenty Jewish graves from Roman times have been excavated. This order of magnitude can indicate a family grave or, at best, be assigned to a smaller family clan. However, the current interpretation of the University of the Holy Land suggests an associated settlement, the population of which it estimates at 200 to 500 people. In 2009, during excavations by the Israel Antiquities Administration near the Annunciation Basilica, the first remains of a house from the early Roman period were found, which allow conclusions to be drawn about the conditions at the time of Jesus. It was a small, modest house with two rooms. In the courtyard belonging to the house there was a cistern carved into the rock. The found fragments of dishes suggest that they were used by Jewish residents. The remains of a synagogue reported in the New Testament ( Lk 4.16  EU ) were not found.

Jews lived here until the 7th century AD . The Crusaders built a large Franciscan basilica in place of the Byzantine church built by Constantine . Since the Middle Ages , the city has been mainly inhabited by Arab Christians .

Nazareth is now the city with the largest community of Arab Israelis in Israel. In the old town area, the city mainly consists of small streets with an Arab market.

A large mosque had been planned to be built in the immediate vicinity of the Annunciation Basilica since 1998 . Because of these plans, there were several sometimes violent clashes between Christians and Muslims. On January 9, 2002, the Israeli security cabinet put a stop to construction. In 2003 the Magistrate Court in Nazareth rejected the construction of the mosque and ordered the removal of the illegally laid foundations.

The list contains a chronological overview of important personalities who were born or raised in today's Nazareth. It is irrelevant whether the people later had their sphere of activity in Nazareth or not. Many moved away after their birth and became known elsewhere. The list does not claim to be complete.