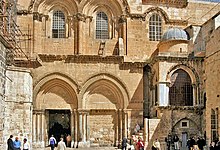 Main entrance to the Church of the Holy Sepulcher in Jerusalem

The Greek Orthodox Patriarchate of Jerusalem is an Orthodox autocephalous church based in Jerusalem and approximately 100,000 Christian believers, the majority of whom are Palestinian.

The patriarchate includes Greek Orthodox communities in Palestine and Israel as well as in Jordan , as well as the autonomous church of Mount Sinai with the Catherine's Monastery .

Patriarch Theophilos III has been its head since 2005 . from Jerusalem . The Viri Galilaei Church is the seat of the Patriarch .

The patriarchy uses the old Julian calendar . It did not take part in the 2016 Pan-Orthodox Council .

After the Israel Land Authority , the Greek Orthodox Church is the second largest landowner in Israel. Until the big land sales, she owned an area of ​​4.5 square kilometers, which is now one of the most valuable pieces of land in Israel, including in Jerusalem , Jaffa , Tiberias , Caesarea , Ramla , Nazareth and other places. The church bought the land in the 19th century for agricultural purposes.

After the establishment of the State of Israel in 1948, the land was often leased in 99-year contracts, e.g. B. to the Nature and Park Authority of Israel and the Jewish National Fund (JNF) . The contracts often include an option to renew. Many of these contracts were brokered in 1949 and 1950 by the rabbi and diplomat Ja'akov Herzog , who at that time was employed in the Israeli Ministry of Religious Affairs.

Even under the predecessor Irineos I of the current Patriarch Theophilos III. there had been a dispute over land sales. They led to the deposition of Irineos, who had sold land to Jewish settlers. Since 2011, the current Patriach has sold extensive land in dubious transfers to companies in Caribbean tax havens at a fraction of the market value. The real estate built on the sold land lost massively in value after the sales became known, as it was unclear whether - as is customary under current Israeli law - the houses will go to the owner after the end of the lease period or whether the contracts will be extended by the new owners. Some contracts expire in 50 years. Members of the community speak of theft. In the meantime, a large part of the land owned by the Greek Orthodox Church is said to have been sold, including to the investment company Kronti Limited based in the British Virgin Islands , which later sold the acquired properties to other companies in the Cayman Islands .