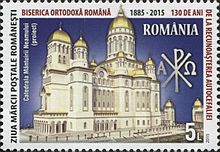 Postage stamp for the 130th anniversary of autocephaly of the Romanian Orthodox Church (2015) with the image of the Cathedral of the People's Redemption, which is under construction

The Romanian Orthodox Church - Patriarchate of Romania , Romanian Biserica Ortodoxă Română (BOR) , is numerically the second largest Orthodox autocephalous church in the world after the Russian Orthodox Church - Patriarchate Moscow . About 87 percent of the Romanian population belong to it. The Holy Synod has 42 bishops. Since the revolution in 1989 and the fall of Nicolae Ceaușescu , the church has experienced an upswing. There are now 15  theological faculties and over 500  monasteries with more than 8,000 monks and nuns .

Since 1949, the 300,000 Romanians living in other European countries have been represented by a metropolitan in Paris . There are now several foreign dioceses, such as a metropolis for France and the Mediterranean region and, since 1993, a Romanian Orthodox metropolis for Germany, Central and Northern Europe (Nuremberg).

The Romanian Orthodox Church reports to the Patriarch Daniel Ciobotea in Bucharest , who has been in office as the sixth Patriarch since 2007.

The first so-called metropolises on today's territory of Romania were formed at the beginning of the 15th century :

The first patriarch from 1925 was Miron Cristea, who in 1938 became Prime Minister for a year until his death during the establishment of the royal dictatorship of Charles II , thereby legitimizing the abolition of the constitutional state.

The church had offered itself to every ruler of the 20th century, says Oliver Jens Schmitt ; first to the king from 1938 to 1940, then to the army, and finally from 1944 to the communists. Under the Communists, the Orthodox Church appropriated the ecclesiastical property of the Uniate Church in Transylvania, which still today makes up a considerable part of the wealth of the Orthodox Church. At the same time the ties to the west - at the behest of Stalin - were broken off. The church became an instrument of power for the regime. In contrast to the Catholic and Protestant churches in Romania, the Romanian Orthodox Church remained loyal to the Ceausescu regime until its end; their patriarch Teoctist had made a declaration of loyalty to the regime in the last days of the dictatorship, therefore resigned and after 4 months was still to be found at the side of the post-communists. The church moved back to the center of political events. In the 2010s the “post-communist oligarch party” (Schmitt) PSD was closest to her. With its conservative orientation, the church stirs up anti-western and authoritarian resentments.

The Romanian Orthodox Church is one of the largest landowners in Romania and exercises great economic power with it and with its companies without paying taxes. 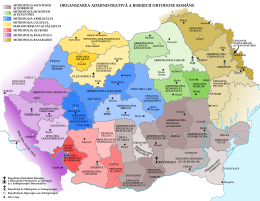 Romanian Orthodox eparchies in Romania, the Republic of Moldova, Hungary and Serbia