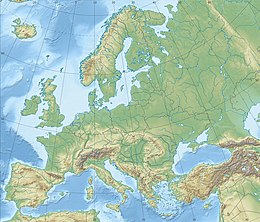 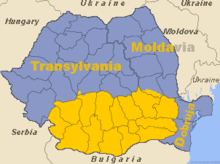 Regions of Romania. Wallachia in yellow

The Wallachia , Romanian outdated Valahia ; Țara Românească or Țara Rumânească ( German  for 'Romanian Land' ) is a historical landscape in the south of today's Romania .

The largest city in Wallachia is the Romanian capital, Bucharest .

Other uses of the term Wallachia

The Romanian-speaking areas of Greece were also called Wallachia, see Megalovlachia . The Moravian Wallachia ( Czech Valassko ) got its name from the late Middle Ages immigrant Vlachs , which were not fully assimilated.

In some regions of Germany and Austria, Wallachia is also used colloquially as an expression for a distant region or an abandoned, inhospitable area, literally as it is real (from a German or Austrian perspective): behind the Carpathian Mountains . In this sense, Wallachia is the unachieved destination of the journey in the also filmed novel Tschick by Wolfgang Herrndorf .

Walchwil , a municipality in the canton of Zug , is given the name Wallachia during the carnival there .