The old port of Caesarea 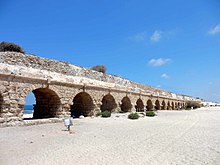 The aqueduct on Caesarea beach

Caesarea ( Hebrew קֵיסָרְיָה Qeisarjah ; Arabic قيسارية Qaysaria ; Greek  Καισάρεια ) is a city in Israel . It iscentrallylocated on the Mediterranean Sea between Tel Aviv and Haifa and north of the ancient city of Caesarea Maritima .

In the Persian epoch (586–332 BC) the Phoenicians built a place on one of the bays with a high water table , which was named Straton in a papyrus by the Egyptian Zenon of Kaunos from 259 BC. Is first mentioned. Straton was born in 103 BC. Conquered by the Hasmonean king Alexander Iannaeus and thus belonged to the kingdom of Judah .

Herod the Great had Caesarea between 22 and 10 BC. At the site of the town, which had become a small harbor settlement called Turris Stratonis (Straton's Tower), it was built in honor of the Roman Emperor Augustus, whose full name was Emperor Caesar Augustus . He furnished it luxuriously with a theater , a hippodrome , shopping streets , large baths and palace complexes.

After the conquest by Sultan Baibars in 1275, the city fell into disrepair and the place remained completely deserted for a long time.

The first Jewish settlement in the Caesarea area was Kibbutz Sdot Jam , which was founded in 1940.

After the establishment of the State of Israel in 1948, a modern city emerged. Many residents of the place with noble residential areas belong to the upper class of the population; For example, the former Israeli President Ezer Weizmann had a house here. There is a golf course near the modern city, which for a long time was the only one in Israel. The rebuilt ancient theater of Caesarea is now used for musical and theatrical performances against the backdrop of the Mediterranean.

Caesarea had about 4,500 inhabitants in 2007, the population increased to 5,127 by 2017. Caesarea is the only place in Israel that is managed by a private organization, the Caesarea Development Corporation .

The first scientific investigations began in 1873 by the Palestine Exploration Fund. The theater, the hippodrome, the aqueduct and the crusader city as well as columns, capitals and statues were found. The excavations were continued from 1959 by Italian and Israeli and from 1992 also by American archaeologists.