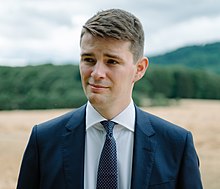 Marcus Faber (born February 4, 1984 in Stendal ) is a German political scientist and politician ( FDP ). He is the deputy state chairman of the FDP Saxony-Anhalt , district chairman of his party in the Stendal district and a member of the FDP federal executive committee . Since its constitution on October 24, 2017, Faber has been a member of the 19th German Bundestag .

Faber attended the Rudolf-Hildebrand-Gymnasium in Stendal, where he passed his Abitur in March 2003 . He then did his basic military service as a tank pioneer in the Elb-Havel barracks in Havelberg . From 2003 to 2008 he completed a degree in political science at the universities of Potsdam and Sydney , which he completed with a degree in political science . He then took up doctoral studies at the University of Potsdam, where he in 2013 with a thesis on " direct democracy at the country level " in Economic and Social Sciences to Dr. rer. pole. received his doctorate .

After completing his academic training, Faber worked as a research assistant in the German Bundestag in 2013 . From 2013 to 2014 he worked as a consultant for fundamental questions in the Brandenburg State Parliament . Since 2015 he has been employed by the Central Real Estate Committee as a consultant for trade, communal matters, hotel, logistics and citizen participation .

Faber is involved in various non-profit organizations on a voluntary basis . Among other things, he has been a member of the Presidium of the Ambassador Club Germany since 2013 . In October 2019 he was elected Vice President of the German-Israeli Society .