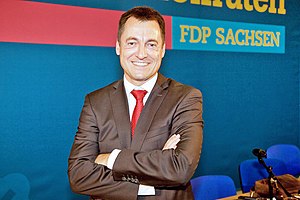 Torsten Herbst grew up in the Dresden district of Zschertnitz , attended the polytechnic high school "Gottfried Semper" and later the Dresden-Plauen grammar school . He did his community service in a hospital. He then began studying economics at the Dresden University of Technology and Economics , which he completed with a degree in “International Business Studies” . During his studies he also attended Liverpool John Moores University in 1995/96 .

After completing his studies, he worked as an editorial assistant at MDR and later in the press office of ADAC Saxony . From 1999 until he moved into the Bundestag he worked in the Dresden advertising and PR agency Zastrow + Zastrow. In this position he advised medium-sized companies in the areas of strategic marketing and public relations. Even during his time as a member of the state parliament, he continued to practice his profession to a limited extent.

Torsten Herbst is single and has no children.

From 2004 to 2014 he was a member of the Saxon State Parliament . He was elected via the state list of the FDP Saxony in the state elections in 2004 and 2009 , the failure of his party to pass the 5 percent hurdle in the state elections in 2014 prevented him from moving back in. Within the state parliament he was deputy chairman of the committee for economy, labor and transport as well as a member of the committee for rules of procedure and immunity matters. He also acted as parliamentary manager and treasurer of the FDP parliamentary group, for which he also took on the role of spokesman for economic, labor market and transport policy as well as media and European policy within parliament.

In the run-up to the 2017 federal election , he was nominated by the FDP Saxony as a top candidate and ran in the constituency of Bautzen I as a direct candidate for his party. He made it into the 19th German Bundestag . There he acts as FDP chairman in the committee for transport and digital infrastructure and as a deputy member of the budget committee .