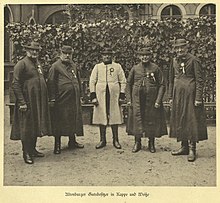 Under a landowner one understands the owner z. B. an agriculture , which can also be connected with other branches of business such as cheese dairy or mill .

In Saxony , for example, the term farm owner refers to the owners of the Hufner who owned the village until well into the 19th century as an old community , who, unlike cottagers, had the right to decide and, as stated in the village rügen , together with that of the landlord used village judge and originating from their ranks aldermen also perceived. The various municipal and town ordinances issued in the 19th century merely abolished the privileges of the old parishioners, but the farm owners kept their land.

From the ranks of the farm owners came in Saxony numerous members of the rural electoral districts of the Second Chamber of the Saxon Landtag , the assembly of estates of the Kingdom of Saxony , such as the landowner, community board , local judge and Landtag member Carl Gottlieb Barth (1819–1898). The same was true for winery owners such as Franz Carl Sickmann (1790–1860).