The Latin Quarter (German Latin Quarter ) is the traditional student district in Paris . Its name is derived from the fact that the students and scholars of the nearby Sorbonne spoke Latin there for a long time . 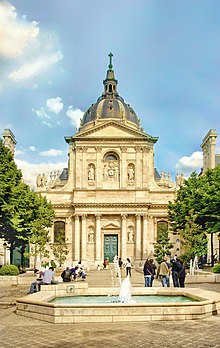 Palais du Luxembourg (seat of the Senate ) and its garden

The term Latin Quarter does not refer to a quarter in the strict sense of the division of the Parisian administrative structure (the area belongs mainly to the 5th arrondissement ), but an area with imprecise boundaries, largely on the slopes of the Montagne Sainte-Geneviève , in which the activities of Parisians are University as well as a number of other educational institutions. The Latin Quarter is one of the few places with remnants of the old town of Paris before it was redesigned by Georges-Eugène Haussmann in the 19th century.

Many writers have lived in the area or have written about it - Honoré de Balzac , Gabriel García Márquez and Klaus Mann are examples. In May 1968, the Latin Quarter was one of the scenes of student unrest . Today the quarter is characterized by tourism and gastronomy, but is still home to important academic institutions. Rents have risen, so students can hardly live there - if they do, then in the chambres de bonne , the former maids' rooms. Today, in addition to the Sorbonne ( Paris I , Paris IV ), the Latin Quarter is home to the École normal supérieure and Mines ParisTech . The most famous French high schools -  Henri IV and Louis le Grand  - are also located there. This is where the selection of the French elite begins with the so-called classes préparatoires , which prepare for the entrance exams for the elite universities ( Grandes écoles ) after graduating from high school .