Île aux Cygnes ( il o siɲ ; German  island of swans ) is the name of an artificial Seine island in the 15th arrondissement of Paris .

The 1.3 hectare Île aux Cygnes is not far from the Eiffel Tower and is 890 meters long and 20 meters wide. Three bridges span the island and are stored on it, for which the island was created. Pont de Bir-Hakeim at the northeast end, where the Seine is divided into two arms, consists of two levels and several sections. Its 114-meter-long section of the bridge crosses the wider arm of the Seine, the middle section sits on top of the dam, and a 90-meter-long section spans the narrower arm of the Seine. The lower level houses the pillars of a viaduct in the middle and the two road embankments lined with sidewalks on the sides. The Métro drives over the upper level . The metro line 6 operates lying at the bridge station on the south shore Bir-Hakeim , the line 10 the stop Javel - Andre Citroen . Half a kilometer further downstream is the Pont Rouelle railway bridge , which also consists of several different sections, such as a metal arch bridge without piers over the right arm, a stone arch on the island and a bridge with two supports in the left arm of the Seine. It serves the rail traffic of the northern branch of the line C of the RER and connects the station Champ de Mars - Tour Eiffel with the stop at Avenue du Président Kennedy. At the Pont de Grenelle at the southwest end of the island, the two arms of the Seine come together again at the foot of a statue of liberty. It is one of five statues of liberty in Paris.

On the car-free Île aux Cygnes, the eleven-meter-wide Allée des Cygnes, framed by 322 trees, runs in a north-east-south-west direction . It opens up the island, which was renovated between July and October 2012 and used as a recreation area.

The Île aux Cygnes was artificially built in the Seine from 1825. It emerged downstream (southwest) of a bend in which there was previously an island, which was initially called Île Maquerelle, then Île des Cygnes and which was merged with the left bank of the curve from 1786 . 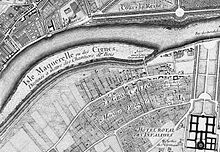 On September 16, 1672 , on behalf of Louis XIV, Finance Minister Jean Baptiste Colbert had the French ambassador in Copenhagen settle forty swans imported from Denmark, which found a new home in 1674 on an island at what is now Pont d'Iéna . This island, previously known as Île Maquerelle , served the farmers of Chaillot ("Chailiau") as pasture for their cattle since the 13th century. For their grazing rights ( French “fermage” ) they had to raise up to 20 livres in 1492 , the rent ( French “bail de l'herbe” ) rose to 27 livres in 1551. The island was only connected to the mainland after 1609 by the "Pont Rouge". After the swans came to the island due to an ordinance of October 16, 1676 and were supposed to beautify the Seine and Paris, it was given the name "Isle des Cignes" ( swan island ).

After the king's death, King Louis XV. the island on March 21, 1722 of the city of Paris, which it now used for wood storage and as a shipyard. The map drawn by Seigneur Roussel in 1731 still mentions the alternative names "Isle Maquerelle or des Cignes" and describes their future purpose of replacing the wood stores ( French "destinée a mettre des chantiers de bois" ). On the Plan de Turgot published in 1739, the "Isle des Cignes" is still recorded at its original location, the "Pont rouge" is now called "pont des cignes". A patent dated June 20, 1773 ordered the backfilling and connection of the island with the southern bank of the Seine, which happened between 1786 and 1812. From November 30, 1790, the brothers Jacques and Augustin Charles Périer operated motor-driven flour mills for a short time. When the Pont d'Iéna was built in 1812, the last part of the island was connected to the mainland. At the site of the former island is the quai Branly on the left bank street with the museum of the same name .

Île aux Cygnes on the left in the plan from 1937. The former Île des Cygnes forms the inner bank of the Seine bend above the center of the picture.

In the Seine, further to the south-west, the concessionaire of the Pont de Grenelle raised a new island below the bridge in 1825 as part of the bridge construction, rounded it off and fortified it with stone banks in 1827. It was given the name Île aux Cygnes from the disappeared island . The Grenelle Bridge, which opened on May 1, 1827 and spans the island, had to be replaced by a new bridge as early as 1874 due to its dilapidation. At the height of the island, the Seine is 200 meters wide, which is why today's Grenelle Bridge, at 220 meters, is the second longest bridge on the Seine after the Pont de Bir-Hakeim (228 meters) within Paris - which also runs over the island. In 1878 the iron bridge Passerelle de Passy was built, which connected the island with the Rive Gauche (south bank of the Seine) and was opened on the occasion of the Paris World Exhibition in May 1878. It was replaced by the Pont de Bir-Hakeim, completed between May 1903 and April 1906; it spans the island at a width of 23.50 meters.

The Parisian sculptor Auguste Bartholdi , built on the southwestern end of the island a replica of him in 1886 established in New York City Statue of Liberty on a scale of 1: 4 with a height of 22 meters (including 10.5 meters base), inaugurated by the July 4, 1889 the then French President Marie François Sadi Carnot . On inauguration day, France celebrated the centenary of the storm on the Bastille (July 14, 1789) and the United States celebrated Independence Day (July 4, 1776). The builder Bartholdi protested against the eastern orientation of the statue, so it was turned west in May 1937.