The thermal equation of state

The equation describes the state of the ideal gas in terms of the state variables pressure , volume , temperature and amount of substance or number of particles or mass . It can be represented in various forms that are equivalent to one another, whereby all these forms describe the state of the system under consideration in the same way and clearly. It was first formulated by Émile Clapeyron in 1834.

The equation represents the limiting case of all thermal equations of state for vanishing density , that is, for vanishing pressure at a sufficiently high temperature. In this case, the intrinsic volume of the gas molecules and the cohesion - the attractive force between the molecules - can be neglected. The equation is a good approximation for many gases such as air that is unsaturated with water vapor, even under normal conditions.

In 1873 Johannes Diderik van der Waals extended the gas law to the van der Waals equation , which, in contrast to the general gas equation, takes into account the intrinsic volume of the gas particles and the attraction between them and can therefore also be used as an approximation for clearly real gases . Another approximate solution for real gases is the series expansion of the virial equations , whereby the general gas equation is identical to a break in the series expansion after the first term. In general, the general gas equation is suitable as an approximate solution for weakly real gases with low intermolecular interactions, low pressures and high temperatures (large molar volumes). In particular, ideal gases here have no Joule-Thomson effect .

There are various special cases of the general gas law that establish a connection between two quantities while all other quantities are kept constant. These relationships between the state variables of a gas are explained and not only empirically derived through its particle character, i.e. through the kinetic gas theory .

The Boyle-Mariotte , and Boyle's law or Boyle's law and often with Boyle'sches law abbreviated, indicates that the pressure ideal gases at constant temperature ( isothermal change of state ) and a constant amount of material is inversely proportional to the volume . If you increase the pressure on a gas package, the volume is reduced by the increased pressure. If you reduce the pressure, it expands. This law was discovered independently by two physicists, the Irish Robert Boyle (1662) and the French Edme Mariotte (1676). 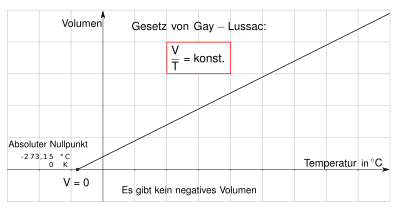 The absolute zero point can be guessed by the law of Gay-Lussac: The quotient of volume and temperature is always constant and a negative volume does not make physical sense.

The first law of Gay-Lussac , also Gay-Lussac's law , Charles's law or Charles's law , states that the volume of ideal gases at constant pressure ( isobaric change of state ) and constant amount of substance is directly proportional to temperature. A gas expands when it is heated and contracts when it is cooled. This connection was recognized by Jacques Charles in 1787 and by Joseph Louis Gay-Lussac in 1802 .

The actual law of Gay-Lussac (the above is just the part most commonly referred to as Charles's Law ) is:

Here the temperature is at the zero point of the Celsius scale, i.e. 273.15 K or 0 ° C. is the volume at and the volume expansion coefficient at , where the following generally applies to ideal gases . In contrast, the temperature for which the volume is sought.

The law of Amontons , often 2. Gay-Lussac , indicates that the pressure ideal gases at constant volume ( isochoric state change ) and a constant amount of fuel is directly proportional to temperature. When the gas is heated, the pressure increases and when the gas cools, it decreases. This connection was discovered by Guillaume Amontons .

At constant pressure and constant temperature, the volume is proportional to the amount of substance.

These laws apply to all homogeneous substances as long as temperature and pressure remain unchanged, and also to ideal gases.

The law of Avogadro states that two equal volumes of gas that are under the same pressure and the same temperature also contain the same number of particles. This is true even if the volumes contain different gases. The relationship for and applies . With certain exceptions, the number of particles in a gas packet can be determined if the volume, pressure and temperature are known, regardless of the type of substance.

The Law of Avogadro was discovered by Amedeo Avogadro in 1811 .

It can also be formulated like this: The molar volume is identical for all ideal gases at a certain temperature and at a certain pressure. Measurements have shown that one mole of an ideal gas at 0 ° C = 273.15 K and 1013.25 hPa pressure takes up a volume of around 22.4 dm³.

An important consequence of the law is: The gas constant is identical for all ideal gases.

Derivation from the kinetic gas theory

The kinetic gas theory says that gases are composed of many individual atoms or molecules , each of which has a mass and a velocity . The mean kinetic energy of all particles is proportional to the temperature of the gas. It applies

where is the mean square of the velocity of the particles. You can see that the molecules move at higher speeds at a higher temperature of the gas. Not all particles have the same speed, but a statistical distribution of the speeds occurs ( Maxwell-Boltzmann distribution ).

If the gas is enclosed in a container with the volume , gas molecules repeatedly hit the wall of the container and are reflected. As a result, the particles transmit a certain momentum to the wall per unit of time and per wall surface . With the particle collisions, a force acts on every part of the wall, which we understand as the gas pressure .

This pressure is greater, the faster the particles are. On the one hand, at high particle velocities, the rate at which the gas molecules hit the wall increases, as they cross the container space more quickly. On the other hand, the impacts against the wall become more violent and the impulse transmitted increases. If the particle density is increased, the probability that the molecules will hit the wall increases. From such considerations one can derive this equation for the pressure:

If the mean kinetic energy of the gas particles is expressed by the temperature, the thermal equation of state of ideal gases results:

However, this equation only applies to gases with a low particle density and at a sufficiently high temperature. This derivation neglects the fact that attractive forces act between the particles, which weaken the particle pressure against the wall. In addition, the molecules themselves have a volume and the gas cannot be compressed at will because the particles displace each other. The description of such a real gas copes with the Van der Waals equation .

Derivation from the special cases

The combination of the laws of Amontons and Gay-Lussac

The laws of Amontons and Gay-Lussac, both of which were found before the gas equation, can be summarized, for example, by the thought experiment of a two-stage change of state , whereby one generally assumes a constant amount of substance.

First, consider an isochoric change in state according to Amonton's law . The starting point here is state 1 with and . The end point is state 2 with and .

This is followed by an isobaric change of state according to Gay-Lussac's law from state 2 to state 3 with and .

Actual derivation of the gas equation

If you multiply the equation by , you get:

The fraction on the left-hand side of the equation is a constant quantity ; this is called the universal gas constant

(also for molar gas constant ) and it is calculated as follows:

If you delete the indices, you get the general gas equation you are looking for:

Derivation from the thermal equation of state

The basis for the derivation is the thermal equation of state :

The individual symbols stand for the following quantities:

The following applies in particular to an ideal gas:

This simplifies the thermal equation of state to the following form:

You can now integrate the equation of state from a state  1 to a state  2 ( definite integral ) and thus get:

If two of the state variables are the same, i.e. if they have not changed from state 1 to state 2, they can be shortened and the respective special cases are obtained. The universal gas constant must be determined experimentally and is not derived from the integration constant . An example of an experimental setup can be found in the article " Gas constant ".