The title of this article is ambiguous. For the constant in the black body radiation law, see Stefan-Boltzmann constant .

The Boltzmann constant has the dimension energy / temperature .

This value applies exactly because the unit of measurement " Kelvin " has been defined since 2019 by assigning this value to the Boltzmann constant. Previously, the Kelvin was defined differently and was a variable to be determined experimentally.

, but the value is still exact.

The universal gas constant is calculated from the Boltzmann constant :

where with the unit of measurement 1 / mol is the Avogadro constant .

Definition and connection with entropy 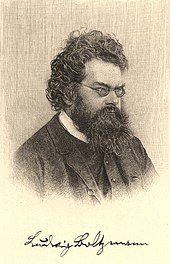 This means that the entropy of a macrostate of a closed system in thermal equilibrium is proportional to the natural logarithm of the number ( result space ) of the corresponding possible microstates (or, in other words, to the degree of “disorder” of the macrostate). The statistical weight is a measure of the probability of a certain microstate.

This equation links - using the Boltzmann constant as a proportionality factor - the micro-states of the closed system with the macroscopic size of the entropy and forms the central basis of statistical physics . It is engraved in a slightly different nomenclature on Ludwig Boltzmann's tombstone at Vienna's Central Cemetery .

The change in entropy is defined in classical thermodynamics as

with the amount of heat .

An increase in entropy corresponds to a transition to a new macrostate with a larger number of possible microstates. This is always the case in a closed (isolated) system ( Second Law of Thermodynamics ).

In relation to the microscopic partition function , entropy can also be defined as the quantity of the dimension number :

In this “natural” form, the entropy corresponds to the definition of entropy in information theory and forms a central measure there. The term represents the energy needed to raise the entropy by one nit .

and occurs, for example, in the gas law for ideal gases as one of the possible proportionality constants:

Meaning of the symbols:

Based on normal conditions (temperature and pressure ) and using the Loschmidt constant , the gas equation can be reformulated to:

Relationship with the kinetic energy

In general, for the mean kinetic energy of a classical point-shaped particle in thermal equilibrium with degrees of freedom , which are included in the Hamilton function as a square ( equipartition theorem ):

For example, a point particle has three degrees of translational freedom:

Has a diatomic molecule

In addition, at sufficiently high temperatures, the atoms vibrate against each other along the bonds . In the case of individual substances, chemistry also contributes to the heat capacity: For example, water has an extremely high heat capacity because hydrogen bonds are broken when the temperature rises and energy is expended, and when the temperature falls, they are formed with the release of energy.

More generally, the Boltzmann constant occurs in the thermal probability density of any system of statistical mechanics in thermal equilibrium. This is:

At room temperature ( T  = 293 K) the value of the temperature voltage is approximately 25 mV.