Before the Rutherford scattering experiment (1909) by Hans Geiger , Ernest Marsden and Ernest Rutherford , it was known that atoms contain negatively charged electrons and the same amount of positive charge . An attempt to explain the structure of atoms was the Thomsonian model of the atom. According to this, the atom consists of evenly distributed positive charges and electrons that move within it. The Rutherford scattering experiment showed that the positive charge and a large part of the mass are combined in a small atomic nucleus and thus refuted this atomic model. 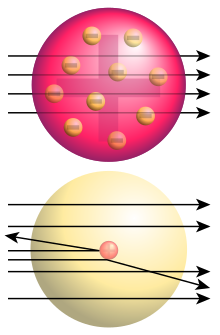 Below the result of the Rutherford experiment, above the result to be expected if Thomson's atomic model had applied.

In a refined experimental setup, the distribution of the deflection angles (between 0 ° and 180 °) in a vacuum with thin foils of different metals, including gold, was investigated. Here, too, it was found that around one in 8000 alpha particles was thrown back, which indicated a small, massive center inside the atoms. Rutherford called this massive center inside the atom the atomic nucleus.

"It was almost as incredible as if you fired a 15-inch shell at a piece of tissue paper and it came back and hit you."

"It was almost as incredible as if you shoot a piece of tissue paper with a 15-inch bullet and the bullet comes back and hits you."

Using the scattering formula named after him , Rutherford derived values ​​for the size and charge of the positive charge distribution of gold and other elements from the experiments. He came to the conclusion that the enormous electric field strength required for the measured strong deflection of alpha particles can only be explained under the assumption that the positive charge of the atom is completely concentrated in a compact atomic nucleus whose radius is around is about a factor of 3000 smaller than the atomic radius.

To explain the electrical neutrality of atoms Rutherford assumed that the nucleus is surrounded by electrons, and the total number of electrons per atom exactly the atomic number corresponds. However, no information could be derived from the experiments about the spatial distribution of the electrons, since the electrons, due to their low mass, do not contribute to the deflection of the alpha rays to any detectable extent. Contrary to often developed to place images in textbooks and other secondary sources Rutherford not have a model of the electronic structure of atoms, he quoted only in February 1911 at a lecture to the Manchester Literary and Philosophical Society , based on an in May in the Philosophical Magazine published article was Nagaoka “ Planetary model ” to check the plausibility of his estimate of the atomic number of gold.

One problem lies in the explanation of emissions and absorptions of energy quanta : The Rutherford model cannot explain the so-called spectral lines of various gases. It was therefore replaced by Bohr's atomic model, which assigns different energy levels to the electrons .

Another problem, which could not be solved by Bohr's atomic model, is that the model does not provide an explanation for why the electrons do not crash into the nucleus, although Maxwell's revolving and thus accelerated charge is constantly emitting energy. Furthermore, an electron falling slowly into the nucleus could emit photons with any frequency, but this is impossible due to the quantized energy levels .