The title of this article is ambiguous. For the rose plant of the same name, Alchemilla Vulgaris, see lady's mantle .

The pigeon leaf ( Drosophyllum lusitanicum ), a carnivorous plant , is the only species of the pigeon leaf family (Drosophyllaceae). It is found almost exclusively on the Iberian Peninsula .

The pigeon leaf is a perennial subshrub with a not or only weakly branched, woody trunk, which usually reaches a total height of forty centimeters, but rarely up to 1.60 meters. The plants can live up to eight years.

The root system is extremely well developed for a carnivorous plant, it consists of a strong taproot with many fine side roots. The main purpose of this root system is to develop deep water reserves in times of severe drought.

The drosophyllum has numerous, about 30 centimeters long, linealische, grooved on the leaf surface sheets that serve the plant as traps. The leaf buds are unusually curled outwards rather than inwards. As young leaves they point upwards and only point more and more horizontally with increasing age. As soon as they have reached this position, they gradually die off, while new leaves are continuously formed at the upper end of the stem axis . The dead foliage does not fall off, however, but remains on the plant and hangs down in a bushy shape against the direction of the stem axis. It is highly UV-reflective and thus attracts prey, but it may also serve to suppress competing vegetation.

The leaves of the pigeon leaf are sticky traps that are covered with two different types of glands on the leaf margins. The red-colored catching glands with multicellular stalks secrete a sticky secretion in which the insects get caught. The mostly colorless, but occasionally also red, digestive glands sit directly on the leaf surface and secrete the digestive secretions. There are 5 to 10 times as many digestive glands as there are stalked paw tentacles. The secretion production is unusually intense, therefore and because the secretion has a lower viscosity than that of other carnivores , the secretion occasionally drips down from the leaves. The digestive enzymes are esterases , phosphatases , proteases , peroxidase and leucine amino peptidase . Unlike most carnivores with sticky traps, the traps of the pigeon leaf are passive, i.e. immobile. Even so, the plant is an extremely effective insect trap. The strongly honey-like scent of the secretion serves to attract the insects. 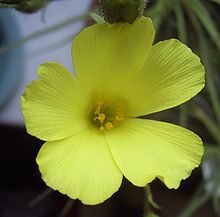 Blossom of the pigeon leaf

The leaves contain large amounts of plumbagin , which is likely to protect the plant from fungi and bacteria through its microbicidal effect.

The four to fifteen five-fold flowers bloom from February to June / July. They stand in an umbelliferous cluster and have a diameter of 2.5 to 4 centimeters, the flower stalks , the linear stipules (which become shorter and shorter towards the apex) and the sepals that are fused together at the base are densely haired with tentacles. The five free petals are lemon yellow, the androeceum consists of ten to twenty stamens arranged in two circles with thread-like stamens (filaments), the gynoeceum has five free, thread-like styles . The pigeon leaf is self-pollinating, with shaggy bees ( Panurgus ), hoverflies and beetles as pollinators .

The flowers only open for a few hours. After pollination, a translucent capsule fruit ripens over a month , this opens along its length and releases five to ten inverted egg-shaped, lacquer black seeds with a diameter of up to 2.5 millimeters. The seeds remain viable for several years.

The pigeon leaf is native to up to 800 m above sea level on the western coasts of Portugal and Spain ( Andalusia ), but its distribution area extends into northern Morocco (around Tangier ). On the Iberian Peninsula there are also isolated locations remote from the coast.

Plant at the natural site

It grows preferentially on weakly acidic or neutral, in summer extremely dry rock, gravel and sandy soils in full sun, also as a pioneer plant in eroded locations. Coastal fog is presumably used to cover the water requirement in dry seasons. Short and superficial fires do little damage to the plants and at the same time ensure that the surrounding vegetation is opened up in favor of the plants, but heavy and longer fires kill them. Appropriate for its locations, it is very heat-resistant (it can withstand temperatures of up to 45 ° C without damage), but also partially hardy.

Often it is found together with cork oaks , holm oaks , juniper , heather and pine trees , in the latter case, then with rock roses ( Cistus ) and gorse ( Ulex ). Other types of plants with which the pigeon leaf is associated include lavender , daisies , sedges , fescue and finials .

The species is increasingly threatened, the occurrence continues to decline, currently 80% of all historically known stocks are considered destroyed. The most important influences are settlement pressure and infrastructure measures (e.g. road construction), afforestation that displaces the weakly competitive plants, and especially in Morocco, but also Andalusia, the use of the sites as grazing areas for cattle. The Andalusian sites are considered to be the most intact, as this is where human influence is least.

The genus is monotypical , that is, it contains only one species . Since the family does not contain any other genera, it is also monogeneric .

The closest relatives of the species are the non-carnivorous Ancistrocladaceae (except for the hook leaf ) and the hook leaf family (Dioncophyllaceae), and somewhat more distant the pitcher family (Nepenthaceae).

The plant was first described in 1661 in Gabriel Grisley's Viridarium Lusitanum as "chamaeleontioides". JP Tournefort listed them in 1689 in his Portuguese flora as "ros solis lusitanicus maximus". Linné introduced the plant in 1753 as Drosera lusitanica to the sundew species. In 1806 Heinrich Friedrich Link separated it as a separate genus, but it remained assigned to the sundew family . Since the research of Chrtek et al. In 1989, however, it has been placed in its own family, the pigeon family (Drosophyllaceae).

The botanical name Drosophyllum comes from the Greek - from “drosos” for “dew” and “phyllon” for “leaf”, hence the German name “Taublatt”. The name lusitanicum is derived from a Celtic tribal name and was adopted by the Romans as the name for the province of Lusitania , which included large parts of today's Portugal .

The magazine "Das Taublatt" published by the Society for Carnivorous Plants is named after the German trivial name .