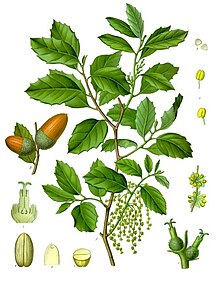 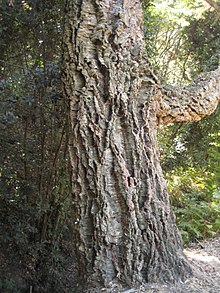 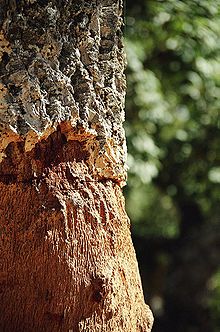 The cork oak ( Quercus suber L. ) is an evergreen deciduous tree of the western Mediterranean from the genus of oaks ( Quercus ). It endures drought and makes little demands on the soil quality. It is not hardy in Central Europe . It is named after the thick cork layers of the trunk, which are used for cork extraction. A single tree can provide 100 to 200 kilograms of cork in its lifetime . Cork oak forests are home to a multitude of animal and plant species. Since cork is increasingly being displaced by other materials as a bottle cap, these forests are at risk as part of the cultural landscape and animal species such as the Iberian lynx are threatened with extinction.

The cork oak grows as an evergreen tree that reaches an average height of 10 to 20 meters or, in rare cases, up to 25 meters and a trunk diameter ( BHD ) of 50 to 90 centimeters. It forms a dense and asymmetrical crown that starts at a height of two to three meters and spreads widely in free-standing trees. The crown can be divided into several separate, rounded partial crowns.

The young twigs are densely hairy light gray or whitish. Older branches are strong and knotty. Older trees only form short shoots with lengths between 7 and 15 centimeters.

The thick, longitudinally cracked cork layers of the gray-brown trunk bark are characteristic of the cork oak . The cambium of the smooth bark of young trees forms a layer of cork very early on, which can be three to five centimeters thick. The light and spongy cork fabric shows vertical cracks and is white on the outside and red to red-brown on the inside. After the cork has been harvested, the trunk appears reddish brown, but later it is significantly darker. The wood is ring-pored, has a brown heartwood and a light reddish sapwood . The cork oak develops a tap root that reaches a depth of one to two meters, and from which several meters long, horizontally running side roots extend. The trees are over 400 years old and harvested specimens are 150 to 200 years old.

The leathery leaves are alternate and are 3 to 5 inches long and 1.5 to 4 inches wide. The shape varies between round, oval and lanceolate-oval. The leaf blade has five to seven sharp teeth on both edges and a pointed vegetation cone (apex). The midrib stands out clearly on the underside of the leaf, the first-order lateral nerves usually lead to the teeth of the leaf margin. The upper side of the leaf is light green, the underside of the leaf whitish and densely hairy. There is no hair on young trees. The leaf stalks are 6 to 18 millimeters long and are also hairy. At the base of the petiole are two narrow, lanceolate, five millimeters long and bright red stipules that fall off in the first year. The new leaves appear in April and May, when older leaves are also shed. They usually stay on the tree for two to three years, less often only one year, the latter especially in severe environmental conditions and on the northern border of the distribution area. Extremely cold winters can also lead to complete defoliation.

The cork oak is single sexed ( monoecious ), there are both female and male flowers on one specimen. The female flowers form upright inflorescences in the leaf axils of young branches. These are formed from a hairy axis 5 to 30 millimeters long with two to five separate flowers. The female flowers contain a small, hairy, four- to six-lobed flower envelope and three to four styles . The male catkins also arise on the leaf axils of young branches. They are bright red at the beginning and stand upright, older kittens are yellow and pendulous, four to seven centimeters long and have a whitish hairy axis. The single flowers are sessile and have a densely hairy flower cover that is colored red when opened. The four to six stamens are whitish with yellow, egg-shaped anthers. They are longer than the bracts.

The fruit clusters are 0.5 to 4 inches long and carry two to eight acorns. Half of the fruits are enclosed in the fruit cup (cupula), the fruit cups are 2 to 2.5 centimeters in diameter. The upper scales of the cupula are gray and hairy, in the subspecies Quercus suber occidentalis the scales are close together or are fused. The size of the acorns varies between lengths of 2 to 4.5 centimeters and diameters of 1 to 1.8 centimeters. The fruit casing ( pericarp ) is bare, smooth and shiny brownish red. The hilum (the starting point of the seed) is convex and has a diameter of six to eight millimeters.

The distribution area of ​​the cork oak is the area around the western Mediterranean basin. In Portugal, natural and cultivated stands cover an area of ​​750,000 hectares. There are natural populations of the nominate form at altitudes between 150 and 300 meters above sea level, the subspecies occidentalis can be found along the Atlantic coast. In Spain the occurrences mostly remain below 600 meters, but rarely reach heights of 1200 meters. Cork oaks are rare in central Spain. In Italy you can find natural occurrences along the Tyrrhenian Sea and in eastern Puglia on the Adriatic Sea . Also on the Adriatic there is the cork oak on the Dalmatian coast. It is one of the most common forest trees in Sardinia . Natural and man-made occurrences exist in Africa on the Mediterranean coast of Tunisia , Algeria and Morocco and at altitudes up to 1000 meters, on the High Atlas up to 2000 meters. Outside of its natural range, the cork oak is cultivated in the Crimea , in the Caucasus , in India and in the southwest of the USA. The subspecies Quercus suber occidentalis also thrives in mild areas of England .

The species needs very little light and cannot survive in dense populations. It loves warmth, grows at annual mean temperatures of 13 to 17 ° C and can withstand maximum temperatures of up to 40 ° C. In the area of ​​distribution, the temperature rarely falls below freezing point, but temperatures down to −5 ° C without damage and down to −10 ° C without major damage can be tolerated. The cork oak is not hardy in Central Europe . It endures drought and survives dry periods in summer by reducing its metabolism. An annual rainfall of 500 to 700 millimeters is considered optimal, in cooler locations 400 to 450 millimeters can be sufficient with sufficient humidity. Cork oaks have low soil demands and also grow in poor, dry or rocky locations. They rarely thrive on calcareous soils, but they are often found on crystalline slates , on gneiss , granite and sands . The acidity of the soil should be between pH 4.5 and 7.

The cork oak is considered a pyrophyte because it recovers quickly after forest fires because it is protected by the cork.

The Iberian lynx , a resident of the cork forests of Spain 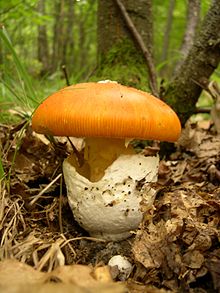 The Kaiserling, a symbiotic partner of the cork oak

The cork oak goes with several types of fungi a mycorrhiza - symbiotic one. The fine root system of the oak is in close contact with the mycelium of the fungus. The oak receives water and nutrient salts from the fungus in exchange for products of photosynthesis . Such a symbiosis exists among others with the following species:

Several species of butterflies damage the cork oak, the most important being the gypsy moth ( Lymantria dispar ). The species lays its eggs in the bark of the branches and trunks, and the caterpillars that hatch in spring are distributed in the crown and eat them bare. The bacterial species Bacillus thuringiensis is used as a biological pesticide against the gypsy moth . Another pest is the oak moth ( Tortrix viridana ), whose caterpillars eat flowers and young leaves and roll them up with thread to form typical coils. Damage to the leaves also directed the Ringelspinner ( Malacosoma neustria ) to which attaches its eggs in multi-row rings on the bark thinner branches, and also the brown-tail ( Euproctis chrysorrhoea ), the crawler skeletonizing the leaves and further damage the tree after wintering in the spring . A special cork pest is the jewel beetle Coraebus undatus , which lays its eggs in the cork tissue. Another harmful species of beetle is the billy oak ( Cerambyx cerdo ), whose larvae eat long corridors in the oak wood.

Unfavorable climatic conditions and fungal attack are made responsible for the weakening of trees and for crown damage. Such fungal parasites of weakness are Diploida mutila , Hypoxylon mediterraneum , Endothiella gyrosa and representatives of the mold genus Fusarium . Drought and parasite infestation are also considered to be the cause of the weakness syndrome in parts of Spain and Portugal.

Quercus suber is a species of the Cerris section , which also includes, for example, the following species:

The hairless pericarp and the mostly two-year ripening time of the fruits are characteristic of the section . The cork oak is an exception, because the fruits can ripen in both the first and the second year.

In the species Quercus suber two subspecies are distinguished:

The scientific name Quercus suber is derived from the Latin word quercus , which the Romans used to describe the pedunculate oak ( Quercus robur ). The specific epithet suber means in Latin cork oak and also cork. 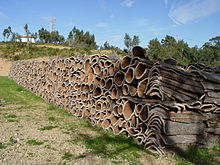 Storage of the bark

The cork oak is grown for the production of cork in several Mediterranean countries . The centers of cork production are in southern Portugal and southern Spain, where low trees with large crowns and strong branches are grown in large areas, which provide the highest yield of cork. These mostly extensively managed habitats are called Dehesas in Spain and Montados in Portugal . They are considered to be extremely valuable from the point of view of biodiversity and cultural heritage.

The cork consists of dead, air-filled, thin-walled cells and contains cellulose and suberine . Cork is heat and sound insulating, the suberine gives it water-repellent properties. The cork layer is replicated by the cork-producing Phellogen and can therefore be harvested repeatedly without damaging the tree too much. The first harvest takes place after about 12 to 15 years with a trunk diameter of 20 to 30 centimeters ( BHD ). The first cork layer is called “male cork”, is still not very elastic and cracked and is only used for insulating mats. Only the following cork harvests deliver a higher quality cork, the "female cork", which can be used commercially in full. The best quality cork is obtained from the second, third and fourth harvest. Cork harvesting takes place every nine to twelve years when a layer thickness of 2.7 to 4 centimeters is reached. Under favorable (warm) conditions, the harvest can take place every eight years, in North Africa every seven years. A cork oak can be harvested five to ten times in total. In order to keep the damage to the trunk surface small, harvesting can also be carried out every three years, whereby only a third of the usable surface is removed. An important maintenance measure is pruning , which begins around the age of ten and reaches a height of up to three meters. An oak provides around 100 to 200 kilograms of cork over its lifespan, and one hectare around 200 to 500 kilograms per year.

The cork is mainly used for the production of stoppers and corks , as well as for heat and sound insulation and for other technical applications (including composite materials , shoe soles, floor coverings). Bottle cork production accounts for around 70% of the added value in cork cultivation. As natural corks are increasingly being replaced by plastic or sheet metal closures, there could be a significant decline in the cork oak population in south-western Europe, which endangers the biodiversity in these areas.

The bark, which contains around twelve percent extractable tannin, is also used. In addition, the acorns are used as feed in extensive pig fattening ( acorn fattening ). One tree can provide 15 to 30 kilograms of acorns per year.

Cork oak as a symbol