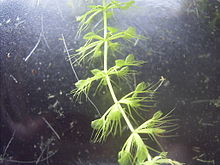 The sundew plants (Droseraceae) are a family of the flowering plants (Magnoliopsida).

The family is represented worldwide with the three genera water trap , Venus fly trap (both monotypical ) and sundew , which together contain around 200 species .

All species in this family are herbaceous , carnivorous plants . The inflorescences are mostly wraps . The radial flowers are hermaphroditic and mostly five-fold, sometimes four-fold. The ovaries are on top. There are fruit capsules made with very many small seeds.

The water trap and the Venus flytrap catch their prey with a folding trap (similar to a leghold trap), in the genus sundew there are only sticky traps.

Earlier it was assigned the genus Taublatt ( Drosophyllum ); meanwhile this is placed in a separate family, the pigeon family (Drosophyllaceae).