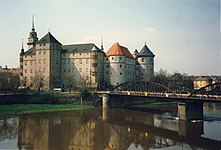 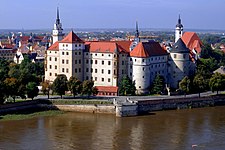 Hartenfels Castle, Elbe, customs house
on the left with the old Elbe bridge , on the right with the bridge viewing platform

Hartenfels Castle on a painting by Lucas Cranach the Elder J., 1544

Hartenfels Castle is a magnificent renaissance castle in the city of Torgau in the Free State of Saxony . 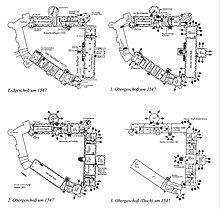 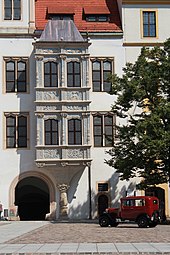 Bay window in the inner courtyard, gate passage towards the Elbe 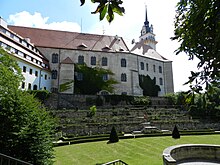 When the Saxon ruling dynasty of the Wettins split up into two lines when Leipzig was divided in 1485 , the previous main residence, the Albrechtsburg Castle in Meißen, fell into the possession of the Albertine Wettin line. Elector Friedrich III. and his successors later had Hartenfels Castle in Torgau expanded into the new main residence of the Ernestine line . The construction of the palace was started in the 15th century by Konrad Pflüger , a pupil of Arnold von Westphalia and continued by Konrad Krebs in the 16th century . It is the largest fully preserved early Renaissance castle in Germany and one of the main works of the Saxon Renaissance .

On the courtyard side of the so-called Johann Friedrich wing or east wing is the representatively designed Wendelstein , an almost 20 meter high cantilevered stone spiral staircase . According to Dehio , this courtyard side is one of the architectural “main achievements of the early Renaissance in Germany” from 1533 to 1535. The Wendelstein (parapets and pilasters) is made from Elbe sandstone by sculptors from Dresden . The constructive model for this architectural reinterpretation was the Wendelstein at the late Gothic Albrechtsburg in Meißen.

The chapel or castle church of Schloss Hartenfels was built by Nikolaus Gromann in 1543–1544 . It is considered the first new Protestant church in the world. The castle chapel was inaugurated by Martin Luther himself in 1544 . Until then and for a long time afterwards, existing churches were rededicated depending on the denomination. Dehio points out, however, that her spatial concept is not determined by the theological concepts of the Protestant church service, but by the spatial concept of the palace. Already emerged in the region at the end of the 15th century like (pre-Reformation) Castle churches on Castle Wolmirstedt or Ziesar Castle . The church is integrated into a three-story hall in the north wing. The double galleries rest on flat arches between the side buttresses. The pulpit is on the south side of the hall. The altar from 1602 is a Dresden sculptural work from the Walthers circle and comes from the former castle church in the Moritzbau of the Residenzschloss , which was converted into living space in 1737. The furnishings include a memorial plaque from 1545, which shows Martin Luther between the princes Johann Wilhelm and Johann Friedrich . She goes in the draft on Augsburger models of the early Renaissance and back of the Dresden founders was I. Wolfgang and Oswald II. Hilliger from the famous bell and Geschützgiesserdynastie the Hilliger cast. 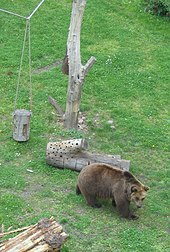 Reconstruction of the original condition of the courtyard facade of the hall building around 1547, according to Hoppe 1996

After the Schmalkaldic War , the castle came into the possession of the Albertines in 1547, when the Ernestines, who were ultimately defeated in the conflict, had to cede important estates together with the electoral dignity. When the Albertines permanently moved their court seat to Dresden in the 16th century , the palace was mainly used as an administrative building. In 1815 it came to the Kingdom of Prussia and now served the Prussian administration of the newly formed Torgau district .

As part of the Saxon Memorials Foundation, a documentation and information center was created here to commemorate the victims of political tyranny. It deals with the role of Torgau as the seat of the Reich Court Martial and the associated local Wehrmacht prisons during the Second World War.

Hartenfels Castle served as the backdrop for the DEFA fairytale film Sleeping Beauty in 1970 .

There is an old tradition of keeping bears in the moat. A bear was caught for this as early as 1425. The feudal custom was interrupted after the Battle of Torgau in 1760 and resumed in the 1950s.

Organ in the castle chapel 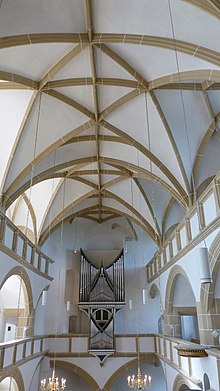 The organ in the castle chapel was built in 1994 by the organ builder Martin Vier (Friesenheim). The slider chest instrument is arranged in the Renaissance style and tuned in the middle. It has 25 registers , including 4 registers on alternate loops (WS) and two prints on three manuals and pedal. The playing and stop actions are mechanical. 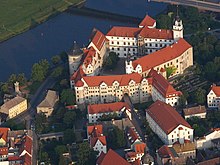 Hartenfels Castle from the north-west 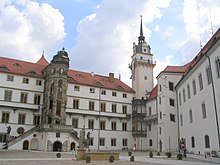 Wendelstein and Hausmannsturm in the inner courtyard

Regular exhibitions of the Dresden State Art Collections in wing D in cooperation with the district of North Saxony and the large district town of Torgau:

The Torgau Documentation and Information Center is showing the permanent exhibition Traces of Injustice on Torgau's role as the headquarters of the Wehrmacht penal system under National Socialism, the history of the Soviet special camps No. 8 and No. 10 and the GDR prison system in Torgau.