Werningshausen is located in the Thuringian Basin on the Gramme , a tributary of the Unstrut . In the south of the village, the narrow Gera flows into the Gramme.

Although not located on this river, the Unstrut cycle path - between Haßleben and Wundersleben - leads through Werningshausen.

The area around Werningshausen is rich in archaeological finds since the Neolithic. The second part of the name "... hausen" indicates a Franconian town foundation. The first documentary mention of the place comes from the period from 750 to 802: At that time a Hadamar transferred a property in "Weremgereshusen" to the Fulda monastery . In 1255 the counts of equals became feudal lords of the village. There were also other gentlemen later. In 1483, instead of the previous chapel, a church was built on the same site. The high church tower with many arched windows was also called "Thuringian Virgin". In 1485 the Duchy of Saxony received feudal sovereignty over Werningshausen. In 1529 the Reformation was introduced in the village, the first Lutheran pastor was called Johann Bach. The village's first boys' school was established around this time. In 1559 an escort stone was set at the Gramme ford, over which the Magdeburg trade route ran. It is still preserved and shows the coat of arms of Electoral Saxony and that of the city of Weißensee on its north side. In 1620 a school for "maidservants" was founded. The last Gleichen-Graf died in 1631, and the Counts of Hohenlohe took his place in the upper Grafschaft Gleichen . During the Thirty Years War in 1636 Werningshausen was the headquarters in the Swedish siege ring around Erfurt. In 1637 it was sacked by imperial troops, followed by famine and typhus. The economy was completely down. In 1683 a plague epidemic caused 220 deaths among the 600 inhabitants. In 1687 the old church was demolished and a new one was built while the tower was being preserved.

In 1725 48 houses were burned and the perpetrators were executed. In 1750 a new rectory was built (the one that still exists today). In 1773 a major fire destroyed almost the entire village, and the church and tower also burned down. The nave (today's) was rebuilt from 1773–1776 in a modest Rococo style, the tower - the "Thuringian Virgin" - initially remained inoperative. The reconstruction of the place took place in a relaxed construction method, with wide streets, a large central square in place of the former village center, tiled roofs and a suburb. Werningshausen was supported by the neighboring communities and the Prince of Hohenlohe in the reconstruction. In 1774 the Gramme was straightened and a flood ditch was dug. In 1806, French soldiers looted the place, which then suffered heavily from contributions for years. From November 1813 to March 1814, during the siege of the French-occupied Erfurt by Prussians and Russians, the hospital fever raged, from which 20 Werningshäuser died. From about 1820 to 1874 peat cutting was practiced near Werningshausen. In 1833, with the approval of the Gotha government, the residents were able to elect a local authority for the first time. In 1838 the first pharmacy was set up in town. Doctors had been around since the 18th century. In 1841 the burnt out old church tower was torn down, in 1842 the community built a new one (the current one). During the revolution of 1848/49 in Germany there was a mobile guard in Werningshausen under a black, red and gold flag. In the early 1850s, 23 families emigrated to North America. In 1853 a "Werningshausen Liedertafel" was founded. In 1859 the community had 950 inhabitants. The Erfurt-Nordhausen railway line, built in 1868, could be reached by the Werningshäuser via Ringleben or Straussfurt. In 1871 a warrior and military association was formed. In 1875 Werningshausen organized a big song festival with 14 other choral societies and the regimental band of the "71" from Erfurt. In 1883 the post office and telegraph office were set up.

From 1909 there were electric street lights, fed from the "Gispershausen electricity center". A new school building was inaugurated in 1910. In 1918, the community had to bury 29 flu deaths as part of the global epidemic.

In 1922 Werningshausen, which was an exclave of the Duchy of Saxony-Gotha until 1920 , became part of the Weimar district. In 1923 a memorial was inaugurated on Wilhelmsplatz in honor of those who died in World War II. In 1925 the place had 853 inhabitants. In 1927 the bus connection to Erfurt went into operation. After a fire, a new main building for the Cux mill was built in 1933. In 1934 the Gramme bed was regulated, and in 1934 extensive repairs were carried out on the school, parish, church and church tower. In the further course of the 1930s there were more intense clashes between the church and Nazi organizations, including more frequent church resignations. In March 1945 trenches and holes were dug on Wilhelmsplatz and the pottery market. Field work suffered from low-flying activities. Forced laborers from Poland were also used in Werningshausen during the war. The last Wehrmacht unit left the place in March. On April 10, 1945 in the evening, US artillery took Werningshausen under fire. The church tower and the big bell were hit, church windows shattered, some stables and barns burned. The Americans stayed in the "White Horse" with one office until they were replaced by the Red Army in early July.

The population doubled after the end of the war due to the influx of displaced persons, in 1948 there were 1,318 inhabitants. There were expropriations, such as the "tavern" and land of the neighboring manors Vehra and Wundersleben . At the end of 1945 the agricultural cooperatives were allowed to resume their activities. A deposit had to be paid by every farm with more than one hectare of land. In 1946/47 a period of drought was followed by floods. 1948 is also described as the "year of famine". In 1950 Werningshausen was assigned to the district of Erfurt, and in 1952 to the district of Sömmerda. The year 1951 brought again floods and a Colorado potato beetle plague ("Ami beetle"). The construction of the Unstrut retention basin in Straussfurt began in 1952, and the irrigation from this reservoir brought about a significant increase in agricultural yields from the 1960s. In 1958 the LPG "Vorwärts" and "Einigkeit" became, in 1960 the LPG "Progress" was formed with the inclusion of the last farmers under special pressure. They were later combined to form LPG Type III with the name “Unity”. In the 1970s, animal and plant production were separated as part of the industrialization of agriculture. In 1967 the last pastor left Werningshausen; for years there were only representations. Soon the church and rectory made a "miserable and abandoned impression". Many historical documents were also lost.

In 1973 - with Franz Schwarz - three members of a Brethren congregation settled in the rectory and began renovating the church and rectory, which were "closer to demolition than reconstruction". In 1974 the Wigberti Church could be consecrated again. In the 1980s, Soviet soldiers from locations in the region also illegally came to visit churches and monasteries.

In 1972 the construction of the sewer system began, in 1975 that of a new water pipe. In the course of the construction of the Henschleben cattle fattening facility, stalls for 1200 calves were built at the eastern end of the village. In 1976 the village square was redesigned with green spaces and the community tavern was renovated. It was named “Best Village Club in the Sömmerda District”. In the mid-1980s, Werningshausen had 790 inhabitants. In 1987, the Priorat Brethren was built, and from 1989 the St. Wigberti Monastery was re-established.

In May 1990, a mayor and a council could be freely elected again for the first time as part of the turnaround . From 1991 the water supply and roads were modernized, gas supply and telephone connections were installed. In 1992 the first phase of construction of the monastery was inaugurated. In 1993 Werningshausen came to the Straussfurt administrative community. In 1996 Wilhelmsplatz was redesigned, in 1999 the construction of new buildings on the terrace began, in 2000 the renovation of the Cux mill, the LPG stables were demolished. In 2001 the second construction phase of the monastery was inaugurated. In 2002 Werningshausen celebrated its 1200th anniversary, in 2013 the Werningshausen Monastery celebrated its 40th anniversary.

From 1990 - as everywhere in the new federal states - there was a drastic decline in births and an increase in the number of young people leaving.

The municipal council from Werningshausen is made up of 8 councilors.

The honorary mayor Hannelore Rost was elected on June 26, 2004. 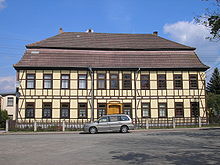 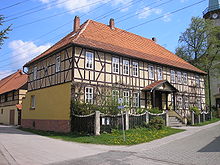 The place is known beyond the region for the " Priorat Sankt Wigberti ". This is a licensed Lutheran monastery with Benedictine orientation. Evangelical Lutheran and Roman Catholic pray and work here. Monks according to the Rule of St. Benedict .

The historic rectory from 1750, which was included in the monastery area, was close to decay when it was rebuilt by the monks from 1973 onwards. In 1984 the construction of the Marienkapelle in the churchyard was completed. The other buildings were constructed between 1989 and 2001.

The St. Wigbert monastery church is also the village church of Werningshausen. The nave dates from 1773–1776, the steeple from 1841. There were three earlier churches at this point. After damage from artillery fire in April 1945 and neglect in 1973, the church was "closer to demolition than reconstruction" and, like the church in Vehra , was supposed to be the neighboring village. After the reconstruction by the brothers and the village community took only nine months, the church was consecrated again in 1974. The bell, which was completed in 2001 and now consists of six parts, is considered "the most beautiful bell in Thuringia". Since 1974 the church has been renovated and embellished several times, most recently in 2007. The organ with 23 registers from 2004 comes from Speith-Orgelbau .

The St. Wigberti monastery is a magnet for many visitors.

The monastery brothers not only did a great job for the church and rectory of Werningshausen themselves, but - especially during the GDR era - restored over 30 churches in the region, some of them saved.

The Cux mill is an earlier watermill - with still existing technical equipment - in the south of the village. The main building is from 1933, the other buildings - with the exception of an extension from the GDR era - are much older and built in a half-timbered style. Shortly before it flows into the Gramme, the Cux-Mühle is powered by the Schmalen Gera and now feeds electricity into the grid.

To the south of the place there is a still preserved meadow landscape of Gramme and Schmaler Gera, while to the south-east there is the elongated vineyard with cherry trees.

Cities and communities in the district of Sömmerda