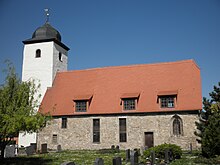 Großmölsen is located on the Gramme about ten kilometers northeast of Erfurt in the southeastern part of the Thuringian Basin .

The place was first mentioned in 775 by Charlemagne and was able to celebrate its 1225th anniversary in 2000.

The Gramme crossing of the Via Regia was probably the reason for the construction of the castle, which was located on the northwestern edge of the village. The name “Hofgarten” has been preserved here. In 775 the castle was mentioned as Molinhuso's royal possession . It was later owned by the von Gruneberg family. At the end of the 19th century there were still traces of a moat. At the same time there was a gate with a round arch on the east side of the village. The church is dedicated to St. Boniface , which indicates a very old age.

From Grossenmulhusen was large Mulhouse and then Großmölsen . The place belonged to the Wettin office of Buttelstedt until 1489 . At the beginning of the 17th century, Großmölsen with Schwansee , Großrudestedt and Kleinrudestedt belonged to the "Vogtei Schwansee", which was part of the Großrudestedt district from 1664 . Since 1672 the place belonged to the Duchy of Saxony-Eisenach and from 1741 to Saxony-Weimar-Eisenach . In 1816, Großmölsen was incorporated into the newly established Vieselbach office, which was opened in 1850 in the Weimar administrative district of the Grand Duchy of Saxony-Weimar-Eisenach.

During the Second World War, 34 people from Poland and Yugoslavia had to do forced labor in Großmölsen .

The church and some neighboring objects were listed as an ensemble in 1998.

The local council from Großmölsen consists of six councilors.

The honorary mayor Tobias Ballin was re-elected on March 19, 2017.

To the east of the town run high-voltage lines and the new railway line Erfurt – Leipzig / Halle .

Cities and communities in the district of Sömmerda