Steinbach-Hallenberg is a town in the Schmalkalden-Meiningen district in Thuringia . The city has around 9,000 inhabitants.

The city is located in the Haseltal on the southwest slope of the Thuringian Forest (about 4 km south of the Rennsteig ) at an altitude of about 420 to 470 m. The city's commercial areas are mainly located in Herges-Hallenberg.

The city is made up of the following districts:

Detail from a map of the Schmalkalden Office, Joist Moers , 1589

The beginnings of Steinbach-Hallenberg are closely linked to the history of the current Hallenburg ruins . The settlement of the Steinbach-Hallenberger Grund (Haseltal) probably took place since the 12th century. On October 24, 1303, the then sovereign of Schmalkalden Margravine, Anna von Brandenburg, separated the St. Marie chapel in Steinbach from the Schmalkalden mother church. Today's Steinbach-Hallenberg is mentioned for the first time in this document. However, older documented certificates are available from the Hallenburg. This is how Reginhard von Hallenberg is called in 1228. It can be assumed that there was already a settlement under the Hallenburg this year. It is also worth mentioning that the castle is said to have been one of the castles destroyed by Emperor Otto IV in 1212. The dynastic petty rule of the Lords of Haldenberg could even go back to the beginning of the 12th century, as the borderline of the Reinhardsbrunn monastery documents from 1111 allows conclusions to be drawn about a dominion around the Hallenburg.

On July 18, 1595, the municipality of Steinbach unter Hallenberg was granted the right to drink and brew, in June 1669 the market rights and on June 30, 1936 the city rights.

The town of Steinbach-Hallenberg originally developed from two independent settlements. The map "Warhaffter demolition of the Schmalkalden rule" from 1589 shows Undern Steinbach and Obern Steinbach . Obersteinbach was formed by the settlements at Schlossberg and at the "Burg" (today's Moosburgstrasse). Untersteinbach, on the other hand, developed out of a settlement that existed along the river in the Erbstal. From the 16th century to 1822, both settlements belonged to the Hallenberg office (from 1619 to the Hessian rule Schmalkalden ), from which the double name Steinbach-Hallenberg later emerged.

During the Second World War , around 90 men and women from France , the Ukraine and the Netherlands had to do forced labor : in smaller metalworking companies, with baker Arthur Fuchs , with innkeeper Rudolf Waitz , in the Kurt Wilhelm company . At least three women with child died in the living conditions and were in the cemetery in Eichelsbach of Schmalkalden buried.

The community of Herges-Hallenberg was incorporated in 1978.

Development of the population of Steinbach-Hallenberg

The local elections on May 25, 2014 with a turnout of 50.3% led to the following distribution of the 20 seats in the city council: 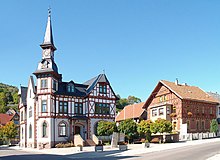 Blazon : Divided by blue over red; above, between two green fir trees, a silver castle ruin on a silver rock; Golden hammer and golden blacksmith's tongs crossed diagonally below.

City partnerships exist with the Hessian towns of Steinbach (Taunus) near Frankfurt am Main and Lohra in the Marburg-Biedenkopf district and the North Rhine-Westphalian community of Wilnsdorf .

The Hallenburg castle ruins, enthroned on an 80 m high porphyry rock as a symbol of the city , are probably one of the most outstanding historical buildings in the city. The late Romanesque castle on the Arnsberg with the 20 m high keep and remains of the core castle was first mentioned in a deed of donation from 1268 as castum Haldenberc .

There is also an early baroque church in Steinbach-Hallenberg, which was built in 1652 and 1698 . The three galleries are decorated with pictures of the biblical story. Also worth mentioning is the pulpit, the work of an unknown Nuremberg master. It was donated to the church by the mayor Hans Happ from Unterschönau in 1658. Also worth seeing is the stone entrance gate of the cemetery from 1605. The upper right keystone contains the names of the village masters (headmasters) and twelve (community representatives) of Steinbach-Hallenberg as well as the mayor of the Hallenberg office. The cemetery chapel was built in 1739.

The “Glockenhaus” local history museum is located on the Schlossberg, a half-timbered house with a substructure from the Middle Ages. It was originally a farm building in the castle district. The museum specialty of the Haselgrund , the metal handicraft museum, arose from the tradition of metal handicrafts . Here and in the small workshops belonging to it, you can watch how nails and the local specialty - corkscrews - were handcrafted. There is still an old, true to original corkscrew workshop on the site of the handicraft museum. The entire building was pulled from its original location on low transporters in 2004 and repositioned there. Every September, on the day of the open monument , the forge festival with demonstrations takes place here.

In addition to many half-timbered houses from the 18th and 19th centuries, the town hall, built in 1900, is also worth mentioning.

The inrun towers and the landing slope of the ski jumping facility in Kanzlersgrund are located in the Steinbach-Hallenberg district.

On yet to district belonging Ruppberg an Outbound castle , Schloss Burg Ruprecht , suspected.

The metalworking industry traditionally predominates in Steinbach-Hallenberg. Today you can find a mix of metal, plastic and wood processing, electrical engineering, cardboard box production, construction and handicraft businesses as well as sales facilities from all areas of retail. The three industrial areas Im Erlich , Am Schertzer and Am Stiller Berg have a total developed area of ​​35.8 hectares. Steinbach-Hallenberg is a state-approved resort .

In Steinbach-Hallenberg there are two day-care centers, a primary school ( environmental school in Europe ) and a regular school. Both schools were rebuilt away from the center on the Hergeser meadows . There is also a three-field multi-purpose hall with a bowling alley. There is a library opposite the town hall. There is also a post office, an evangelical elderly care center, an ambulance station (DRK KV Schmalkalden eV) and a home for assisted living. Several doctors (general practitioners, ophthalmologists, gynecologists, dentists) and physiotherapists practice in Steinbach-Hallenberg. There are two pharmacies.

Steinbach-Hallenberg has a train station on the Zella-Mehlis-Wernshausen railway line , from Monday to Friday the South Thuringia Railway runs every hour, and on weekends every two hours.

Steinbach-Hallenberg can be reached via the motorway 71 via the Suhl / Zella-Mehlis or Oberhof junctions.

Districts of the city of Steinbach-Hallenberg