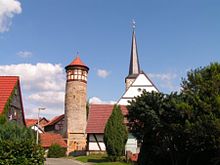 Vachdorf is a municipality in the district of Schmalkalden-Meiningen in the Franconian south of Thuringia . It belongs to the administrative association Dolmar-Salzbrücke .

Vachdorf is located on both banks of the Werra, southeast of Meiningen, on the B 89 (approx. 5 km) from the Meiningen Süd junction of the A 71 in the direction of Hildburghausen .

The place was first mentioned in 840 as Fachkedorp in a document from Emperor Ludwig the Pious . Exhibited at Ketzicha, today's Bad Kissingen , it is kept in the British Library in London. The Förderverein Kirchenburg Vachdorf e. V. has been trying to restore the fortified church since 1998 . Vachdorf was originally a fortified Carolingian royal estate. The fortified facility is located in today's village in the middle of the Werra lowland. In 1230 a Konrad von Vachdorf was named as a servant of the Bishop of Würzburg . In 1435 the Bishop of Würzburg pledged the places Vachdorf and Leutersdorf to the Counts of Henneberg -Schleusingen. The pledge was not redeemed until 1495. In 1542 Vachdorf came to the Counts of Henneberg-Schleusingen as part of the Meiningen exclave in Würzburg . After their extinction, Vachdorf and the Meiningen office came to the Wettins in 1583 . The hat tower of the fortification is still in its original state.

Vachdorf was persecuted by witches from 1619 to 1665: 16 people, 14 women and two men, got into witch trials . Eleven women were executed; the outcome of four trials is unknown. The last victim in 1665 was Margaretha, Hans Bauer's wife.

The local council from Vachdorf is composed of 7 councilors.

The honorary mayor Andreas Baumann has been in office since 2016.

The Trinity Church was built in the 1660s. The hat tower of the Vachdorf church castle is the last of the presumably four inner corner towers. The tower, which burned down in 1918, was called the Hutzelturm for 88 years because of the missing hat, until it was rebuilt in 2006. With a height of 18.70 m, it is the landmark of Vachdorf.

Above the village, near the road to Marisfeld, there is a refuge on the Krayenberg built by the local history association. From there you can enjoy a view of Vachdorf and the middle Werra valley through the steep rock drop.

Vachdorf on the website of the administrative association. Retrieved September 25, 2017 .