Roßdorf (historically Roßdorf vd Rhön ) is a municipality in the district of Schmalkalden-Meiningen in Thuringia . The fulfilling municipality for Roßdorf is the municipality Breitungen / Werra .

Roßdorf lies on the edge of the Thuringian Rhön between Wiesenthal and Rosa in the valley of the Rosabach, surrounded by the peaks of the Vorderrhön . In the north bordering the Place Stoffel dome (a mountain of volcanic origin, 620 m) with its characteristic rock on the top and the Pless , 644 m of the Pleßturm views over the expanse of the Rhon to the peaks of the Thuringian Forest allows . The Stoffelskuppe is surrounded by an ancient ring wall. The remnants of a building from the Middle Ages attached to the basalt rock remain on the summit . It could have been a chapel that followed a previous cult site.

The Roßdorfer Kutte , an approx. 10 m deep sinkhole lake , is not far from the village exit in the north-west, not far from the local road to Bernshausen . Also in a north-westerly direction one arrives over the long (popularly known as "bald" because of its sparse forest) Rain to the mountain Horn, 575 m, the two peaks of which are completely wooded.

To the west of the village is the Nebelberg , 524 m, where the Battle of the Nebel between Prussia and Bavaria took place in 1866 . A plaque placed near the Friedrichshof homestead commemorates the event.

South of Roßdorf are the Seegrube, a lake that is regularly filled with water only in spring, and the Roßhof, a former farm whose residential building has now been completely renovated and serves as a hiking restaurant with a view of Roßdorf and the mountains Stoffelskuppe and Pleß. About 1.5 km away is the Roßberg - at 702 m, the highest mountain in the area around Roßdorf.

The place was first mentioned in the year 781 in a deed of donation from the Fulda monastery . It can be assumed that at this time there was already a permanent manor in "villa Rosthorphe in pago Tolliveldum" (village of Roßdorf in the Tullifeld district ). The “Roßdorfer Mark” ranged from Wiesenthal to Eckardts and from Urnshausen to Georgenzell , including Rosa, Bernshausen and some desert areas.

In 1240 Marshal Konrad von Roßdorf testified that there was a castle in the village. The marshal was in the service of Count von Henneberg . In 1274 the castle was mentioned as owned by the Counts of Henneberg, but the location was not discussed. In 1317, Count Berthold VII von Henneberg-Schleusingen left the court at Helmershausen to Abbot Heinrich von Fulda against the court at Roßdorf, which was previously subject to the Fulda Provincial Court in Dermbach .

Count Johann I von Henneberg-Schleusingen († 1359), who received the place after the division of the estate with his sister-in-law Jutta von Brandenburg after the death of his brother Heinrich VIII. In 1347, relocated it along with Kaltennordheim and Barchfeld in 1350 to the Fulda monastery . The partial redemption only happened by Count Wilhelm II von Henneberg-Schleusingen († 1426) in 1419.

Since then, the property was shared by the Hennebergers and the Wettins . In the same year Reinhard von Eschwege zu Au in Hesse was enfeoffed with the Henneberg half of the castle and village of Roßdorf. In 1458 a "truce" was concluded between the von Eschwege family and the Henneberg bailiff Heinz von Wechmar, who established a permanent peaceful neighborhood with a simultaneous permanent " inheritance ", i.e. H. included common local rule.

In 1525 the peasants of Roßdorf also rose up during the Peasants' War and drove out the two Ganerbe, but after the suppression of the uprising they were immediately taken over by their liege lord Wilhelm VI. von Henneberg were reinstated. Shortly afterwards, the Ganerbe introduced the Reformation without the permission of the Henneberger . With this the ecclesiastical sovereignty fell to the Counts of Henneberg. After their extinction (1583), there were repeated violent disputes between the rulership of the House of Saxony and the noble heirs due to church affairs, with the Saxon government also having to intervene by force of arms. In 1594 Roßdorf received the low level of jurisdiction.

Roßdorf was persecuted by witches from 1611 to 1658: two women and one man got into witch trials . Käthe, Michael Walter's wife, was executed in 1611, a woman was released in 1658 and a man was expelled from the country.

Initially, both noble families lived on the castrum. Later the castle estate Roßdorf was divided, so that after 1600 two verifiable manor houses existed in the place, a house of the gentlemen of Wechmar and a house of the gentlemen Geyso (successors of those of Eschwege). In 1710 the Ganerbe von Wechmar and von Geyso received all secular and spiritual sovereign rights (patronage rights) for 4,000 Reichstaler. Associated with this was the development of Roßdorf into a market town. In 1803 the imperial knighthood was dissolved. The market town of Roßdorf thus fell back to the Duchy of Saxony-Meiningen , Amt Sand . The special rights of the imperial knighthood, to which the ganerbe belonged since 1577, were abolished.

In 1881 the von Geyso sold their estate to the industrialist Wenzel von Alexisbad, who in 1896 sold it to the Prussian Minister for Trade and Industry, Dr. phil. et jur. hc Hans Hermann von Berlepsch sold. The Frankish line of the von Wechmars died out at the end of the last century. In 1895 the Wechmar'sche Schloss was torn down after a fire. The Geyso Castle is now owned by a Dutch family who have extensively restored it. There is a campsite run by the castle owners in the castle garden.

The community belonged to the Vorderrhön administrative community from 1992 to 1996 , to which the community Rosa also belonged. With the dissolution of this Breitungen / Werra became the fulfilling municipality for Roßdorf.

The local council from Roßdorf consists of eight councilors. 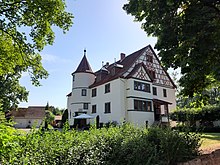