The title of this article is ambiguous. Further meanings are listed under Auma (disambiguation) .

Auma was a town in the Thuringian district of Greiz . On 1 December 2011 it was part of the rural community city Auma-Weidatal .

Auma is located in the Thuringian Slate Mountains on the Auma River . Down the river near Weida , the Aumatalsperre was built in 1936 for energy generation, service water supply and, today, also for recreational activities. Auma is about 20 km southwest of Gera . The highest elevation in the vicinity is the Lerchenberg at 447.5 m.

Auma probably goes back to a Slavic settlement in the 8th / 9th centuries. Century back. In Auma, the old Regensburger Strasse crossed the river of the same name. This transition was also interesting for the routes from Neustadt an der Orla towards Vogtland and Bohemia. This transition was secured and controlled with a castle - demonstrably from the 13th century. In 1248 an Albert von Auma was mentioned. The castle belonged to the Counts of Arnshaugk . It was later inherited by the Thuringian Landgrave , which was confirmed in 1328. There are no visible remains of the castle. Material from the outbuildings was used for buildings.

Auma was mentioned in a document on Sept. 24, 1237, as a city for the first time in 1331. The Reussians of Plauen were then enfeoffed with rule. 1485 took over the Albertine line of the Wettin castle and place, then the Ernestines were responsible.

In 1641 the peasant general Georg Kresse was shot in Auma. In 1790, the largest known fire in the city's history destroyed around 200 buildings. On the way to Jena and Auerstedt in 1806 Napoleon stayed in the city. Between 1816 and 1920 the city belonged to the Grand Duchy of Saxony-Weimar-Eisenach . In 1894 Auma was connected to the Triptis – Ziegenrück railway line .

During the Second World War , 70 prisoners of war and women and men from the Soviet Union who had guarded accommodation in the rifle halls had to do forced labor in the village since 1941 . They are remembered by a memorial in the city park.

In the spring of 1945, Auma was initially occupied by US troops before the city came to the Soviet occupation zone and in 1952 was assigned to the Zeulenroda district in the GDR.

On July 1, 1950, the previously independent communities of Gütterlitz and Untendorf were incorporated.

The last Auma city council has been composed as follows since the local elections in 2009 :

The last mayor was the CDU politician Gernot Purkart. 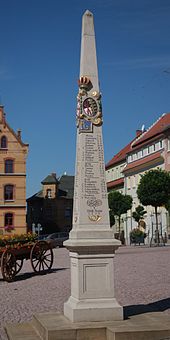 Particularly noteworthy is the quite large market with the replica of a Kursächsische post mile column (original parts from 1722 and the first reconstruction in the courtyard), old town hall (rebuilt in 1790), new town hall (1907/08), the Franz Kolbe school (1900) and the town houses. In preparation for the celebrations for the 675th anniversary of Auma in 2006, the market square was extensively redesigned. The Liebfrauenkirche southwest of the market was rebuilt after the city fire of 1790.

Auma is very easy to reach by car thanks to its convenient location on federal highway 2 and close to the A 9 motorway exit in Triptis . The Triptis – Marxgrün railway line has been closed.

Local public transport is served by PRG Greiz and RVG Gera with 3 lines. Line 40 runs every hour between Triptis and Zeulenroda and on to Greiz and Reichenbach .

The economy is characterized by medium-sized industry, craft and trade.

In Auma and Neudietendorf , the first two Thuringian direct dialing systems for telephone traffic (initially only local network) were put into operation.

Districts of the rural community of Auma-Weidatal