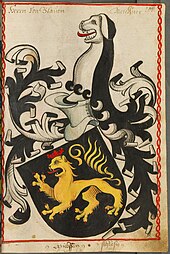 The bailiffs of Plauen were a noble family named after their seat in Plauen in the Vogtland . Like the governors of Gera , they were a branched line from the governors of Weida . A later branch of the Plauen bailiffs were the Burgraves of Meissen and the Reussians of Greiz . The latter ruled as the House of Reuss until 1918 in two German federal principalities. The Vogtland is named after the entire clan of the bailiffs.

Relatives of the Counts of Everstein (or Eberstein), who came from the Weser Uplands , founded the Dobnagau around Plauen as locators from around 1100 . Their first castle seat was on the Dobenaufelsen in the Syratal , then they built a city castle on the southwest corner of the Plauen wall ring, the remnant of which is today's Malzhaus . The Ebersteiners enfeoffed Heinrich II "the rich" († around 1209) from the dynasty of the bailiffs of Weida with Plauen. In 1236 Plauen appears for the first time in a document in the possession of the "Vögte von Plauen". Heinrich's grandson, Heinrich I. von Plauen , built the Plauen Castle as his seat. On May 25, 1278, the previous sovereign, Count Konrad von Everstein from Lower Saxony, came to Plauen personally and assigned the city to his brother-in-law, Vogt Heinrich I. Plauen and the Gau Dobena. Heinrich obviously remained in a loose feudal association with the Count of Everstein. His older son Heinrich II "the Bohemian" founded the line of the bailiffs of Plauen, the younger, Heinrich Ruthenus , "the Russian", founded the younger line, the later Princely House of Reuss .

Until the middle of the 13th century, the heads of the entire bailiff's family acted uniformly and expanded their terra advocatorum (the territory of the bailiffs). In the 14th century, however, they fell victim to the expansive efforts of their neighbors, the Margraves of Meißen and the kings of Bohemia: The Vogtlinien concluded, in part, mutually targeting alliances with the two neighbors, so the House of Plauen came under Bohemian feudal rule in 1327 while the governors of Weida and those of Gera joined the Wettins. In the Vogtland War of 1354–57, the bailiffs of Weida, Gera and Plauen lost most of their property to Emperor Charles IV and the Wettins .

Differentiation of the bailiffs and lords of Plauen from the Reussians

The two sons of Heinrich I , the first bailiff of Plauen, who were named after their wives, are considered to be the founders and namesake of new lines. Heinrich II. , The older son, called "the Bohemian" († documented until April 23, 1302), was the founder of the older Plauen line, from which the later castle-counts line of Plauen emerged.

Heinrich Ruthenus , or Heinrich the Russian , († before December 12, 1295) founded the younger line. First his son called himself Heinrich II. Reuss. With him, Reuss became a family name in 1307. The future Princely House of Reuss emerged from this line .
The namesake of both lines died before their father Heinrich I. von Plauen.

The older line died out with the death of Henry VI. von Plauen on January 22nd, 1572. His property fell to the Russians.

The bailiffs of Weida, Plauen, Gera and Greiz as well as the Reussians 1

In 1348 the country was divided into the houses of Mühltroff (older line) and Plauen (younger line).

With the extinction of the older line of bailiffs von Plauen in 1572, the dynasty of the Burgraves of Meissen ended. After the Plauen had never reigned as burgraves, the title was now also passed to the Electors of Saxony.

On December 15, 1294, in the field camp at Borna, Count Palatine Rudolf near Rhine and Duke of Bavaria issued the bailiffs Heinrich the Elder and Heinrich the Younger of Plauen, as well as the bailiffs of Weida and Gera, a formal letter of coat of arms, in which he says that the ancestors of the bailiffs Shield and banner from his, the Duke's ancestors. The Palatine lion can be traced back to 1230 and has been crowned since around 1240. The first coat of arms seal of the bailiffs of Weida is from approx. 1240–44, all earlier seals are gems. The award of the coat of arms and banners should therefore fall during this time. The actual origin of the lion is likely to have from the Counts of Everstein, who had the same coat of arms (also the same crest), only in other tinctures (silver-blue): The rule of Plauen belonged to Count Everstein in 1122, Plauen appears for the first time in 1236 Property of the Weida bailiffs. One line was then called Vögte von Plauen, with Plauen as an Eversteinian fief. It is therefore not excluded that the Everstein coat of arms (the Reussen) received the palatine tinctures, perhaps around 1261, when the bailiffs of Weida, Gera and Plauen had concluded a war alliance with the father of the Count Palatine Rudolf. Only in 1370 did the crest of the Gera line change to the Brackenhaupt, which it possibly owes to the Zollern family, who bought the right to this crest in 1317 (the silver-black tincture would speak for it). Around the middle of the 15th century, the Brackenhaupt was also taken over by the Reuss and Plauen lines. The family coat of arms then showed a red crowned and armored golden lion in black. On the helmet with black and silver covers a bracken trunk split by silver and black . This coat of arms is the same for all lines that are derived from the bailiffs of Weida:

As burgraves, the Lords of Plauen carried on the Meinheringer coat of arms, a black St. Andrew's cross on a golden background. On the helmet a golden square umbrella board, on it the cross, which is decorated with 5 peacock feathers at the corners. The ceilings are gold and black.