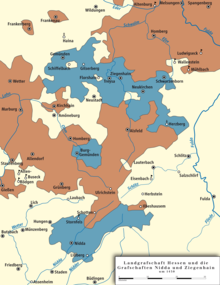 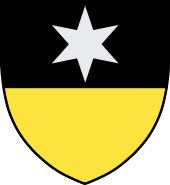 Coat of arms of the Counts of Ziegenhain

The Counts of Ziegenhain were descendants of the Counts Gozmar , attested as early as the 9th century, and their branch of the Counts of Reichenbach, founded in the 11th century . In the 12th century they built up a closed territory between Burgwald and Knüll , which almost completely separated Lower Hesse from Upper Hesse on the basis of a monastery bailiwick over the Fulda monastery and from Allod property , Reichsgut and Mainzer , Fulda and Hersfelder fiefs . Only a small area around Staufenberg Castle near Gießen remained an exclave in the middle of the Landgrave of Thuringia and later Hessian area.

They called themselves from 1144 after the castle Ziegenhain built by Gottfried I. , in today's district Ziegenhain of the city Schwalmstadt , Counts of Cigenhagen . Occasionally from 1144 to 1220 they also called themselves Counts of Wegebach , a settlement first mentioned in 1144 and named in 1308 "villa" about one kilometer north of Ziegenhain, in which Gottfried I initially resided and which became deserted around the end of the 15th century has been.

The county suffered considerable loss of territory as a result of the marriage in 1185 of Lukardis, daughter of Count Gozmar III. von Ziegenhain with Friedrich , the son of the Ludowinger Landgrave Ludwig II of Thuringia. This marriage brought the Ludowingers inheritance claims to Reichenbach, Wildungen , Keseberg Castle, Staufenberg Castle as well as Ziegenhain and Treysa . Gozmar's brother and successor Rudolf II fought vehemently against these claims, but his grandchildren and successors Gottfried IV and Berthold I had to negotiate a contract in Marburg in 1233 with Landgrave Konrad von Thuringia , who was then regent of the Ludowinger House in Hesse do without Reichenbach, Wildungen, Hollende Castle and the southwestern half of the Keseberg Bailiwick.

On the other hand, Count Ludwig I inherited the county of Nidda on the northern edge of the Wetterau in 1205 , as he had married the sister of the last Count of Nidda , Berthold II. , Who had died without a male heir.

In 1263 Count Ludwig von Ziegenhain renounced his rights to Hornberg Castle in the Neckar Valley in favor of the Bishop of Speyer . In 1279 the majority of the bailiwick was lost to the monastery itself via the Fulda monastery and in 1294 the Neustadt office east of Marburg was lost to the Archdiocese of Mainz .

1331 Count Johann of citizens from participating on the part I. Fulda at an elevation against the abbot of the monastery of Fulda. Since the abbot was victorious in the dispute, Johann I had to pay a heavy fine. In 1344 he finally renounced all remaining rights from the Bailiwick over the monastery for a transfer fee of 7100 pounds Heller , which became legally effective in 1346. However, the Counts of Ziegenhain retained the hereditary office of the Fulda marshal , whose duties included the jurisdiction over the Fulda knighthood , the presidency of state parliaments and the command of the feudal nobility and ministerials .

Relationship to the Landgraviate of Hesse

The geographical location of their county between the two most important parts of the Landgraviate of Hesse - Upper Hesse around Marburg and the Vogelsberg and Lower Hesse in the Kassel , Homberg and Rotenburg area - positioned the Counts of Ziegenhain in a situation of competition and conflict with the Landgraviate, which had a considerable interest in it had to connect their two largest parts of the country via the Ziegenhain area. The Counts of Ziegenhain were therefore often involved in armed conflicts with Hesse. The climax of the hostilities was the Ziegenhain membership and the leading role of Count Gottfried VIII. In the Sternerbund (1370-1381), a coalition of counts, lords and abbeys directed against the Landgraves of Hesse, which, however, was ultimately defeated by Landgrave Hermann II of Hesse .

The permanent threat from the Landgraviate of Hesse suggested a coalition with the Landgraviate's strongest opponent, the Archdiocese of Mainz , with which Hesse was in conflict from the 13th to the 15th century because of mutual hegemony efforts in North and Central Hesse. After the decisive victories of Landgrave Ludwig I in the Mainz-Hessian War over the Mainz general Gottfried von Leiningen in the battle of Fritzlar on July 23, 1427 and over Leiningen and Archbishop Konrad III. in the battle of Fulda (August 10, 1427), Count Johann II of Ziegenhain and Nidda had to take his counties of Hesse as a fief . The abbots of Fulda and Hersfeld agreed to the contract as overlords over parts of the county of Ziegenhain.

The last Count of Ziegenhain, Johann II. ("The Strong"), died in 1450 without a male heir, which led to a long and bitter dispute between two potential legal successors:

The brothers Albrecht (II.) And Kraft (V.) von Hohenlohe-Weikersheim, sons of Albrecht I, initially succeeded in getting rid of the Roman-German King Friedrich III. on May 14, 1450 to be enfeoffed with the Ziegenhain imperial fiefs and at the same time to be raised to hereditary imperial count. Ludwig von Hessen ignored the loan and occupied the county militarily. The inheritance dispute lasted until 1495, led to military and legal disputes, and ended with the victory of Hesse, but only after Landgrave Wilhelm II had settled the Hohenlohe claims with the payment of 9,000 guilders. The Ziegenhain territory, including the County of Nidda, remained with the Landgraviate. Since then, “Graf zu Ziegenhain, Graf zu Nidda” has been part of the title in the Hesse family and is still used today. However, the Hohenloher family retained the coveted title of count, which they had only acquired through the enfeoffment of the Ziegenhain County, and continued to use the six-pointed Ziegenhain star in their coat of arms.

The Landgraves, Electors and Grand Dukes of Hesse finally had the title of "Count of Ziegenhain" as one of their secondary titles.

→ Main article : List of offices in the county of Ziegenhain

The county of Ziegenhain consisted of the following when it passed to the Landgraviate of Hesse in 1450: