Schwalmstadt is the largest city in terms of population in the Schwalm-Eder district in northern Hesse . It was only created in 1970, when the two cities of Treysa and Ziegenhain were combined with the surrounding villages to form the city of Schwalmstadt as part of the regional reform in Hesse .

Schwalmstadt lies with many districts in the Schwalm basin on the western edge of the Knüllgebirge . The city, like this landscape in the West Hessian Basin , got its name, "The Schwalm" , after the river of the same name . Schwalmstadt is located in the northern area of ​​the Schwalm.

The closest larger cities are Kassel (about 50 km north), Bad Hersfeld (about 35 km east), Marburg (about 35 km southwest) and Fulda (about 80 km southeast). 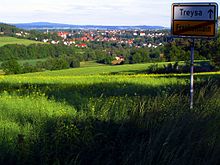 Treysa with its old town lies on a ridge - which rises about 35 meters above the valley level ( 212  m above sea level ) - at the confluence of the Wiera with the Schwalm.

Ziegenhain ( 214  m above sea level ) about 4.5 km east, is located directly northwest of the confluence of the Grenzebach into the Schwalm.

In the 8th century Treise was owned by the abbots of Hersfeld . The Counts of Cigenhagen were first mentioned in a document in 1144. In 1186 Treysa was taken over and fortified by the Counts. Treysa's landmark, the Martinskirche (today the Church of the Dead), was built in 1230. Treysa received city ​​rights between 1229 and 1270, and Ziegenhain received city rights in 1274. After the death of the last Count of Ziegenhain, Johann II. , In 1450, the county fell to the Landgraviate of Hesse .

The landgraves converted the castle in Ziegenhain into a palace in 1470, and Philip I of Hesse had it expanded into a water fortress from 1537 to 1548.

In August 1945 the negotiations for the establishment of the Evangelical Church in Germany (EKD) took place in Treysa (“Church Conference of Treysa”). This brought about a merger of the Lutheran , Reformed and United regional churches . Two other EKD church assemblies in May 1946 and June 1947 tried to initiate discussions about different views on the Lord's Supper and dealt with denazification .

Under the motto Hessian welcome! In 1995, Schwalmstadt was the venue for the 35th Hessentag .

From 1961 to the end of 2006, Schwalmstadt was the Bundeswehr base . In the Harth Berg barracks different units stationed, the Panzerartilleriebataillon 21, the rocket artillery 22, the training company 11/2, the escort battery 2, the replenishment regiment 2, the replenishment battalion 51 and the Feldjäger training company 700. In special ammunition storage Treysa were to 1992, 1962 Supervision of US soldiers stored the nuclear warheads for the two Treysa artillery battalions.

As part of the Reformation year 2017 , Schwalmstadt added the name affirmation city of confirmation.

As part of the regional reform in Hesse , on December 31, 1970, the two cities of Treysa and Ziegenhain merged with the surrounding villages of Ascherode, Florshain, Frankenhain, Niederbegrenzebach, Rommershausen and Trutzhain on a voluntary basis to form the expanded city of Schwalmstadt. On December 31, 1971, Allendorf an der Landsburg, Dittershausen and Wiera were added. Rörshain followed on April 1, 1972. The series of incorporations was completed with the incorporation of Michelsberg on August 1, 1972.

The Treysa and Ziegenhain city archives are kept in the Hessian State Archives in Marburg (holdings 330 Treysa and 330 Ziegenhain). Most of the holdings have been developed and can be researched online.

The city council is the highest body of the city. Its political composition is determined every five years in local elections by the city's electorate. Whoever has reached the age of 18 and is a German citizen within the meaning of the Basic Law or a citizen of one of the other member states of the European Union may vote. Everyone has to have been registered in the city for at least three months.

The individual voter has the opportunity his votes on several candidates - including those of various electoral lists - to distribute ( cross-voting ), or to pile on individual candidates ( cumulate ). To this end, the voter has as many votes as there are seats to be allocated. For the city council this is 37.

Distribution of seats in the 2016 city council
A total of 37 seats
a percentage of the valid votes cast
l 2006 as Linke.WASG 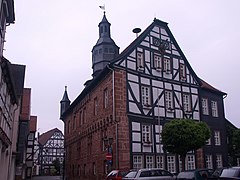 According to the Hessian municipal constitution, the mayor is the chairman of the magistrate , which in addition to the mayor of the town of Schwalmstadt has nine honorary councilors . Since December 1, 2016, the mayor has been Stefan Pinhard. He is elected until 2022. His directly elected predecessors were

Blazon : In gold, a black, red- armored, goat -headed eagle looking to the right . A six-pointed red star on his chest in silver.

Meaning: The coat of arms are historical symbols of the two cities and the old county of Ziegenhain .

The flag was approved on May 18, 1988 by the Hessian Ministry of the Interior.

"The municipal coat of arms is placed on the black and yellow flag web in the upper half."

The Witches Tower in Treysa

Panorama of the Schwalmwiesen at the flood retention basin

The Main-Weser Railway from Frankfurt to Kassel runs through Schwalmstadt. There is the Treysa train station and the Schwalmstadt-Wiera stop .

Regional trains from and to Kassel and the Mittelhessen-Express from and to Frankfurt in Treysa end every hour . In addition, an Intercity Express and a Regional Express on the Kassel – Frankfurt line stop in Treysa every two hours.

The Leinefelde – Treysa railway line ran through the city as a strategic railway line between Berlin and Metz , which was part of the Kanonenbahn .

Schwalmstadt is a junction of several, also national bike paths. Sometimes they run on the same route.

Coming from Neustadt, the German Unity Cycle Route continues via Wiera, Treysa and Ziegenhain to Loshausen. From Treysa the cycle path is identical to the Rotkäppchenland railway cycle path . The last missing section from Wiera to Treysa was completed in 2018.

The Hessian long-distance cycle route R 4 from Bad Karlshafen to Hirschhorn am Neckar leads from Fritzlar via Zimmerrode through the forest to the Landsburg in the Allendorf district, west of Ziegenhain via Loshausen towards Alsfeld.

The Rotkäppchenland cycle path runs along the former railway line in the Knüll. It leads from Schwalmstadt-Treysa via Neukirchen to Oberaula-Wahlshausen and on through the Aulatal to Niederaula to the Fulda cycle path R1. The Mittelland Route (D4) runs on the same route .

In 2015, a cycling concept was drawn up for the entire urban area. In addition to an inventory, it contains, among other things, the draft of a cycle network with different route categories and concrete proposals for the implementation of the recommended measures.

In the district of Ziegenhain , in the flood retention basin on the south-eastern edge of the village, the glider airfield “Der Ring” is located . There, the Schwalm aviation association and Akaflieg Frankfurt pursue gliding aviation .

The Schwalmstadt District Court is located in the Treysa district.

The Schwalmstadt JVA is located in the Ziegenhain district in the former hunting lodge of the Landgraves of Hesse-Kassel and an extension. After the open execution was outsourced in 2003 , only the closed execution exists in the prison , divided into the highest and lower security levels.

The city has, among other things, the general education schools , the Carl Bantzer School (cooperative comprehensive school), the Schwalmgymnasium and the school in Ostergrund (secondary and secondary school). Then there are the elementary schools, the Ziegenhainer elementary school, the Brothers Grimm School in Allendorf, the Eckhard Vonholdt School in Treysa, the Nieder Grenzebach elementary school and the primary school center. Schwalmstadt offers a wide variety of special needs schools . In addition to the Sankt-Martin-Schule, a school for learning assistance in the Schwalm-Eder district as a regional special educational advisory and support center, the special needs school Hephata as a comprehensive complex school as well as a supraregional counseling and support center should be mentioned; it is sponsored by the Hephata Diakonie and includes schools with a focus on emotional and social development, physical and motor development, mental development, learning and sick pupils. The Friedrich Trost School is also affiliated as a vocational school with its differentiated vocational school offers supplemented by special vocational school offers in the specialization areas of learning, emotional, social and intellectual development.

Vocational and continuing education schools are the Schwalmstadt vocational schools and the Hephata Academy for social professions .

The Hephata Academy is also the study location of the Evangelical University of Darmstadt . In bachelor's and master's degree courses, one can acquire degrees in various areas of social work.

Merkel Freudenberg Fluidtechnic GmbH (sealing and vibration technology) and Horn & Bauer GmbH & Co. KG (film technology) are located in the plastics processing sector . Konvekta AG (heating, air conditioning and refrigeration technology) works in the field of mechanical engineering and Optelec GmbH (electronic visual aids) in the field of electrical engineering. Furthermore, the logistics company Heidelmann GmbH (international forwarding and storage for temperature-controlled goods), the shoe manufacturer Erich Rohde GmbH and the Schwalm Bräu private brewery Friedrich Haaß KG have their headquarters in Schwalmstadt. The Hephata Hessisches Diakoniezentrum eV is active in the field of social education. Stadtsparkasse Schwalmstadt , located in the Treysa district, is the only independent credit institution based in Schwalmstadt. 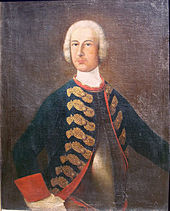 Municipalities in the Schwalm-Eder district