Jesberg is a municipality in the Schwalm-Eder district in northern Hesse .

Jesberg is located in the valley of the Schwalm tributary Gilsa on the southeast edge of the Kellerwald-Edersee nature park . The desert garden belongs to the municipality, at 675  m above sea level. NN highest mountain in the Kellerwald and the Schwalm-Eder district. The Hemberg ridge is located southwest of the municipality . The federal highway 3 runs through the community from Kassel to Marburg .

The community consists of the districts: 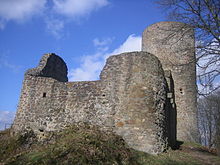 The Jesberg Castle , built at the beginning of the 13th century by the Linsinger family , was sold by them to the Archdiocese of Mainz in 1241 and taken back as a Mainz fief and was from then on - alongside Naumburg , Fritzlar and the Heiligenberg near Felsberg - one of the main bases in Northern Hesse for the Archbishops of Mainz in their disputes with the Landgraves of Hesse . The castle was extensively expanded and strengthened in 1426 and served the troops of Archbishop Konrad III of Mainz . von Dhaun under Count Gottfried von Leiningen, a nephew of the Archbishop, after their heavy defeat on July 23, 1427 on the Großenengliser Platte near Fritzlar as a saving refuge. It was conquered and partially destroyed by Kassel troops in the Hessian fratricidal war between Hessen-Kassel and Hessen-Marburg in 1469, rebuilt in 1524 and gradually fell into disrepair from 1586, when Jesberg became Hessian as a result of the Merlau Treaty of September 8, 1583, and the castle so that it had lost its military importance.

The Baroque castle in Jesberg was Maximilian of Hesse , a son of the Landgrave Karl of Hesse-Kassel , in the first half of the 18th century in Treisbach basic build. His father had assigned him the rule of Jesberg, including the Richerode estate and the village of Hundshausen , in 1723 after the lords of Linsingen and Ludwig Eitel had died out in the male line in 1721 and the Jesberg rule had thus fallen back to the landgrave . Between 1723 and 1753, at the request of Maximilian's four daughters, who survived infancy, the princess garden was built southeast of Jesberg in what is now the Jesberg State Forest.

During the time of the Napoleonic Kingdom of Westphalia (1807-1813), Jesberg was the capital of the canton of Jesberg and seat of the justice of the peace .

Jesberg had a station on the Zimmerrode – Gemünden (Wohra) line , the "Kellerwaldbahn", which was put into operation on October 2, 1911 . On May 28, 1972, passenger traffic on the entire route and goods traffic on the section between Zimmerrode and Gilserberg were suspended.

Probably the oldest place in the municipality is Hundshausen, whose first documentary mention dates back to 969. Densberg was first mentioned in 1085, Elnrode in 1343, Strang in 1565 and Reptich in 1580.

As part of the regional reform in Hesse , Reptich joined the community of Jesberg, which had previously only consisted of the core town of Jesberg and the Brünchenhain estate a good two kilometers to the northwest, on September 1, 1968. On December 31, 1971, the previously independent municipality of Elnrode-Strang followed , and on January 1, 1974, the municipality of Jesberg was given its current form by virtue of state law through the incorporation of Densberg and Hundshausen .

The majority of the residents of the community belong to the Protestant church . In addition to the core town, the parish of Jesberg includes the districts of Densberg, Hundshausen and Elnrode-Strang as well as Schönstein , politically a district of Gilserberg . Reptich belongs to the parish of Niederurff .

After the Second World War , a Catholic parish was founded in Jesberg , the members of which had moved here mainly as refugees. She initially used a room in Jesberg Castle for her services until her own church was inaugurated in 1967. Today the Catholic parish of Jesberg is looked after by the Neuental parish office .

In the core town of Jesberg there was a Jewish community before the Second World War , which is still remembered today by the Jewish cemetery laid out in 1904/05 outside the town on the edge of the Hembergs . The former synagogue on Densberger Strasse is now used as a residential building.

The coat of arms designed by Heinz Ritt was approved by the Hessian Ministry of the Interior on May 6, 1977. The tower symbolizes Linsingen Castle ; the small heart shield comes from the coat of arms of the Lords of Linsingen . The oak leaves and colors refer to the abundance of forests; the acorns stand for the five districts.

The flag was approved on November 3rd, 1988 by the Hessian Ministry of the Interior.

Jesberg has had an official partnership with the Polish municipality of Wysoka in the Piła district since 2002 . 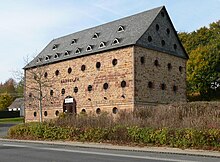 The Jesberg Castle with its accessible keep and the remains of Densberg Castle are well worth seeing . The Jesberg Castle and located outside the village in the forest Prinzessingarten evidence of Prince Maximilian of Hesse , who spent much of his life in Jesberg in the 18th century. A historic tithe barn is located on the B 3 .

Hiking in the nature park

Jesberg is located in the Kellerwald-Edersee nature park , which is criss-crossed by numerous hiking trails. A popular destination is the desert garden with the 28 m high Kellerwald tower built in 2003 about 3 km north of Densberg. The Kellerwaldsteig and the Lullus Path , among others, lead through the municipality . There is an educational forest trail between Jesberg and Densberg .

Public life in the community is shaped by associations that organize numerous regular events. There are volunteer fire departments in all parts of the village . A charcoal burner association has revived the traditional charcoal making in the Kellerwald and is offering public demonstrations. The amateur drama group Densberger Breakfast performs a play every summer on an open-air stage in the former Densberg moat . The largest sports club is TSV Jesberg.

The Jesberg leisure center , located on the Gilsa next to the community center, offers restaurants, a campsite , a heated outdoor pool , a sports field, three tennis courts and other sports and leisure opportunities.

In Jesberg there is a primary school , a kindergarten , a community center and a library run by volunteers. The districts of Densberg, Elnrode, Hundshausen and Reptich have village community houses. There are also a total of five children's playgrounds, two barbecue areas with barbecue huts and a water treading pool.

Municipalities in the Schwalm-Eder district