Stadtoldendorf is a town and at the same time the administrative seat of the municipality Eschershausen-Stadtoldendorf in the district of Holzminden in Lower Saxony , Germany .

The city is located on the edge of the Solling-Vogler Nature Park , nestled between the low mountain ranges of Homburgwald in the north, Elfas in the east, Amtsberge in the southeast, Holzberg and Solling in the south, Burgberg in the west and Vogler in the northwest. The Forstbach arises to the west of the old town .

The history of Stadtoldendorf is closely linked to Homburg Castle . Originally Stadtoldendorf was only called Oldendorp (old village), it was not until Heinrich von Homburg was granted city rights in 1255 that “city” was placed in front of the name, and the city was also called Stadt Oldendorf to distinguish it from several other places called Oldendorp or Oldendorf.

The parish church was mentioned for the first time in 1186. On May 12, 1479, a feud between Bohemian soldiers and Hanseatic troops took place at the gates of the city , with 900 dead and wounded. Stadtoldendorf was the capital under the rule of the nobles of Homburg and was fortified with walls and towers. The city ​​suffered severe damage in the Thirty Years' War . In 1625 the city was conquered and looted by imperial troops under General Tilly . The imperial and Swedish troops changed occupation seven times.

Later, Stadtoldendorf was away from the busy trade, as the old military and trade route, which had led from Westphalia via Höxter through Stadtoldendorf to Gandersheim and further, now ran north of the city between the Amelungsborn monastery and Eschershausen . In 1721 Stadtoldendorf was first mentioned as a garrison town, where a company of dragoons was stationed. In the Seven Years' War , French troops occupied the city. In 1814, after the Wars of Liberation against Napoleon, the garrison in Stadtoldendorf was disbanded.

In the middle of the 18th century, linen weaving developed in the city. From 1864, gypsum stone deposits were developed with the creation of four gypsum works . The Altenbeken – Kreiensen railway line , built in 1865 by the Duke Braunschweigische Staatseisenbahn , also helped to further economic growth . In 1873 the former linen trade became a separate economic area with 40 mechanical looms, employing 70 people.

In 1885, 2571 inhabitants lived in the city, which was also the seat of a local court and a chief forester's office.

At that time there was a larger Jewish community in Stadtoldendorf, which founded companies in the plaster, sandstone and weaving industries. A hospital, kindergarten, conference room in the New Town Hall and the Kellberg Tower east of Stadtoldendorf were created from Jewish foundations . On February 1, 1898, AJ Rothschild and Sons founded the oldest factory fire brigade for their weaving mill. The later company, Weberei Kübler & Co., had over 1000 employees in 1965 and went bankrupt on February 16, 1982.

For the development of the postal system in Stadtoldendorf, see: Braunschweig-Holzminden postal route .

In 1901 the Charlottenstift was founded by the manufacturer Max Levy and his wife, née Rothschild. From 1933 to 1945, the Charlottenstift was used as a labor camp, among other things, and did not resume operations until 1947. In 1998, the hospital was reorganized as a GmbH and until 2010 was sponsored by the Holzminden district and the Stadtoldendorf municipality .

In order to face the Reich presidential election, in February 1932 required Adolf Hitler , the German citizenship . According to the citizenship law of 1913, naturalization also took place if the candidate was employed in the public service or with recognized religious communities. Therefore, the Prime Minister of the State of Braunschweig, Werner Küchenthal , recommended Adolf Hitler an office as acting mayor in Stadtoldendorf. However, on February 25, 1932, Hitler received a post as a councilor at the Braunschweig embassy in Berlin. Otto Pieperbeck ( NSDAP ) from Düren was acting mayor for the city until May 1, 1933 , and he was also mayor of Eschweiler from 1944 to 1945 . During the Nazi era, at least 34 citizens of the Jewish faith from Stadtoldendorf were murdered.

On September 24, 1952, a British Gloster Meteor fighter plane crashed near Homburg below a youth camp. The two pilots were killed.

From 1959 Stadtoldendorf became a garrison town of the Bundeswehr . Initially, the 14th Panzer Battalion was stationed here. The field artillery battalion 15 from Hildesheim replaced the tank battalion on October 25, 1962 and was subordinated to the 1st Panzer Grenadier Brigade in Hildesheim. The first public swearing-in ceremony took place on September 5, 1963 . On April 27, 1965, the barracks, which were built from 1956 to 1959, were named "Yorck barracks" by the Federal Defense Minister, after General Ludwig Graf Yorck von Wartenburg . On January 1, 1967, the name was changed to Panzerartilleriebataillon 15. In September 1988, the Dutch Queen Beatrix visited the command post in the Yorck barracks during a maneuver of the 1st Dutch Corps. In June 2003 the garrison site was closed and the barracks for civilian users were put out to tender.

After the local elections on September 11, 2016 , the municipal council consists of:

Sculpture as a document of partnership

Since 1989 there has been a partnership with La Montagne in the Loire-Atlantique department , France . A monumental sandstone sculpture named Mother of the Earth by the French sculptor Pierre Garçon (1998) is a gift from the twin city

Blazon : “In red a growing, black grooved, silver crenellated wall with a central, ungrounded, blue hip-roofed gatehouse with a drawn silver portcullis in the open portal with a label, inside of a 16-fold silver-blue border in red a golden lion , raised by two black ones Arched window, a silver church building growing out of the wall with two tall black arched windows set on the outside, blue roof, on top of it a silver roof turret across the corner with two black arched windows and a golden tower ball with a cross, blue pyramid roof between two black grooved, silver crenellated towers, each with a black arched window . "

Description of coat of arms: The coat of arms shows elements of the former city fortifications and the golden Homburg lion in a red, silver-blue shield .

In the village there is a Catholic, a Protestant church belonging to the Holzminden-Bodenwerder parish , an Evangelical Free Church ( Baptist ) and a New Apostolic church.

The Evangelical Free Church in Stadtoldendorf was founded on June 19, 1910.

Stadtwerke Stadtoldendorf GmbH was founded in 1903, has been operating as a GmbH since 1973, and handles the municipal gas and water supply in cooperation with E.ON Westfalen Weser .

In 1938 the first gypsum quarry was put into operation at the Stadtoldendorf site, and from 1972 the Knauf Gips plant began producing gypsum boards.

The station Stadtoldendorf is located on the railway line Altenbeken-Kreiensen (- Goslar ) ( Course book route 355). The Kreiensen - Paderborn section has been served by regional trains of the NordWestBahn since December 2013, sometimes every hour, otherwise every 2 hours . Diesel multiple units of the type Bombardier Talent (DB class 643) are used in local rail passenger transport .

The main line was opened at the end of the 1860s and was an important link between Berlin and the Ruhr area . It was once double-tracked. After the division of Germany, the flow of traffic shifted, so that the railway line lost its importance. Since the NordWestBahn took over passenger traffic between Holzminden and Paderborn in 2003, there have been no through trains in the direction of Paderborn. In December 2013, the Holzminden - Kreiensen section also went to this company, since then the trains have been running at least every 2 hours without changing trains from Kreiensen to Paderborn.

There are numerous bus connections u. a. to Dassel , Holzminden , Einbeck , Bodenwerder and Eschershausen . The tariff of the Verkehrsverbund Süd-Niedersachsen (VSN) applies to all local public transport in the Holzminden district .

The place has a heated outdoor pool, several sports fields (one with artificial turf). There is also the Mammut amusement park for off-road vehicles on the former Bundeswehr site.

The city museum presented the cultural history of the city in the Charlotte-Leitzen-Haus in the old town, until it was converted into a combination of kindergarten and municipal archive in 2018. The house, a sandstone building, is named after a previous owner and is also known as the Leitzenhaus . The economic history of the city is presented on the outdoor area “Mühlenanger”. There is an ensemble of buildings on a former farm of Derer von Campe consisting of 3 former tithe barns, the gatehouse of the former weaving mill and a section of the field railway of the former plaster works. In addition, the stair mill belongs to the ensemble, a former water mill, which is named after the stairs leading up to the city wall. The associated diesel locomotives and tractors are presented annually on the Open Monument Day .

Buildings from the early days

The Kellberg Tower is a 20 m high observation tower on the Kellberg east of Stadtoldendorf ( 343.1  m above sea  level ) 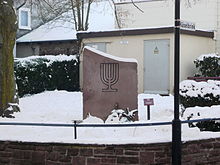 Not far from the train station is the Jewish cemetery .

In 1981 a memorial stone was erected in memory of the murdered Jewish citizens on the site of the former synagogue in Kuh-Strasse.

On December 15, 2007, eleven stumbling blocks were laid in Stadtoldendorf, remembering by name the fate of Jewish victims of National Socialism. The initiator is a descendant of the Löwenstein, Rosenhain and Rothenberg families.

On November 20, 2009, another fifteen stumbling blocks followed - for the first time, the fate of a non-Jewish victim of the Nazi era is being remembered.

Personalities who are connected to Stadtoldendorf

Wikisource: Instead of Oldendorff in the Topographia Braunschweig Lüneburg (Matthäus Merian)  - sources and full texts

Municipalities in the district of Holzminden