The title of this article is ambiguous. Further meanings are listed under Hehlen (disambiguation) .

Hehlen is a municipality in the Holzminden district in Lower Saxony and belongs to the joint municipality of Bodenwerder-Polle .

The community is located on the Weser below Bodenwerder and between Hameln and Holzminden.

Hehlen borders in the north on the municipality of Emmerthal in the district of Hameln-Pyrmont , in the northeast on Heyen (now connected by a bridge), in the east on Bodenwerder , in the south on Pegestorf and in the west on Ottenstein .

The place name Helte, district of Emsland, is in a loop of the hare on slightly elevated ground. Hehlen has a similar situation. Here the Schiffberg rises sharply beyond the village. The place name therefore means the settlement on the slope.

In the 9th century Hehlen was first mentioned as a helicopter . In the 12th century it was known as Helen .

When the Homburg fiefdoms died out in 1409 and then in 1558 the ducal-Braunschweig fiefdoms in the form of the Lords of Frenke, the fiefdom was transferred to the older “white” tribe of the Schulenburgs , who were still seated here . Fritz von der Schulenburg was one of the first gentlemen from this branch on the Weser . As an imperial mercenary leader in the service of Duke Heinrich the Younger of Braunschweig-Lüneburg, he earned money and reputation. His wife Ilse von Saldern , who had lived separately from him since 1574, had the Hehlen moated castle, flanked by towers, built in 1579–1584 . With the construction of the palace began the development of a number of large noble palaces of the Weser Renaissance , the most magnificent of which are the Hämelschenburg , Bevern and Schwöbber palaces .

In 1596 one of the oldest paper mills in the Upper Weser region was built in Hehlen by Ilse von Saldern, the wife of Fritz von der Schulenburg.

In 1807 the court in Hehlen was dissolved.

In 1900, Hehlen was connected to the railway network by the Emmerthal – Vorwohle railway operated by the private Vorwohle-Emmerthaler Eisenbahn-Gesellschaft (VEE). In 1905 a lime and marl factory was founded on the outskirts.

In 1920 the Braunschweigische Lederwerke Heller & Cahen was founded to manufacture Vachetta leather .

At the end of 1939, the Jewish family Alex and Bertha Bach had to leave their manufactory and fashion goods store and house on Hauptstrasse. A sale to the Hehlen factory owner Asmus failed at the instigation of Mayor Theodor Kreibaum, who was also the NSDAP local group leader, at the Braunschweig Ministry of the Interior. He described the factory owner as too “friendly to Jews” and Bach had to sell his property to the community at a lower value and fled to Bolivia. 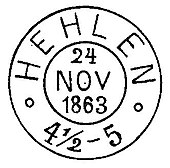 On November 1, 1862, a postal expedition was set up in Hehlen . In 1872 the postal expedition was converted into a postal agency . The two-circle stamp with date, year and time had been in use since 1862. The grate stamp with the number "26" which had previously been used in Immendorf was used to cancel the postage stamps . For the development of the postal system in Hehlen, see also the Braunschweig – Holzminden postal route .

On January 1, 1973, the communities Brökel, Daspe and Hohe were incorporated.

After the local elections on September 11, 2011 , the municipal council consists of:

Hehlen Castle was purely a representative building without a military purpose. It is a four-wing complex with angular stair towers in the courtyard and a drawbridge over the water-filled moat. In the courtyard (private, no visit), a double portrait of the client couple and their alliance coat of arms are attached via two arched portals, in the east of the courtyard there is an epitaph of the client.

1886–1888 changes were made inside. The moated castle of Hehlen remained in the possession of the Reichsgrafen von der Schulenburg (since 1728) until 1956, when Count Johann-Heinrich sold it to the Hannoversche Siedlungsgesellschaft. The furnishings went to the free antiques market, some of the pictures to the State Museum in Hanover , and the book collection to the Herzog August Library in Wolfenbüttel. The castle was acquired by Walter Koch (1911–1998), the owner of Machwitz Kaffee , whose family still owns it in 1958 . A café is operated in one of the farm buildings.

Hehlen is on the Weser cycle path that runs from Hameln to Hann. Münden leads.

The place is located on the Emmerthal – Vorwohle railway line, which is now closed for both passenger and freight traffic, owned by Vorwohle-Emmerthaler Verkehrsbetriebe GmbH (VEV) - until 1967: Vorwohle-Emmerthaler Eisenbahn-Gesellschaft (VEE) - which runs from Emmerthal via Hehlen, Bodenwerder -Linse and Eschershausen as far as Vorwohle , where there was a connection to the Holzminden - Kreiensen railway line . The former reception building of the Hehlen train station now houses an inn.

Raiffeisenbank Hehlen eG was founded in 1893 and merged with Volksbank Weserbergland eG in 2000 (since 2017 VR-Bank in southern Lower Saxony ).

In 1919 the Braunschweigische Lederwerke J. u. E. Heller , today HELLER-LEDER GmbH & Co. KG (annual turnover in 2016 around 55 million euros, 220 employees), supplemented on April 24, 1990 by the subsidiary Helcor Leder Tec GmbH . The company is one of the few large employers in the area. The tannery can be perceived by typical smells.

At the end of the village in the direction of Hameln there is a large lime works owned by the Portlandzement-, Kalk-, Margel- und Steinwerke GmbH, Hehlen / Weser , founded in 1905 by Heinrich Reitemeyer , whose owner was the Norddeutsche Cement-Verband GmbH (NCV) based in Berlin-Wilmersdorf until 1943 and was then taken over by Blankmann from Hehlen. From 1949 the lime works was taken over by the Lower Saxony cement works and the name was changed to Kalk-, Mergel- und Steinwerke GmbH . 2004 Takeover by Andreas Goedecke and renaming to Kalkwerk Hehlen GmbH .

In 1950 the chalk factory Jürgen Knopf was founded , which is now located in Eschershausen under the name PyCom GmbH & Co. KG .

The company Tiefbau Timmermann was founded in 1978 . Other companies are Asmus GmbH , founded in 1928 , a manufacturer of cleaning and care products, now operating as AsKü-Gebäudereinigungs-Service GmbH .

On October 17, 2005, a biogas plant with an electrical output of 1000 kW was put into operation in Hehlen under the leadership of Naturgas Hehlen GmbH & Co. KG and Bioenergie Hehlen GmbH & Co. KG . This makes it one of the larger bioenergy plants in Germany. In addition to the electrical power that is fed into the public power grid, the block -type thermal power station also supplies HELLER-LEDER GmbH & Co. KG with process heat. The two biogas plants include a storage area for maize silage built in 2010 , where contractually bound farmers store maize for the operation of the plants.

Municipalities in the district of Holzminden