The University of Ulm was founded in 1967 as the "Medical and Natural Science University Ulm" and is the youngest university in Baden-Württemberg. The university has around 10,000 students for the 2019/20 winter semester. In the course of its internationality, it offers all its students language training ( UNIcert ) with various languages ​​and subject areas. The university is known for its close cooperation with companies that are based around the university in a science city .

After the Science Council had called for new universities to be founded in the Federal Republic of Germany in 1959, the “Ulm University Working Group” was founded on June 8, 1960. After the Ministry of Culture planned a Medical Academy for Ulm in 1962 , the working group tried to expand it to become a medical and natural science university . The founding committee for the university, chaired by Ludwig Heilmeyer , was set up on March 21, 1964. On February 25, 1967, the official founding ceremony of the Medical and Natural Sciences University of Ulm took place. In December 1967, the university was named University of Ulm (Medical and Natural Science University) by the state government of Baden-Württemberg: It received the name and rank of a university .

In 2014 and 2015, Ulm University received the title of best young university in Germany in the THE 100 Under 50 ranking of the British magazine Times Higher Education . It ranks 15th worldwide among 100 universities founded less than 50 years ago. In the World University Ranking , which was published in 2016 under the auspices of the University of Oxford , the University of Ulm reached 135th place worldwide, and 13th among the 108 German universities.

The main research areas are:

As part of the excellence strategy of the federal government and the states ( excellence initiative ), the International Graduate School for Molecular Medicine Ulm (IGradU) was funded in 2007 in the funding line "Graduate Schools". In 2018, the joint research project “Energy storage beyond lithium - new storage concepts for a sustainable future” of the University of Ulm and the Karlsruhe Institute of Technology (KIT) from 2019 to 2025 was selected for funding in the “Cluster of Excellence” funding line.

The university maintains numerous relationships and exchange programs with partner universities in and outside of Europe. The International Office advises and supports foreign students and is the contact point for the German Academic Exchange Service (DAAD), the Fulbright Commission and the British Council . The other tasks of the International Office include:

Together with the University of Stuttgart , the university is the sponsoring school of the German University in Cairo . At this private university, courses based on the German model began in October 2003. In the project funded by the German Academic Exchange Service , the Federal Ministry of Education and Research , the Ministry of Science, Research and Art Baden-Württemberg and the Stifterverband für die Deutsche Wissenschaft , the curricula were developed at the German partner universities and adapted to the conditions in Egypt . Likewise, the link between teaching and research typical of the German university is established, which is also promoted by the equal representation of lecturers from Germany and Egypt. The University of Ulm coordinates here, among other things. a. the application process. 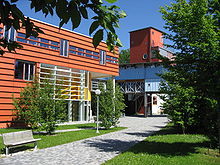 President of the University

Since Ulm University does not have a humanities faculty, research and teaching in the field of philosophy , languages, philology , interdisciplinary key qualifications , cultural studies and general academic further education are combined in a cross-faculty department for humanities. The department includes the following facilities at Ulm University:

The Botanical Garden of Ulm University was founded in 1981 and is one of the largest botanical gardens in Germany with an area of ​​around 28 hectares. It borders the campus to the south-east and extends over parts of the Eselsberg and the Lehrer valley. The botanical garden includes several greenhouses (mountain and lowland rainforest), the new apothecary garden , the green classroom and, since the summer of 2013, a beer garden at the Botanicum . Admission for students is free.

The communication and information center (kiz) is the university's central service provider for library, IT and media services at Ulm University. In 2002, the kiz emerged from the previously independent central facilities library, computer center, headquarters for photo, graphics and reproduction, voice communication and media technology. 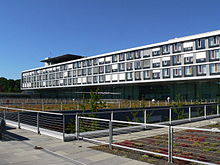 The Ulm University Hospital provides direct and indirect health care as well as - in close cooperation with the Medical Faculty - the training of students in human medicine, dentistry and molecular medicine. The clinic comprises 29 clinics with around 1,100 beds and 13 institutes and employs around 6,000 people. Around 43,000 patients are treated annually. A main focus of the Ulm University Hospital is the treatment and research of tumor diseases. The Comprehensive Cancer Center Ulm (CCCU ) set up for this purpose has a far supra-regional catchment area.

Villa Eberhardt on the Safranberg in Ulm

The Science Center Schloss Reisensburg is a meeting and conference center of the University of Ulm near Günzburg . The management is subordinate to the former Medical Director of the Clinic for Internal Medicine II at the Ulm University Hospital, Prof. Dr. Vincent Hombach. The building can also be used for external events and companies. The castle has belonged to the university since 1997.

Reisensburg Castle is secluded on an idyllic hill near Günzburg. As a dependent foundation in the corporate assets of Ulm University, it promotes scientific cooperation at regional, national and international level, cooperation between university and non-university institutions, knowledge transfer in education, further training and further education, the dialogue between science, business, politics and administration .

The Villa Eberhardt, the former residence of the Ulm industrialists family Eberhardt on the Safranberg, was given to the University by the city of Ulm on its 20th anniversary in 1987 and serves as a scientific meeting place and guest house of the University of Ulm. A large knight's hall is located on the ground floor and can be booked for events and conferences; Offices and seminar rooms are located on the first floor and several guest rooms on the second floor.

The StuPa is made up of ten members elected by the student body, the two student members of the Senate and six representatives of the student council.

The student councils represent the students at the level of the degree programs. Among other things, they carry out the introductory semester courses (ESE) at the beginning of a new semester. There are currently twelve student councils at Ulm University:

The university groups (HSG) participate in the representation of interests and the formation of opinions of the students as well as in the organization of everyday student life , without being officially part of the student body .

The campus is located on the 620 m high Upper Eselsberg. This makes Ulm University the highest university in Germany. In the middle of the campus, the Swabian Albverein , in cooperation with the German St. Jakobus Society , led and marked the Franconian-Swabian Way of St. James , which ultimately leads as a pilgrimage route to Santiago de Compostela in Spain.