The music college from the town hall square 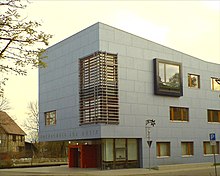 The State University of Music Trossingen is one of 24 music colleges in Germany. It is located in Trossingen in Baden-Württemberg and is state sponsored. It is the music academy of the Euregio Bodensee and has been a member of the International Lake Constance University (IBH) since January 2009 .

The range of courses includes Bachelor and Master courses including school music with the broadening subject of jazz and popular music and Protestant church music (B) as well as the postgraduate courses Ev. Church music (A) and the soloist class. With the Institute for Early Music , the university has a training center for historical performance practice . Further training focuses are the subject of rhythm as well as instrumental and vocal methodology in cooperation with educational institutions in the region.

The regional center for music design performance was founded in 2017 as a new focus . It sees itself as a bridge builder between innovative approaches of our digital age for artistic practice, research and teaching and traditions of artistic disciplines. In the sense of a studio, it creates new spaces for the preservation and continuation of the musical-artistic heritage, formulates musical design requirements and questions media sound design.

Chamber music concert series have established themselves in cooperation with organizers, and project phases take place every year in which contemporary chamber music, large symphonic and vocal works are developed and presented in the region. Highlights are the baroque orchestra and baroque opera projects of the Institute for Early Music, the stage projects of the rhythm department, the symphonic and choral-symphonic projects of the university choir and orchestra, as well as music theater productions in cooperation with the regional cultural scene. Since 2006, the university has been organizing an off-festival for young composers together with the Donaueschinger Musiktage under the title The Next Generation .

There is a cooperation with the youth music schools in the region in the field of instrumental and vocal methodology. The specialist group is in constant exchange of ideas with the regional association of youth music schools in Baden-Württemberg. Since the summer of 2005, the Trossingen University of Music has also been the sole shareholder of the Villingen-Schwenningen gGmbH Music Academy , with which it aims to promote the general and talented musicians in the area.

The music academy was expanded by a fourth construction phase, the foundation stone of which was laid on April 21, 2005. The building was officially inaugurated in the 2006/2007 winter semester. In this context, the university library was also expanded and modernized. The open access library has (rounded) 26,500 books, 60,000 sheet music, 7,000 sound carriers, 80 current journals and yearbooks and 650 microforms. The entire holdings are recorded in the Southwest German Library Network (SWB) and can be researched in the OPAC of the music college and borrowed via a local library system.

Under the leadership of the university, an Erasmus network was founded to which over 40 European music universities now belong. Since 1997 there has been a partnership with California State University in California , USA.