Etaples , also Étaples-sur-Mer ( Picard ETAP , Dutch stack ), a French city with 10,865 inhabitants (at January 1, 2017) in the department of Pas-de-Calais in the region of Hauts-de-France . It is located in the arrondissement of Montreuil . The name is derived from the Latin word stapulae .

The inhabitants are called Étaplois .

Étaples is a port city in northwest France on the north side of the mouth ( estuary ) of the Canche in the English Channel between the cities of Boulogne-sur-Mer (23 km north) and Berck (13 km south) on the Côte d'Opale ( Opal Coast ). The seaside resort of Le Touquet-Paris-Plage is on the south side of the river estuary .

Bridge of the D 940 over the river Canche, in the background Étaples.

Étaples was the Quentovicus or Stapulae from which the Roman military set out to invade Britain .

A dramatic time began for Étaples in the 9th century. In some changes of ownership it was looted, burned down by the Normans who spread across the country in search of booty. They had made the city the starting point and assembly point for the riches stolen from the area. In 1172, Matthieu d'Alsace , Count of Boulogne , had a fortress built on the ruins of a castle from Roman times which, judging by the traces, was burned down during a raid by the Normans.

Jacques Lefèvre d'Étaples was born here around 1450 , one of the first humanists and Greekists in France and author of the first complete French translation of the Bible.

In 1492, a peace treaty between Charles VIII of France and Henry VII of England was signed in Étaples . In 1660 the castle was destroyed.

From 1803 to 1805, in preparation for an invasion of England , Napoleon assembled a strong army along the coast of the English Channel, the famous "Camp de Boulogne". For two years in Etaples and its surroundings was the 6th Army Corps of Marshal Ney stationed.

During the First World War , the British Army installed a huge troop camp on Mont Levin, which is now built on. A mutiny broke out there in 1917 . German planes bombed the city, which is why Étaples was awarded the Croix de guerre in 1920 . 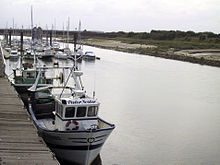 The place lives from fishing, but also benefits from the proximity to the neighboring seaside resorts. It houses a fleet for fishing as well as the low houses in the narrow streets of the fishing district and is therefore known as the “Cité des pêcheurs en Côte d'Opale”, or city of fishermen on the Opal Coast.

With the bridges of the D 940 and the railway line between Abbeville and Boulogne-sur-Mer, Étaples is the only crossing over the Canche in its wide estuary. A large part of the road traffic to the tourist resorts of Le-Touquet and Stella-Plage (municipality of Cucq ) is therefore handled via the road bridge . A driveway to the A16 autoroute connects Étaples to the long-distance traffic east of the town.

A small museum on the harbor promenade provides information about the history of the Étaples fishery.

Wide beaches, which are almost completely flooded at high tide, are located in the northwest of the town. Their hinterland is designated as "Réserve naturelle de la baie de Canche" or "Réserve ornithologique", ie as a nature reserve Canche Bay or bird sanctuary. This nature reserve begins south of the neighboring town of Saint-Gabriel and extends almost to Étaples. The area consists of sandbanks , mud flats and salt marshes on the coast as well as a dune landscape that slowly rises to the east.

The Canche Bay nature reserve is home to one of the largest European gull colonies (around 100,000 animals), including sometimes more than 10,000 herring and herring gulls . The migratory birds that regularly stop there include the common woodcock (Limosa lapponica), the ringed plover (Charadrius hiaticula) in spring, shelduck (Tadorna) in July, sparrowhawk (Accipiter nisus) in autumn and sandpipers in winter. There are also wild boars , roe deer , foxes , hares and six types of frogs and toads.

A town partnership with the German Hückeswagen has existed since July 29, 1972 . Further partnerships exist with the English cities of Whitstable and Folkestone , both in Kent .

Municipalities in the arrondissement of Montreuil