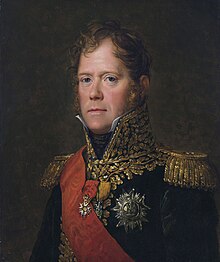 Ney was born in modest circumstances as the second son of the cooper Pierre Ney (1738-1826) and his wife Margarethe Grewelinger (1739-1791) in the French exclave Saarlouis at Bierstraße 13. His school days at the local Augustinerkolleg (today's Gymnasium am Stadtgarten ) ended at the age of 13, after which he began training as a notary's apprentice and worked as a clerk for the public prosecutor's office. After a job at the Dillinger Hütte in 1788 he joined the Regiment Colonel-Général hussards as a commoner and was a non-commissioned officer at the outbreak of the revolution . In 1792 he was elected Capitaine and in 1796 promoted to Général de brigade . During the coalition wars he took the city of Mannheim in 1799, meanwhile promoted to Général de division . He then fought under Masséna in Switzerland and under Moreau in Germany. On September 13, 1801, Ney was admitted to the La Candeur field box . After the Peace of Lunéville , Ney went to Switzerland as envoy , where he brought about peace and the act of mediation on February 19, 1803 .

CV on the plinth of the Ney monument in Paris

On the occasion of his imperial coronation , Napoleon I appointed Ney Marshal of the Empire in 1804. As the commander of a corps , Ney opened the campaign of 1805. Units of his army corps defeated the Austrians Archduke Ferdinand near Günzburg on October 9th. This was followed by the victory in the Battle of Elchingen on October 14th and the surrender and surrender of the city of Ulm by the Austrian General Karl Mack von Leiberich . On June 6, 1808, Ney was appointed Duke of Elchingen for this purpose. In the war of 1806 and 1807, Ney carried as leader of the VI. Corps contributed greatly to the successes, particularly in pursuing the defeated Prussian army after the battle of Jena . Erfurt and Magdeburg surrendered to him, in 1807 he fought against the Russians and Prussians near Eylau and Friedland .

In 1808 Ney accompanied the emperor to Spain , but in 1811 he was at odds with Masséna about the further plan of the campaign and showed such great resistance that the latter removed him from the army. Ney then withdrew before he took command of the III. Corps received. 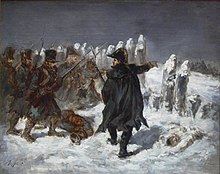 Ney now proved himself above all others in the Russian campaign of 1812 , for example in the Battle of Smolensk , but especially in the Battle of the Moskva . On the evening of this battle Napoleon awarded him the title of "Prince of the Moskva". Since the battle of Vyazma, Ney had been the permanent rearguard leader during the retreat from Russia and therefore almost fell into Russian captivity in the battle of Krasnoye . So the episode has been handed down that he was the very last one to march into the Prussian Gumbinnen just before the Cossacks who pushed in, and that the completely frozen and neglected man in the officer's mess was not recognized and he wanted to be thrown out without further ado. Then Ney replied: “Don't you recognize me? I am the rearguard of the Grand Army  - I am Marshal Ney. "

In the campaign of 1813 Ney withstood the first attack of the allies at the Battle of Großgörschen , commanded the center in the Battle of Bautzen and then advanced into Silesia . Attacked by Blücher , Ney was forced to retreat from the position near Liegnitz . He had to hand over his forces to the French Marshal Jacques MacDonald and return to Dresden with Napoleon , where he helped defeat Karl Philipp zu Schwarzenberg on August 26th and 27th . After Oudinot's defeat at Großbeeren , Ney was given supreme command of the armed forces destined to advance on Berlin , but was defeated by Bülow at Dennewitz on September 6th .

In 1814, Ney became commander of the Imperial Guard . He fought at Brienne , Montmirail , Craonne and Châlons-sur-Marne with distinction. After the defeat of the imperial armies and the capture of Paris by the war opponent, he urged Napoleon I to abdicate and went over to the Bourbons . King Louis XVIII made him peer of France and appointed him commander of the 6th military division.

After Napoleon's return from Elba , however, he resumed his service at Auxerre on March 25, 1815 and received supreme command of the 38,000-strong left wing (1st and 2nd Corps) during the battle of Waterloo . Five horses under him were shot and finally he stormed on foot. He led the great cavalry attacks against the English center and then personally led the Old Guards to the decisive attack, which however failed.

To set an example, Louis XVIII. Commissioned Police Minister Fouché to draw up a list of officers who had been in the service of Napoleon during the reign of the Hundred Days . It explicitly concerned the period from Napoléon's arrival in France on March 1, 1815 to March 20, 1815, when the king had to leave the capital. With the order of July 24, 1815, this list was published, on which the highest ranking was the former Marshal Ney. After refusing to escape from France, Ney, who was staying with his wife's cousin in the Château de Bessonies in the Lot department , was arrested on August 3, 1815 after being betrayed to the authorities by Jean-Baptiste de La Tour de La Placette when he was passing through to his property Château de La Placette in Cayrols in the Cantal department . After Ney was initially arrested at the Château de Bessonies, he was taken to Paris, where he arrived on August 19. After being admitted to the Conciergerie , he was soon taken to the Palais de Luxembourg , where his stay was more in keeping with his class. On the way there, Général Exelmans offered to free him and leave the country with him, but Ney refused. Some officers tried to free him from the Palais du Luxembourg, but Ney refused again.

Ney's tomb in the Pere Lachaise cemetery in Paris

On November 8th, he was finally brought before a court martial , which however declared that it was not competent to negotiate with him as a peer . Ney was sentenced to death on December 6th by the Chamber of Peers for high treason . His undoing was that he was killed by Louis XVIII. had been sent out to arrest Napoléon with the 5th e régiment d'infanterie , but he and the regiment immediately defected to this. Ney was shot near the Jardin du Luxembourg in Paris on December 7, 1815 . He wore plain civilian clothes and rejected a blindfold. He gave the order to fire himself with the words:

“Soldiers, when I give the order to fire, shoot my heart. Wait for the command. It will be the last one I give you. I protest my conviction. I've fought a hundred battles for France, but not one against it. [...] Soldiers shoot! "

Michel Ney left three sons who later published his memoirs . A descendant of his, the sculptor and admirer of Arthur Schopenhauer's philosophy , Elisabet Ney , made a bust of him in October 1859 in Frankfurt am Main.

Ney is immortalized in the 13th column on the eastern pillar of the Paris Triumphal Arch .

Ney is the protagonist of the following paintings:

Ney has been portrayed repeatedly in films: