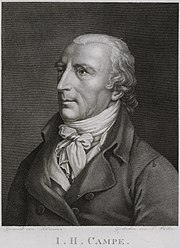 Ideal image of the Campe'schen educational institution on Hammer Deich in Hamburg, etching by Daniel Chodowiecki

Tomb of Joachim Heinrich Campe on the Magnifriedhof in Braunschweig

Memorial stone in Hammer Park , Hamburg : JH Campe worked here from 1778 to 1783 and wrote his Robinson. Hamm, d. Jan. 31, 1883. The 5 civil associations a / d Bille. The stone was originally set up in front of Campe's house on Hammer Deich, later moved to its current location at the corner of Campestrasse and Robinsonstrasse and only after the destruction of South Hamm in the Second World War.

Joachim Heinrich Campe (born June 29, 1746 in Deensen , † October 22, 1818 in Braunschweig ) was a German writer , linguist, educator and publisher at the time of the Enlightenment .

Joachim Heinrich was born on June 29, 1746 in Deensen near Holzminden as the second son of the couple Burchhard Hilmar Campe (1695–1760), active as a businessman, and his wife Anna Margarethe geb. Gosler born. The family was originally of noble descent, but the father had deliberately given up the title of nobility that had been legally awarded to him after a legal dispute with the family because he did not want to identify with the classifications. From 1760 Joachim Heinrich was one of the first students to attend the Amelungsborn monastery school in Holzminden (today Campe-Gymnasium ) and then from 1765 studied theology in Helmstedt . His teacher was Wilhelm Abraham Teller , who had to leave Helmstedt after strong hostility because of his clearly enlightening position. He attested that his student had extraordinary abilities. Because of similar views, Joachim Heinrich Campe also changed universities and studied Protestant theology in Halle from 1768 (with Johann Salomo Semler 1725–1791). He completed his studies on December 20, 1768 with the thesis Nonnulla de vi consuetudinis quaestionibus homianis addita in the field of philosophy. He was then from 1769 to 1773 tutor and tutor of Heinrich Friedrich Ferdinand von Holwede (1762-1817), the half-brother of Alexander and Wilhelm von Humboldt in Tegel . During this time he came into contact with the ideas of the Enlightenment and the people involved in the house of the Humboldt family. From 1773 to 1775 he was field preacher of the regiment of the Crown Prince, later King Friedrich Wilhelm II, stationed in Potsdam . In 1775 he returned to his position as tutor of the Humboldt family and also taught the siblings Alexander and Wilhelm von Humboldt. During this time he took part in a competition of the Royal Academy of Sciences in Berlin on the subject of sensations and cognitive powers of the human soul . From 1776 he worked briefly as a preacher at the Heiliggeistkirche in Potsdam. But since he was much more interested in educational work, he briefly accepted a call to the Philanthropinum (a reform school) from Johann Bernhard Basedow in Dessau , where he became co-curator , soon also its director. But since he had fundamentally different views on the educational methods with which the sons of wealthy merchant families looked after there were taught, there were several conflicts. After an argument with Basedow, he left Dessau and went to Hamburg. But in order not to reveal his actual reasons, he disguised this departure as an escape.

Campe had joined the Masonic lodge Balduin zur Linde in Leipzig in 1777 , and in 1778 the Absalom zu den Drei Netteln lodge in Hamburg . He resigned in 1780, probably because he was disappointed in his charitable intentions; in any case, he has not attended any more boxes.

In 1777 Jakob Böhl , the head of a large trading company, entrusted him with the upbringing of his sons. In the then rural area of Hammerbrook , Campe am Hammerdeich (today Hamburg-Hamm ) founded its own educational institution. During this time he cultivated and intensified contacts with the Berlin and Hamburg Enlightenmentists Friedrich Gottlieb Klopstock , Mathias Claudius , Gotthold Ephraim Lessing . He frequented the houses of Reimarus and Sieveking . The youth novel Robinson the Younger , published in 1779/1780 , a free translation and adaptation of Robinson Crusoe by Daniel Defoe , has been translated into numerous languages, is considered the first specific German youth publication and has become one of the most successful German-language youth novels ever. In 1781 the youth novel The Discovery of America followed . The royalties made Campe financially independent.

Campe, along with the writers Christian Felix Weisse and Christian Gotthilf Salzmann, is one of the founders of the modern genre of targeted children's and youth literature . His work The Discovery of America (1781/82) marks the transition from children's to youth literature and at the same time served as a definition aid for the genre of youth literature . He created a series of books for children and adolescents, all of which should be educational, but also friendly and aimed at a certain age group. His publications range from primers to collections of translated and personal travelogues to educational books on behavior for boys and girls. Campe thus coined an " Enlightenment-specific philanthropic - literary form". This pedagogical narrative style was adopted by other writers and, in the case of Carl Goehring, for example, was used for national pedagogical purposes about a century later .

At Easter 1783 Campe handed over the management of his educational institute to Ernst Christian Trapp and retired with four students to an estate in Trittau (today the Stormarn district ). His active time as an educator now ended, and he devoted himself increasingly to his writing. He remained true to his pedagogical calling in his writings. The main focus of his educational considerations were the discussion of Rousseau's Émile or About Education , questions of professional education , character formation and general educational issues such as literary education. Gender education was particularly close to his heart. With his Theophron he tried to give the boys guidance in life with the “fatherly advice”. Gender instruction (education) was so important to him that he made two parts of his general revision available for the subject . Johann Friedrich Oest and Peter Villaume were the authors. Campe made trips through Germany and Switzerland.

In 1786, Karl Wilhelm Ferdinand von Braunschweig-Wolfenbüttel appointed Campe as “High Princely School Councilor” to head a school directorate in Wolfenbüttel. Under the administrative direction of Karl August von Hardenberg , who later became Prussian reform chancellor, the country's school system was to be comprehensively reformed. Other members of the board of directors were Konrad Heusinger , Johann Stuve and Ernst Christian Trapp . The drastic reform plans failed due to the resistance of the Catholic Church and the estates. In 1790 the school directorate was dissolved. Due to his pedagogical reputation, he was commissioned by the then Crown Prince and later King Friedrich Wilhelm II in 1786 to develop an educational concept for his son, who later became King Friedrich Wilhelm III. , to create.

As early as 1786 Campe founded the Braunschweigische Schulbuchhandlung, which he ran himself. The Duke promoted this project, knew how to protect the Enlightenment from the Prussian censorship , subsidized the purchase of a publishing house and granted postage free for the book shipments. Campe knew how to preserve his rights to his own books during this time without copyright and to earn even more from printing other people's works. The enlightened Campe, who originally wanted to protect his young readers from perishable novels, invented mass production in the German book trade.

A few days after the storming of the Bastille , Campe set off for Paris with his former student Wilhelm von Humboldt . They visited the revolutionary places together, had dinner with Mirabeau and took part in sessions of the National Assembly, including the night session of the 4th / 5th. August, which changed the state of France so fundamentally.

On August 26, 1792, Campe received, along with Friedrich Schiller , Friedrich Gottlieb Klopstock , George Washington , Johann Heinrich Pestalozzi and 16 other foreigners, the honorary citizenship of the Republic of France .

Campe's only daughter Charlotte, the model for “Lotte” in his Robinson adaptation, married the publisher Friedrich Vieweg in 1795 , who moved from Berlin to Braunschweig in 1799 and also took over the school bookshop.

Shortly before, the future bookseller, printer and publisher Friedrich Bernhard Culemann had completed his training at Campe.

In 1807 Campe became a deputy from Brunswick in Kassel, the capital of the Kingdom of Westphalia founded by Napoleon . Due to the increasing political reaction, but also because of the effects of a serious illness, he withdrew into private life.

In 1809 the University of Helmstedt awarded him an honorary doctorate in theology. Since 1810 he was a foreign member of the Bavarian Academy of Sciences .

On October 22nd, 1818 Joachim Heinrich Campe died in Braunschweig as a wealthy but almost forgotten man.

Campe developed German translations for numerous (approx. 11,500) foreign words , several of which were taken up in common usage, for example

No entry into everyday language found u. a. For:

Not Campe however, come Scheidekunst (even at Zesen well), hair curlers (after Grimm's Deutsches dictionary already at Kaspar Stieler : The Germans language pedigree and Fort wax .).

Campe (like Philipp von Zesen in earlier times ) is also wrongly ascribed to the creation of the word facial oriel for nose , at least there is no evidence of this in his writings. Presumably it is more of a parody of the suggestions of Campe and other language purists.

Campe's linguistic purism was not nationalistic, but motivated by enlightenment . Presumably under the influence of the high level of discussion among the simple population of France during the French Revolution , Campe tried to replace foreign words with words that were anchored in the language system, which were transparent and thus also understandable to the uneducated. With that, he hoped, these uneducated people would no longer be excluded from political events. Campe's primary objective was not to preserve linguistic purity, but to create something that would later be called “the public ”; Ultimately, his program was therefore emancipatory .

With regard to the development of a standard German language from the various German dialects, the fault line in the baroque language dispute ran mainly along confessional boundaries. Above all, southern German and Austrian clergy tried to establish a southern written language , while the scholars of the Protestant north preferred a High German written language based on the Meissen dialect. In this heated dispute at the time, Campe was clearly on the side of the northern version of the script, as presented by Johann Christoph Gottsched in 1748 . However, he turned against the formation of the standard language exclusively from Central German dialects , as Johann Christoph Adelung had practiced in his dictionary. Instead, he pleaded for a standard language that would consist of all dialects. It was not until 1784 that the baroque language dispute was finally decided, at least on a political level, when the Gottsched variant was introduced as the official language in the Habsburg crown lands. In this way, however, the Enlightenment principle of bringing writing as close as possible to what was spoken was not realized in the south of the German-speaking area.