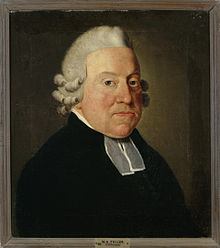 Wilhelm Abraham was a son of the theologian Romanus Teller . From 1749 he studied theology and philosophy in his hometown Leipzig . In 1761 he took over a chair at the University of Helmstedt . The Enlightenment theologian wrote important theological treatises. One of his works is the enlightenment textbook of the Christian faith , which was published in Halle in 1764 and triggered violent opposition in the central German states. He countered the impending narrowing of his sphere of activity by emigrating to Prussia. In 1767 he was appointed provost at the Petrikirche in Cölln and at the same time senior consistorial councilor at the Lutheran upper consistory in Prussia. Here he worked closely with his Lutheran colleagues Johann Joachim Spalding and Johann Samuel Diterich , but also with the Reformed court preacher August Friedrich Sack . He belonged to the Berlin Society of Friends of the Enlightenment . The Prussian Academy of Sciences elected him a full member in 1786.

He was a sponsor of the theologian Gottfried August Ludwig Hanstein , who succeeded Teller in all of his offices after his death.