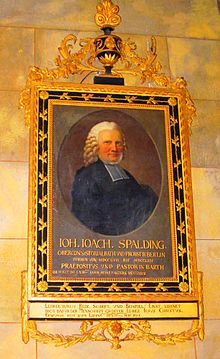 Johann Joachim Spalding (born November 1, 1714 in Tribsees , Swedish Pomerania , †  May 25, 1804 in Berlin ) was a German Protestant theologian , hymn poet, popular philosopher and the most important representative of neology in the Enlightenment .

Spalding had Scottish ancestors and was the son of the pastor of Tribsees in Swedish Pomerania . After first lessons at home by his father, he attended the Sundisches Gymnasium in Stralsund . Spalding then studied philosophy, theology and ancient languages at the universities of Rostock and Greifswald until 1734 .

For some time Spalding earned his living as a private tutor and was preparing for his doctorate. After receiving the title of Dr. theol. was awarded, he got a job as assistant preacher in his hometown in 1735.

In 1745 Spalding became secretary of the Swedish ambassador von Rudenskjöld in Berlin . In 1748 Spalding's first work, Consideration of the Determination of Man, appeared anonymously in Greifswald. Today it can rightly be seen as a manifesto of German Enlightenment theology. Spalding's little book is conceived as an inner monologue and completely dispenses with Christian revelation and dogmatic authority. It shows how an individual finally comes to the insight himself through “sensuality”, “pleasure of the spirit”, “virtue” and “religion” that he is destined for “immortality”.

In April 1749 Spalding was called to Lassan as pastor . On April 12th he wrote a letter to Johann Wilhelm Ludwig Gleim : “ ... I finally have an office because two days ago I received the royal power of attorney for the pastorate in Lassahn (a small town not far from Anklam) from Sweden have received. Perhaps in a few weeks I'll be a priest in all shape; but a priest in a small town! “He married Wilhelmine Gebhardi (1734–1762) from Stralsund, granddaughter of Professor Heinrich Brandanus Gebhardi from Greifswald . The couple had three sons and three daughters, including the later jurists Karl August Wilhelm Spalding (1760-1830), the philologist Georg Ludwig Spalding , professor at Gray Abbey was, and Johanna Wilhemine Spalding, which later became the theologian Friedrich Samuel Gottfried Sack married .

In 1757 Spalding settled in Barth as a preacher . In 1762 his wife died; after a reasonable period of mourning, he married Maria Dorothea von Sodenstern for the second time. In the summer of 1763, Johann Heinrich Füssli , Felix Hess and Johann Caspar Lavater from Zurich stayed at Spalding for a while. In this Helvetian-German dialogue, the consequences of Spalding's Enlightenment theology were discussed, which encouraged tolerance and pluralistic views in the proclamation of the Christian message. The meeting gave impetus for educational ideas across Europe.

In 1764 King Friedrich II. Appointed Spalding as provost to the St. Nicolai Church in Berlin and appointed him consistorial councilor . There and in the nearby St. Marien Church , Spalding soon gained influence through his sermons and became known far beyond the city limits. Professionally, he oriented himself towards the theologians August Friedrich Sack and Siegmund Jacob Baumgarten and thus also became a pioneer of the Enlightenment . Due to the Wöllner religious edict of 1788, Spalding resigned from all his offices and began to increasingly publish his ideas.

His second wife died in 1774, and the following year he married Maria Charlotte Lieberkühn. Johann Joachim Spalding died on May 25, 1804 in Berlin at the age of almost 90.

In Greifswald, Peter Ahlwardt introduced him to the works of the philosopher Christian Wolff , whose theories Spalding adopted and developed. But Spalding also dealt with the work of the English Deists , among them Joseph Butler , Francis Hutcheson and Shaftesbury , and partially translated them. Spalding's doubts about orthodoxy eventually led to neology, of which he later became the most important representative. As such, he vehemently opposed Julien Offray de La Mettrie and his materialism .

Committed to practical interests throughout his life, in his usability of the preaching office, which Johann Gottfried Herder heavily criticized in 1772, he rejected all hierarchical-sacramental views of church and spiritual office in order to instead identify the “preaching office” as a service to public morality. Finally, Spalding summarized his understanding of religion and morality, which went as far as identification, in 1797 under the title Religion, a Matter of Man .

In the cypresses of the later Pomeranian poet Karl Lappe it is said: “Ninety years of fame gave you a friendly fate, most worthy old man! Teacher who teaches piously, speaks beautifully of the value of feelings, beautifully of human determination! // Be proud, little Tribsees, of your big son! Remember Lassan! Boast of him, Barth! Should only venerate abroad where we ourselves are the heirs? "

On his 300th birthday, the city of Tribsees made him an honorary citizen posthumously and named a street after him.