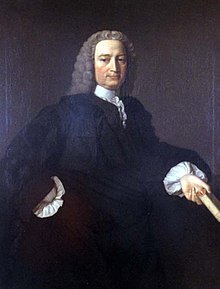 Francis Hutcheson (born August 8, 1694 in Drumalig , Kingdom of Ireland , † 1746 in Glasgow , Scotland ) was a philosopher of the (Scottish) Enlightenment and a (pre-) classical economist. Born in Ireland, he comes from an (Ulster) Scottish Presbyterian family.

John Hutcheson's son studied philosophy, literature and theology at the University of Glasgow from 1711, probably from 1710. He graduated in 1717 but remained in Glasgow for two more years as tutor to Lord Kilmarnock's son. In 1719 he founded a private academy in Dublin and became a preacher to the Irish Presbyterians . Ten years later he returned to Glasgow as a professor of moral philosophy (and successor to his teacher Gershom Carmichael ), where he remained until his death.

The work of the early Enlightenment was concerned with ethics and economics. It can be counted as part of the pre-classical economy . He was much more influential as a philosopher of ethics, as a logician and epistemologist. His ethics were prepared in Inquiry into the Origin of Our Ideas of Beauty and Virtue (1725) and continued in An Essay on the Nature and Conduct of the Passions and Affections, with Illustrations upon the Moral Sense (1728). His main work is the System of Moral Philosophy, published posthumously in 1755 .

Hutcheson, like Shaftesbury , opposed the psychological selfishness on which Thomas Hobbes had relied. Rather, he suggested that feelings of generosity and compassion were predominant. A job that is good in the moral sense is that which is motivated by the desire to love one's neighbor; yes, the larger the sphere of influence of work (the welfare of mankind), the higher it should be classified. With the expression "greatest happiness for the greatest number" [of people] he anticipated a key point of the utilitarianism of the English philosopher Jeremy Bentham .

In his view, people have - in addition to the well-known five senses - a number of other "inner" senses: u. a. for beauty, honor, the ridiculous or morality. He considered the latter to be the most important of our senses. He is the one through whom we perceive virtue or vice as such and which consequently arouses feelings of pleasure or pain in us. Like the other senses, the moral sense is innate. In 1738 he got into trouble with his superiors in Glasgow, claiming that man had this ability even before he had knowledge of God.

Hutcheson also clearly opposed the ethical rationalism of Samuel Clarke or William Wollaston . He insisted that while a course of action could be called “reasonable”, this did not mean that it was rationalized; rather, the motivation is always based on a feeling. Since - according to Hutcheson - it has not been proven that ratio can provide a guideline for our actions, it can neither provide moral motivation nor judgment criteria.